Open RAN (O-RAN) has seized the world's attention like few other specialist technologies and even become a vision for government authorities. The future is O-RAN, declared Oliver Dowden, the UK's secretary of state for culture, media and sport, in the summer. Politicians in other countries are similarly bullish.

The endorsement of a largely unproven technology by a man with no technical expertise  Dowden read law at Cambridge before entering politics  may have provoked sniggers in some learned telecom circles. O-RAN promises a more software-based network featuring products from multiple suppliers, in contrast to the single-vendor systems used today. But it has many questions to answer and obstacles to scale before it can establish itself as a viable mainstream alternative.

Industry hype has already thrown up some neck-craning forecasts that open RAN will generate tens of billions of dollars in sales by the mid-2020s. A more measured assessment comes from Omdia, a sister company of Light Reading. In updated forecasts out this month, it says open RAN is likely to generate about $3.2 billion in annual revenues by 2024, giving it about 9.4% of the total 4G and 5G market.

That still implies a massive increase on last year's sales of just $70 million, and Omdia's forecast has been raised significantly in the last few months. Previously, it was expecting open RAN to generate about $2.1 billion in revenues in 2024. 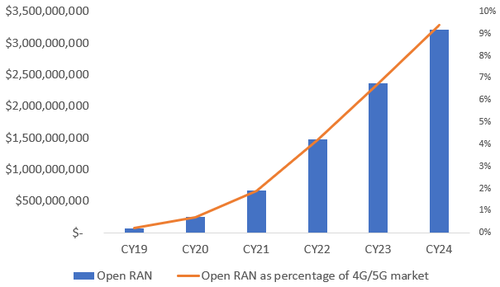 The latest update seems to reflect political and industry momentum behind the technology. Governments in some Western countries see it as a potential fix to the Huawei problem as they impose restrictions on the controversial Chinese vendor. Some operators are also enamored, confident open RAN will bring diversification to a market currently dominated by a handful of giant vendors.

That telco buy-in and support is critical, according to Daryl Schoolar, the practice leader at Omdia in charge of the forecasts. "Mobile operators remain the real driving force behind the development of open virtual RAN," he says. "I see this as a positive sign for the market versus other technology and network developments I have seen during my career that were driven by vendors and ultimately went nowhere."

On the operator side, the pioneers of the technology include Japan's Rakuten, which already operates a 4G and 5G network based on open RAN. While customer numbers remain low, its early success has undoubtedly encouraged others. Among them is Dish Network, another greenfield builder that is using open RAN technology to roll out a fourth mobile network in the US.

"The bigger market opportunity is with brownfield deployments, but this takes more time to accomplish as operators have to integrate open RAN with their legacy network systems and make sure those legacy networks and services are not adversely impacted," says Schoolar.

In a paper about the latest numbers, Omdia notes that open RAN is a potential dilemma for the big kit vendors like Ericsson and Nokia. The risk is that it chews into their market share, as service providers opt for open RAN products developed by alternative suppliers. Yet open RAN might also bring opportunities in new markets for the old guard. "Either way, vendors cannot ignore this market trend," says Omdia.

Gabriel Brown, a principal analyst at Heavy Reading, another sister company to Light Reading, says he is positive about open RAN but warns against expectations of liftoff next year. "The right timeline to view it on is a four-to-five-year timeline," he said in a discussion with Light Reading this week. "I think next year continues to be primarily trials, scaling the trials ... and some operators moving into production networks, but I don't think it's the year when it all takes off."

One thing to watch next year will be what comes out of the silicon ecosystem, said Brown. "[That] is going to have a huge impact on the performance of open RAN, the cost point, how practical it is to build these things, but I think that takes a few years to come through."