MPEG LA and Unified Patents late last month announced a patent pool for open RAN equipment called Alium. According to the companies, the pool's goal is to support "the development of open RAN by providing a solution to the uncertainty and risk posed by the more than 100,000 essential patents already self-declared." 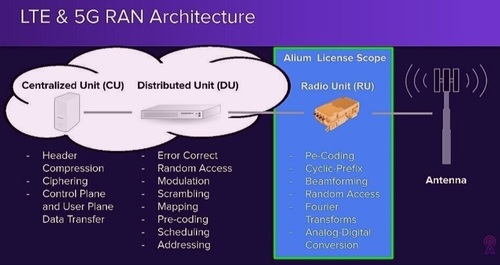 Alium is targeting a specific area of open RAN hardware. Click here for a larger version of this image.
(Source: Alium)

However, some vendors in the open RAN space were guarded over the prospect of putting their open RAN patents into a pool.

"Unfortunately it's too early for Nokia to comment here," wrote a spokesperson for the company in response to questions from Light Reading on the topic. Nokia is one of the world's largest wireless equipment vendors and offers products for both traditional, "classic" RANs as well as open RAN networks.

Keith Johnson of Parallel Wireless, one of several smaller vendors hoping to cash in on the open RAN trend, said the company supports clarity in patent licensing. But he stopped short of commenting directly on Alium. "A best-of-breed ecosystem of open RAN hardware and software vendors enables flexibility and increased competition, leading to lower total costs of ownership (TCO) and innovation in the telecommunications industry," he said in a statement provided to Light Reading. "Broadening the supply chain and ensuring clear IP [intellectual property] rights is a prominent sign of the maturing open RAN ecosystem driving technical leadership in wireless networks."

And Amit Jain, founder and chief commercial officer of Verana Networks, a startup hoping to make open RAN equipment, suggested that patent pools could be valuable to small vendors like his. "However, for this patent pool to work, Alium would have to persuade large RAN equipment vendors that own most of the 3GPP SEPs [standard essential patents] to participate, and it is unclear if there is a sufficient incentive for them to do so," he wrote in response to questions from Light Reading.

But Airspan said it would consider the pool. "As a leader and innovator in 5G and Open RAN, Airspan plans to explore this option and several others that can help us innovate and better serve our customers," Airspan SVP of Technology and Marketing Abel Mayal said in a statement to Light Reading.

In its launch announcement, Alium argued that a patent pool would speed up the development of open RAN technology. The group "was created to do that by providing a license of convenience for Radio Unit vendors to help decrease uncertainty in patent licensing fees related to their products while also providing compensation to patent holders for developing the technology," Alium wrote.

The uncertainty of open RAN

Some of the biggest network operators in the world have specifically pointed to the cloudy patent-licensing landscape as a drawback to using open RAN equipment.

"Access to Standards Essential Patents on Fair, Reasonable and Non-Discriminatory (FRAND) terms is another important factor as it will limit the uncertainty around intellectual property right infringement challenges that delay the development of new technologies such as open RAN," Verizon wrote in a government filing last year.

And T-Mobile's networking chief, Neville Ray, said in 2020 that "O-RAN for me is interesting at this point in time, but there's a host of unanswered questions around IP, around R&D, around system integration."

According to patent-monitoring publication IAM, Alium hopes to announce its first members sometime in the next few months. To join the pool, open RAN patent holders must have at least one essential open RAN patent, as decided by an independent expert hired and paid for by the pool.

Alium participants will get access to all the essential patents held by other participants, according to Florian Mueller, an intellectual property expert who maintains the Foss Patents website. They'll also have the ability to challenge other patents not covered by the patent pool. "This is a unique combination. All other patent pools that I know are neutral with respect to patents outside a given pool," Mueller wrote.

Alium will also leverage artificial intelligence (AI) technology from Unified Patents, as well as manual reviews, to determine the value of patents, including the share of money each participant in the pool might receive from their patents. This, according to Alium, is important because "it is prohibitively expensive and time consuming to manually review and claim chart each patent that potentially could be essential to the open RAN standard."

In its launch announcement, Alium also released its patent-licensing rates: Fees start at $25 per unit and go down to $10 for all units sold after the first 200,000. 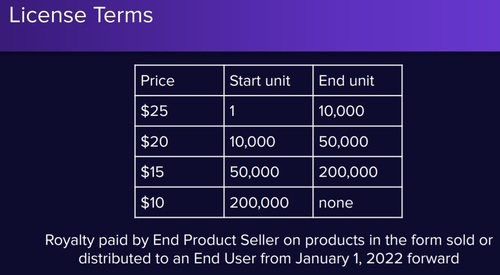 Despite the fact that it doesn't have any announced members, Alium released its patent-licensing fees. Click here for a larger version of this image.
(Source: Alium)

"While pools can create transactional efficiencies, this pool is designed to serve those who may have to defend themselves against infringement litigation brought by companies that don't contribute patents to that particular pool," summarized Mueller, of Foss Patents.

A history of the future

It's also worth noting that this isn't the first patent pool in the global wireless industry. Roughly a decade ago, both Sisvel and Via Licensing announced patent pools for LTE technology.

According to its website, companies including Airbus, KPN, 3G Licensing, Orange, MELCO and Fraunhofer HHI participate in Sisvel's patent pool. On its own website, Via lists participating patent licensors ranging from AT&T to Dolby Laboratories to Google to HP to Marvell to NEC to SK Telecom to Telefonica to Verizon to Vodafone.

The existence of patent pools hasn't stopped some of the market's biggest players from going after each other. For example, just this month Ericsson and Apple appeared prepared to slide into a potentially significant courtroom clash over the value of their respective 5G patents.