Making it easier to use one supplier's radios with another's baseband products should broaden choice and spur competition. Such is the basic premise of open RAN, a system that would already have conquered the planet if it were deployed as much as it has been discussed. But for those who see open RAN as a pathway to supplier diversity, the recent signs have not been encouraging.

The latest comes from Dell'Oro Group, a research firm that tracks the radio access network market. The good news for open RAN supporters is that open RAN "continues to move forward and accelerate at a faster pace than expected," said the company in its latest update. Third-quarter sales doubled year-on-year and open RAN is now expected to account for between 6% and 10% of the total RAN market next year. If that generates about $43 billion in revenues next year – as forecast by Omdia, another research firm (and sister company to Light Reading) – open RAN would claim between $2.6 billion and $4.3 billion.

The potentially bad news, according to Dell'Oro, is that the broader market is still dominated by a small number of big players. It reckons the top five suppliers – Huawei, Ericsson, Nokia, ZTE and Samsung – have collectively lost less than one percentage point in market share since last year. 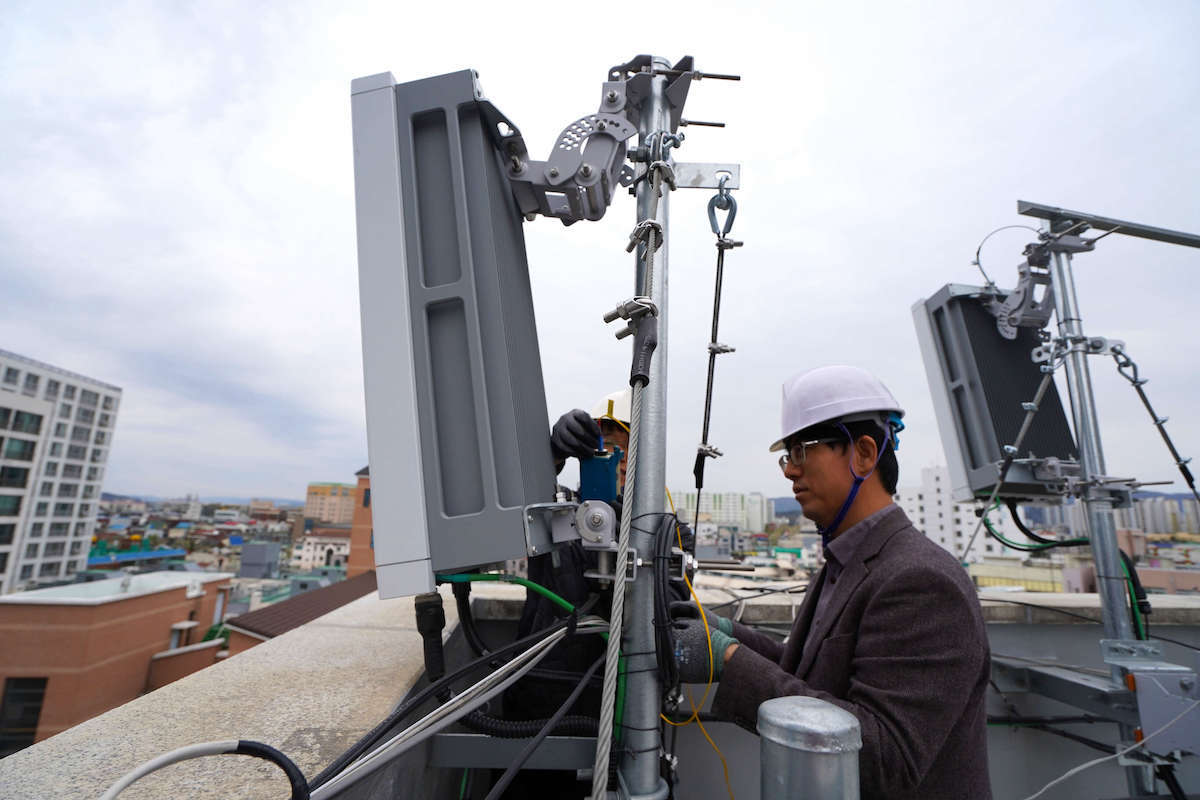 An Ericsson radio being installed in South Korea.
(Source: Ericsson)

The implication is that some of the open RAN business has gone to these giants. Huawei remains publicly opposed to it, and Ericsson has no comprehensive open RAN offer. But the other vendors in that list are supportive to varying degrees. And Samsung has been the entire market's biggest open RAN winner so far, says Dell'Oro.

NEC, Fujitsu and Mavenir were the other top vendors of open RAN products over the first nine months of this year, according to the market-research company. All now pitch themselves as "end-to-end" suppliers rather than specialists focused on one bit of the value chain. Combining specialists turns out to be fiendish, even with the new interfaces cooked up by the O-RAN Alliance, a specifications group. Single-vendor open RAN would avoid the hassle of systems integration.

Outside Japan, there has been scant evidence of successful multivendor projects so far. Vodafone is relying mainly on Samsung for a 2,500-site swap out of Huawei in the UK, and only one site is currently active. Dish's list of suppliers is longer than War and Peace, but its rollout has been mired in technical and financial difficulties. Even in Japan, Rakuten's multivendor status is questionable and certainly unusual because it owns most of the software it has deployed – including the baseband products developed by its Altiostar unit.

"The lion's share of the deployments to date have been multivendor, though this ratio started changing in the first half as the brownfield share outside of Japan is growing," Stefan Pongratz of Dell'Oro said in an email exchange with Light Reading in September.

Some people involved in open RAN now dispute whether the more clichéd examples of multivendor rollout are even desirable. "It is not about mixing and matching Nokia and Ericsson," said Joel Brand, a senior director of product marketing for chipmaker Marvell Technology. "There is no value in that."

Nor does Brand think the current market is too concentrated. "On the radio side, you have Ericsson, Nokia, Samsung, Fujitsu and NEC outside China," he added during an interview with Light Reading at the recent FYUZ event in Madrid. "We've got five vendors – two strong ones and three to kind of keep them honest – and that is how these industries work. It is not particularly unique to wireless or that we are screwed here. We need to keep in check what we are trying to do, and this is not about building an ecosystem of 100 players."

Buoyed by a 5G deal with Nokia, Marvell is now developing merchant silicon that other vendors could potentially use in open RAN deployments. Describing 5G as one of its big growth areas, it today reported third-quarter revenues of about $1.5 billion, up 27% year-on-year, and swung to a net profit of $13 million from a loss of $63 million a year earlier, although its share price fell nearly 7% in premarket trading on a warning about weaker demand for some of its products.

"I'm an enormous fan of open interfaces that allow smaller companies to plug in their stuff and innovate and for me that is what open RAN is about," said Brand in Madrid. He is clearly excited about the prospect of software innovation through the RAN intelligent controller, a feature conceived by the open RAN community, and the real-time applications this might support.

Dell'Oro's update, meanwhile, will prompt lots of conjecture. Ericsson claims its RAN market share outside China has risen by six percentage points since 2017, to about 39%. That has probably come at the expense of Huawei, increasingly seen as a pariah in some countries, and Nokia, whose market share previously dipped because of 5G problems. If Huawei were more acceptable, and Nokia had never stumbled, it is doubtful whether the top five vendors would have lost any market share at all.

Update: This story has been changed since it was first published to incorporate the latest forecast by Omdia, which expects RAN revenues to be $43 billion next year rather than the $41 billion previously stated.