Open RAN no sure winner, but back it anyway, says UK report

Open RAN spent last year as a plucky but weak challenger with excellent PR and a receptive audience. If it were a sportsperson, it would probably be Eddie "the Eagle" Edwards, a chirpy ski jumper who represented Great Britain in the 1988 Olympics but finished dead last by some margin, less eagle than flightless duck. Edwards captured the public imagination that year like no other skier. His story was eventually turned into a Hollywood movie.

The authorities were not impressed, though. After the Calgary Olympics, they tightened up entry requirements to prevent any repeat mockery in future. Open RAN is under similar scrutiny this year. Rule makers in the UK are taking a hard look at the ambitious mobile technology, and they are worried about its waddling technique and generally questionable form. If it wants to be a serious competitor, it will have to shape up. 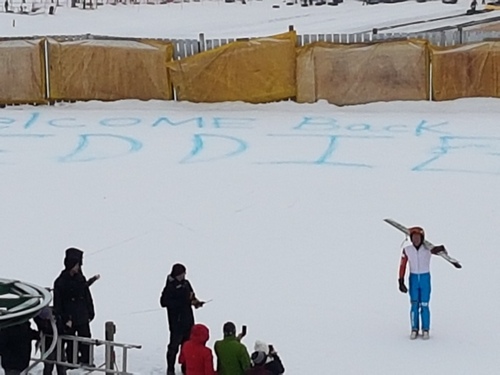 A detailed report from the parliamentary Science and Technology Committee about 5G diversification holds up several red flags, without disqualifying open RAN at this stage. The committee is clearly intrigued by the new technology and thinks the government should encourage it as a coach would a prospective Olympian. What's clear, though, is that "the success of open RAN is not guaranteed," it states.

Much like Edwards in 1988, open RAN tends to come up short. Despite the protestations of several promoters, who insist on its competitiveness, most operators remain unwilling to give it a run on their most demanding pistes. Orange, a French operator that is rooting for open RAN, doubts it will achieve "parity" with older competitors before the mid-2020s. The Science and Technology Committee heard from others who warned "it would take several years before it could be ready for widespread adoption." Note the use of "could."

The UK government desperately wants open RAN to measure up. Last year, it took fright at US sanctions against Huawei, whose products are widely used by UK operators, and promptly decided to ban the Chinese vendor from its 5G market. Now it is left with the Nordic duopoly of Ericsson and Nokia. "If one of them goes out of business or starts to do interesting commercial practices, you have a resilience risk for the long-term security and resilience of the network," said Ian Levy, the technical director of the National Cyber Security Centre.

That largely explains why the Science and Technology Committee thinks the government should back open RAN. If it does reach "parity" with older technologies, as Orange expects, then its pioneers may be the only alternative to a perpetual duopoly. Indeed, one of the most striking things about the parliamentary report is the lack of suggestions that do not involve open RAN. It looks stumped, merely advising the government to "pursue a range of measures designed to support diversification and increase security."

It is happy enough to point out the gaps in the government's strategy, though. "There appear to be good opportunities for the government to support new market entry at the same time as driving deployment of 5G in the UK, but the diversification strategy fails to set out measures to achieve this," it writes.

To its credit, it also recognizes that public funding is not the answer. A £250 million ($343 million) commitment for new 5G testing facilities is paltry alongside the "tens of billions of pounds" that incumbent vendors spend annually on 5G, authorities point out. Others might be less charitable about what could seem a wasteful use of taxpayer money during an economic crisis. But the situation could be far worse. Germany's government will reportedly squeeze its citizens for about 2 billion ($2.4 billion) to throw at open RAN.

Deutsche Telekom, Germany's biggest operator, has also urged its government to mandate the use of open RAN in future telecom legislation. This seems unlikelier in the UK after Marcus Weldon, the former chief technology officer of Nokia, warned the Science and Technology Committee that open RAN was only "one option" for achieving better interoperability. Nor is it clear that all service providers are vigorously opposed to buying customized, integrated systems. Three UK, which recently named Ericsson as a Huawei replacement, has little interest in using open RAN for 5G.

Even if open RAN takes off, there is simply no guarantee it will produce sustainable rivals to Ericsson and Nokia, authorities acknowledge. The Nordic vendors may be worried about the consequences of an open RAN transition for their own traditional business. But Kodak is a lesson in what can happen to companies that do not adapt to the times. Accordingly, both companies are making open RAN moves. And they have the financial muscle to buy or undercut open RAN specialists.

Open RAN or otherwise, building a huge equipment maker from scratch could be mission impossible. "The chances of creating another Nokia in the UK are close to zero, and I'm not sure it would be the right thing anyway," said Ian Livingston, the head of a UK taskforce set up to explore alternatives (and a former CEO of BT), during one of the committee's briefing sessions last year.

Andy Sellars has similar doubts. He is the strategic development director at the Compound Semiconductor Applications Catapult, a non-profit research and technology association that advises industry and government on the semiconductors now critical to so many sectors of the economy. "To create an OEM [original equipment maker] is a major challenge, requiring perhaps five to ten years of sustained intervention, and I'm not sure that's the right thing to do," he tells Light Reading.

How the UK might thrive is by focusing on specific elements where it already has expertise, he reckons. Disaggregation could help UK specialists to compete. "We should focus our efforts on critical parts of the network, where the UK has expertise and capability, and which lead to sustainable business models  for both domestic and export markets," says Sellars.

Yet disaggregation covers a much broader range of technologies than just the radio access network, and much of the existing UK expertise is arguably in other areas. Parts of north Yorkshire and County Durham, for instance, are home to companies developing the radiofrequency technologies used in some backhaul networks. Filtronic is the most prominent.

What about the rest of the network?

There is much to commend the parliamentary report. It provides a detailed and thorough assessment of the challenges in the radio access network. It demythologizes an overhyped technology and recognizes open RAN is not a "miracle medicine," in the words of John Strand, the CEO of the Strand Consult advisory group. But it reveals a certain cluelessness. Its red flags about open RAN outnumber any positive signals, and still it advises the government to "support open RAN."

It fails badly in two other respects, too. The first is a total disregard for anything bar the radio access network, which is only one 5G domain, accounting for just a fifth of total wireless expenditure. There is zero mention anywhere in the report of fiber or backhaul, and only three cursory references to the core. Either authorities do not think these are "critical" technologies, or they are simply missing the bigger picture.

Its other shortcoming is a failure to look beyond 5G to the late 2020s. Except in a comment made by an executive at Samsung, there is no discussion of 6G whatsoever. Yet even if open RAN defies its critics, it has probably come too late for a mobile standard that has already been launched worldwide.

"It's likely to be significantly more important in future, but getting rather overhyped," says Dean Bubley, an analyst at Disruptive Wireless, in his own report on diversification. "Perhaps it will form the centrepiece of 6G, but for the main elements of 5G macro RANs, which are being deployed now, it is going to be secondary."