Nokia is making a risky bet on open RAN

"We will do whatever it takes to lead in 5G," said Pekka Lundmark, Nokia's new boss, as he outlined his vision to reporters several weeks ago. Today, his strategy became a bit clearer. Determined to revitalize the mobile business after mishaps under previous management, Lundmark has named open RAN, a new-fangled technology that delights some of Nokia's big customers, as one of his priorities.

It works by allowing products from different suppliers to be used interchangeably and in parallel. Mainstream networks require operators to buy everything for a given site from the same vendor, a phenomenon uncharitably described as "lock-in" by disgruntled customers. Open RAN should allow them to mix and match vendors. Thanks to "virtualization," open RAN software should also be compatible with general-purpose kit, rather than the customized equipment sold by Nokia and its competitors. 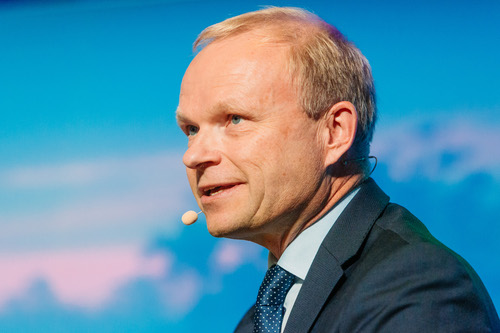 Nokia's Pekka Lundmark is under pressure to turn around the Finnish vendor.

Nokia has always been more enthusiastic about open RAN than chief rivals Ericsson and Huawei, which have seemed wary of the possible threat to their business. As the smallest of the big three radio access network (RAN) vendors, the Finnish firm has probably spied an opportunity to be disruptive. But in deciding that open RAN should be a focus for his mobile networks division, Lundmark is making a gamble.

One risk is that open RAN does not take off as quickly as supporters hope. Analysts have wildly diverged on their revenue projections, with some forecasting an open RAN market worth tens of billions of dollars by the mid-2020s. More cautious assessments come from Omdia, a sister company to Light Reading, and Dell'Oro, used by Ericsson and Nokia for market sizing. Omdia expects the new technology to generate about $3.2 billion in 2024. Dell'Oro broadly concurs. This would give open RAN only about 10% of the total RAN market by the mid-2020s.

Nokia is not about to give up traditional RAN, of course, and Lundmark sounds under no illusions about the immediate future for open RAN. "It is coming but not a needle mover in the short term," he told analysts on a call earlier today. Even telco enthusiasts for open RAN concede it falls short on performance in the most challenging environments.

At the same time, they are sure to welcome an R&D commitment by one of the world's biggest vendors. A major injection of funding could be a massive boost for open RAN, helping to smooth out some of the technology's performance wrinkles.

The possible worry for investors is that open RAN becomes a distraction from mainstream 5G, where Nokia is already under pressure to catch up. Past blunders include its choice of expensive programmable components for its 5G products when rivals were opting for customized but lower-cost chips. Profit margins at Nokia have suffered, giving it less wiggle room on pricing. It is phasing out the programmable chips but does not expect to complete this process for a couple of years.

In the meantime, financial constraints have forced Nokia to cut R&D spending, which fell to 4.4 billion (US$5.4 billion) last year from nearly 5 billion ($6.1 billion) in 2016, when Nokia had just completed its 15.6 billion ($19 billion, at today's exchange rate) takeover of Alcatel-Lucent. The company insists that spending on 5G has risen but has not broken out the figure. A new structure, under which mobile is a separate division, should improve transparency.

Lundmark appears to hope investors will have patience. At the mobile business, which accounted for nearly half of company revenues in the recent third quarter, the short-term profitability outlook is bleak, with Nokia expecting only to break even next year at the operating profit level. Guidance for a company-wide operating margin of 7-10% is based on the outlook for other new divisions.

When it comes to open RAN, the other risk is that Nokia is effectively building its own funeral pyre. Open RAN interests operators mainly because it promises to boost competition to Ericsson, Huawei and Nokia, according to a recent survey by Heavy Reading, another sister company to Light Reading. Rakuten, a Japanese company building an open RAN network, has picked Altiostar and NEC as its main 5G partners. Dish in the US is working with Altiostar, Fujitsu and Mavenir. Vodafone, which plans to substitute open RAN for Huawei at about 2,600 UK sites, seems determined to avoid Ericsson and Nokia.

Not everyone is convinced this "diversification" will go far. Appledore Research has just published its own forecast of open RAN product revenues over the next six years, anticipating a market worth $11.1 billion in 2026. As much as $8 billion of that will accrue to "traditional incumbents" building single-vendor open RAN networks, it says. 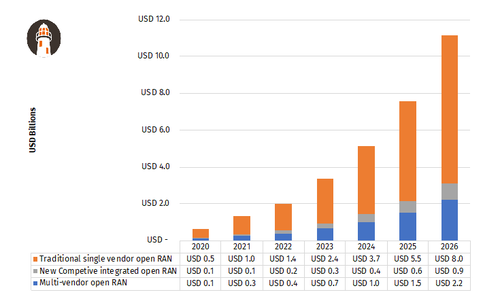 "There is so much to be done in terms of investment to develop a new baseband system, a new radio unit and so on," said Sandro Tavares, Nokia's head of mobile network marketing, during a recent conversation with Light Reading. "There are not a lot of companies out there that even with an open interface are going to be able to navigate this market."

Diversity will come in other areas, he thinks. An open RAN feature called the RAN Intelligent Controller (RIC), which is attracting interest, would support efforts by third-party developers to create new network applications for performance improvements, for instance. Using a VMware-provided RIC in lab trials earlier this year, Deutsche Telekom was able to boost radio performance through a software application developed by California's Cohere Technologies. The German operator has just called out Nokia as a key European partner for open RAN development.

If Appledore and Tavares are wrong, Nokia could inadvertently provide an R&D stimulus that ultimately benefits smaller RAN vendors. Unless it can also seize the initiative in the market for traditional 5G products, that would be a dangerous development indeed.