"They have some work to do to catch up," summed Emil Olbrich, VP of networks with Signals Research Group (SRG), in comments to Light Reading. He said Dish's 5G network in Vegas isn't as good as T-Mobile's 5G network in the city, but he said it's still early days for Dish and the company likely will improve its offering.

"They're going to have some issues," Olbrich said of Dish's efforts to refine its network in Vegas.

What happens in Vegas 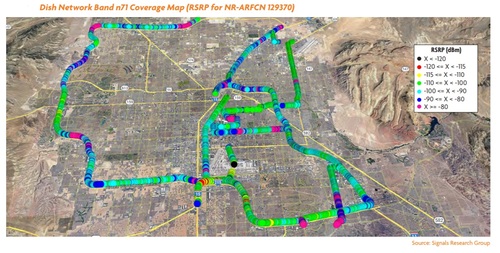 SRG's early drive tests of Las Vegas help show some of Dish's 5G coverage in the city.
Click here for a larger version of this image.
(Source: Signals Research Group)

Olbrich explained that most cell towers have either two or three sectors, or unique cell site IDs. Thus, he said he's relatively certain that Dish is operating at least 100 cell towers in the city of Las Vegas.

There are a number of factors that determine the performance capabilities of a wireless network. One is the type of spectrum used  for example, due to the propagation characteristics of 5G in Dish's 600MHz lowband spectrum, signals in that band can often travel for several miles.

However, another factor is the amount of spectrum employed. The more spectrum an operator uses, the faster the speeds they can provide. For example, T-Mobile has already deployed 100MHz of spectrum in the 2.5GHz band across large portions of the country; as a result, the operator is boasting of speeds around 300 Mbit/s.

Dish, on the other hand, is only deploying a total of around 40MHz of spectrum in Las Vegas. Olbrich suggested that design won't be able to support very speedy 5G connections when compared with other 5G operators. He said SRG wasn't able to conduct actual speed tests on Dish's network because the firm wasn't able to obtain any actual phones that can access the network.

Dish officials have acknowledged the company's network will be a work in progress. "Certainly, speeds are important," Dish's Charlie Ergen said earlier this year. But he said that not everybody needs "a Lamborghini that goes 280 miles an hour ... I think as long as we make something that goes 100 miles an hour, we'll be in pretty good shape. So I think we'll look at consistency."

Olbrich said SRG's early tests of Dish's network can only go so far. For example, he said the company couldn't determine Dish's 5G equipment suppliers, though he believes Japan's Fujitsu is supplying the radios atop Dish's 5G cell towers in Vegas.

He also said he could not tell whether Mavenir or Rakuten's Altiostar is providing Dish's network management software in the city. He said that's an important function because Dish will need to mitigate interference between its cell towers in order to provide speedy, reliable connections.

Dish Network had hoped to turn on its Vegas network sometime this year, but that launch was delayed. During Dish's earnings call in early November, the company said it is offering a 5G beta service in Las Vegas with an unspecified number of employees and other "friendly" users.

[Ed. note: The headline of this article was changed to better reflect the story's theme and the content of the networks tests performed.]