From the US to Japan, today's nascent open and virtualized radio access networks nearly all have Intel inside. It is an awkward reality for champions of the concept. Open RAN is supposedly about fomenting competition. Replacing the RAN oligopoly of Ericsson, Huawei and Nokia with an Intel chip monopoly sounds like the opposite.

Nor have Intel's x86 processors looked well suited to the job of baseband processing. "If you have an ASIC [application-specific integrated circuit] for baseband processing, it is always cheaper than using a general-purpose processor like an Intel processor," said Alex Choi, the head of strategy and technology innovation for Deutsche Telekom, about two years ago.

Solutions may now be arriving. In the run-up to this year's Mobile World Congress, Marvell, another chipmaker, has just unveiled a new processor that fits into an accelerator card designed by Dell. Based on a system called "inline" acceleration, it is designed to shoulder the burden of baseband or Layer 1 processing and do it more efficiently than x86. A Marvell representative claims it will boost open RAN performance and support a move "away from Intel." 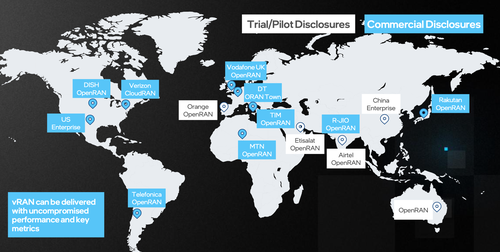 Nor is Marvell's the only inline accelerator in town. Qualcomm, which also relies on chip blueprints supplied by UK-based Arm, has teamed up with Hewlett Packard Enterprise on a rival offer. Branded the X100 5G RAN accelerator card, it also uses inline acceleration and works  in Qualcomm's words  by "offloading server CPUs [central processing units] from compute-intensive 5G baseband processing."

The anticipated product launches will be welcomed by operators backing open RAN. European enthusiasts have held off making investments in the technology, partly out of concern about energy efficiency and performance in busy urban areas. Scott Petty, Vodafone's chief digital officer, has complained that open RAN vendors will not look competitive equipped with only x86 processors. "Now they need to deliver, but it will require some dedicated silicon. It won't be Intel chips," he told Light Reading in late 2021.

Intel is not about to relinquish its position without a fight, though. While Marvell and Qualcomm are promoting the "inline" concept, Intel is pushing an alternative form of acceleration called "lookaside," which continues to rely heavily on the x86 processor, offloading some but not all Layer 1 functions. This week, Intel announced its own product refresh based on Sapphire Rapids, the codename for its next-generation server processors.

The other innovation is the promise of integrated acceleration in future Sapphire Rapids processors. Sachin Katti, who works as chief technology officer for Intel's network and edge group, said this would combine the benefits of inline acceleration with the flexibility of x86. That is preferable, he insisted, to any solution "that shoves an entire Layer 1 into an inflexible hardware accelerator"  a clear dig at inline rivals such as Marvell and Qualcomm.

Despite Katti's reference to inline acceleration, Stanley does not think it is Intel's focus. "None of this rules out an inline acceleration solution, but it does not seem to be part of the core approach," he told Light Reading. "The key strategy is to add maximum value to Xeon Scalable processors and enable external acceleration where needed to achieve performance goals."

Both inline and lookaside involve trade-offs. Inline's backers have promised Layer 1 software alternatives, but Intel has a major head start with FlexRAN, which it began developing way back in 2010. That means lookaside may be a lot more straightforward. "The processor is in control of everything that goes on," said Stanley during a previous conversation with Light Reading. "It is essentially the same software and makes life very easy."

Bigger operators seemed more enthusiastic about inline, however, during a Heavy Reading survey last year. By cutting out the processor, it would reduce latency, a measure of the delay that occurs when signals are sent over the network. That could also weaken Intel, reducing power needs and allowing companies to use less costly CPUs. "If you use inline, you probably need a less powerful processor and less expensive server platform, which is not necessarily something Intel wants to promote," said Stanley last year.

The competitive environment will surely grow tougher for Intel with the emergence of new rivals and alternative technology options, and Stanley has a positive take on the update by Dell and Marvell. "This is a significant investment by Dell in open RAN and vRAN and a great boost for Marvell and the inline approach," he said.

If it continues to build traction, open RAN could be a growth opportunity for all the big chip vendors. Dell'Oro, a market-research firm, reckons the RAN market is currently generating between $40 billion and $45 billion in annual revenues. Open RAN will account for 15% of sales in 2026, it has predicted. But the days when Intel went unchallenged seem to be over.