Here's how much a 5G wireless network really costs

Have you ever wondered how much a 5G non-standalone Evolved Packet Core for up to 50,000 subscribers costs, including the installation and everything? Sure you have.

Or what about the software license fee, per subscriber, for a 4G Internet of Things system? That, my friend, could cost between $0.02 per customer all the way up to $1.04 per customer, depending of course on the vendor supplying the license.

But what about a more traditional wireless network equipment purchase? How about the rack-mounted baseband unit (BBU) for an LTE network? That's just $7,461 (for the cheap stuff) or $54,773 (for the pricy versions).

Yeah, sure, you say. That's all well and good. But what about network construction costs? You'll have to factor those in too, right?

That's certainly true. So here's the high end of what it might cost you to rent a helicopter that can lift your 5G radios on top of a cell tower: $76,000. (That's the price for up to 3,200 pounds of equipment and the 6-hour day rate plus the hourly rate. It doesn't include the setup costs though.)

Brought to you by the US government

Those examples are a handful of the hundreds of wireless network prices recently published by the FCC. The collection of this incredible trove of data was funded by the US taxpayer and assembled by Widelity, which provides business and network engineering and consulting services for telecom operators and others.

"Through our interviews, we have obtained current cost ranges for equipment, software and services from equipment manufacturers and service providers (e.g., tower crews, attorneys, RF engineers, and field engineers)," the company wrote in its new 152-page report. "In some cases, we were either provided a range of costs or quoted different costs for similar equipment or services by multiple sources. In those cases, we provided the range of costs we received. It is possible that tower crews, engineering services and some other costs may rise with high demand."

Why is the US government funding this work? Widelity is the firm the FCC turned to in order to implement its "rip and replace" program, which targets equipment from Chinese vendors Huawei and ZTE. Congress allocated almost $2 billion to that program in order to pay US wireless network operators like United TelCom, Viaero, James Valley Telecommunications (JVT), NE Colorado Cellular, Union Telephone Company and others to replace their "untrusted" network equipment with equipment from vendors that are not based in China.

But to implement that program, the FCC apparently needs to know how much that replacement equipment is going to cost. Therefore: Behold, the US government's wireless network pricing catalog: 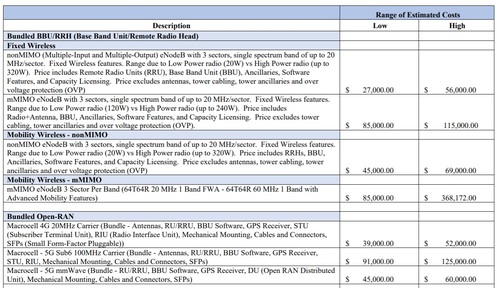 The above is just a small selection of the data available in Widelity's new report. Click here for a larger version of this image.
(Source: Widelity/FCC)

The data is impressive, to put it mildly.

The difficulty of accurate data

"The Widelity report is eye-opening in the level of detail it provides around number of elements that go into the price of network and how much of the cost of the build is something other than actual network equipment and software," noted Daryl Schoolar, the practice leader for fixed and mobile infrastructure for research and consulting firm Omdia. Omdia and Light Reading are both owned by Informa.

However, Schoolar cautioned that the prices in Widelity's report  intended for smaller network operators with Huawei and ZTE equipment  might not line up exactly with the prices that behemoths like Verizon, for example, might pay for its planned $10 billion C-band network buildout.

"Pricing out a network has similarities to buying a car. There is a list price and then there is what you actually pay. What you pay is all based on volume, such as individual purchase or fleet purchase, how you pay, vehicle options, and service contracts," Schoolar continued. "Widelity's FCC report reflects that in both its methodology and in the pricing section by providing ranges. Getting accurate network pricing is very difficult due to the high number of factors involved, one of them being the volume or size of the overall deal. Size of deal has a major impact on cost of network elements in the build. Smaller rural operators pay more per site than a Verizon or AT&T that build out 100,000s of sites."

Thus, it's no surprise that Widelity's report generated some debate among the companies that it presumably covers (the report doesn't name any specific vendors).

Comments on the report ranged from the banal to the provocative.

"The current catalog only includes Internet of Things (IoT) software licenses associated with core network nodes," Ericsson told the FCC. Ericsson is one of the world's largest wireless network equipment vendors. "However, this does not reflect the need to replace existing machine-to-machine (M2M) and IoT software licenses in the Radio Access Networks (RAN) nodes as well. The catalog should reflect these licenses exist (and thus need to be replaced) in the core and the RAN."

A debate over open RAN

"Because open RAN affords the opportunity to promote domestic innovation and manufacturing  at lower cost than proprietary RAN equipment  while at the same time securing and future proofing our 4G LTE and 5G networks, the commission should prioritize funding to those operators seeking to use open RAN over proprietary RAN," argued open RAN vendor Mavenir.

But that's not true, according to Finland's Nokia, which is one of the world's biggest suppliers of 4G and 5G equipment.

"The draft cost catalog also demonstrates that there are not cost savings being offered through open RAN equipment estimates compared to integrated RAN estimates," the company noted to the FCC. "While there are minor differences in proposed costs at the low and high end of the spectrum, the heart of the pricing range is the same for open RAN and integrated RAN as set out in the catalog."

But the reason for that, according to at least one open RAN vendor, is that some open RAN equipment prices are simply not listed.

"For example, some of the lower bound cost estimates listed in the cost catalog are as much as three times (3x) the price Airspan currently offers for equivalent hardware and other network elements," Airspan wrote to the FCC. "And network equipment and services are becoming less expensive by the day due to the ongoing evolution of network architecture design and equipment manufacturing. Accordingly, the [FCC] bureau should ensure that when federal funds are being used to reimburse carriers for replacing their network equipment, the price paid for such equipment is competitive."

The world is not enough

Finally, it's worth noting that some entities involved in the issue are viewing the FCC's "rip and replace" program as a good opportunity for taxpayer-financed network upgrades. For example, the Rural Wireless Broadband Coalition suggested that operators use the program to swap out aging microwave backhaul equipment supplied by Chinese vendors with speedier fiber connections  and that the cost catalog should be updated as a result.

And what of the additional costs for fiber when compared with microwave? "By promoting fiber replacement now, the commission will significantly increase the quality of rural networks that can be leveraged to assist health care facilities, schools, libraries and local businesses, all of which are likely to seek access to nearby fiber," the coalition argued.

Such comments are partly why the price tag associated with the "rip and replace" program has ballooned from around $700 million to $2 billion in roughly two years. Already some commenters are suggesting $2 billion won't be enough.