FYUZ wrap: Open RAN in denial and a dose of metaverse envy

Omantel employs a senior technology strategist called Sherif Sherif, which is not dissimilar to the Magnus Magnusson naming conventions in Scandinavia but would amuse Westerners if he worked in law enforcement and could be known as Sheriff Sherif Sherif, a bit like the Major Major Major Major character in Catch-22. The madness of the Joseph Heller novel came to mind this week in Madrid, where Sherif Sherif was speaking on a panel at FYUZ, a rebranded TIP Summit (TIP being the Facebook-conceived Telecom Infra Project) that also featured the O-RAN Alliance in a signal they are good co-pilots and not wrestling over the controls of the plane, as once seemed likely.

It had the atmosphere of a celebration or festival, this year's event, with more foods of the world being circulated around the exhibition stands than you would see at London's Portobello Road market on the weekend. Unlike at most trade shows, those stands were all built from the same cheap wood (see photo). Points to the organizers for their marketing metaphors. You can essentially have as many different flavor combinations as you like – all consumed in the same general-purpose hardware environment.

But what was there to celebrate? For all the fuss about America's Dish Network and Japan's Rakuten and a degree of Oscars-like backslapping on stage at FYUZ, open RAN has barely impacted the sector. Nor have TIP's various other initiatives brought the revolution that was promised.

The big equipment vendors are still Ericsson, Nokia and – like it or not – Huawei. The big telcos in the US and Japan are still AT&T and NTT Docomo. Two-and-a-half years since launch, Rakuten cannot even muster more than 5 million customers (Docomo has more than 80 million). Europe's biggest operator, Deutsche Telekom, runs absolutely zero network functions in the public cloud, it recently pointed out to Light Reading.

Early days? Well, it's now six years since TIP arrived and four years since the founding of the O-RAN Alliance. In technology, empires rise and fall in a shorter period. Facebook reported annual revenues of $17.9 billion back in early 2016. Last year, they were $118 billion. Open RAN is arguably not doing what it set out to accomplish. So far, its main winners have been other big technology companies – Samsung, Intel, Dell, and even Rakuten blowing its vendor trumpet – rather than the small and midsized specialists it was supposed to cultivate.

And everyone, it seems, now wants to have an "end-to-end" portfolio – in other words, to be just like Ericsson. Open interfaces might enable operators to swap bits of their networks more easily. But it is unclear how the market supports numerous Ericsson wannabes when some of its big kit vendors have struggled on profitability in less competitive times.

Systems integration has emerged as the most intractable problem. Any ideas that open RAN interfaces will allow a telco to whip out Huawei's radios and plug in Samsung's in the time it takes to change a lightbulb are "unrealistic," according to Yago Tenorio, Vodafone's network architecture director and TIP's chairman.

Both the organizations he works for are trying to help with the mixing-ingredients job, partly through a Vodafone partnership with NTT Docomo. But the temptation for smaller operators will surely be to stick with a single vendor for most products. That, after all, is what Vodafone seems to be doing with Samsung in the UK. Tenorio, meanwhile, frets that systems integrators could become another source of "lock-in." Yet NTT Docomo sees itself in precisely this role.

The most encouraging area is probably chips – the kind that power networks, not the ones you douse with ketchup (or mayo, if you're Dutch). US merchant silicon seems to be flooding the industry (check out the glut now developing in the broader market), and it is increasingly advanced. In a way, that's not surprising – Nokia's silicon expertise comes partly from US semiconductor firms, including Broadcom, Intel and Marvell. Its secret sauce is a sprinkling of intellectual property on top.

But there is known telco doubt that Nokia adds much apart from baseband software and systems integration expertise. Is Ericsson, which plows a good chunk of its $3.8 billion annual R&D budget into its Ericsson Silicon unit while remaining tight-lipped about suppliers, all that different?

"We think the performance of the resulting system combining x86 with acceleration is going to be on a par with or beyond the performance of traditional architecture less than two years from now," said Tenorio on stage at FYUZ. Right or wrong, this would further tilt the semiconductor balance of power away from Europe and towards the US, weakening Ericsson and Nokia as chip developers.

Europeans worried about the atrophying muscle of their technology sector would have another reason to worry. One of open RAN's accomplishments, it seems, could be to strengthen US companies with a combined market capitalization of about $878 billion (see chart) at the expense of two European firms worth roughly $43 billion.

Market caps of US chip firms vs European network vendors ($B) 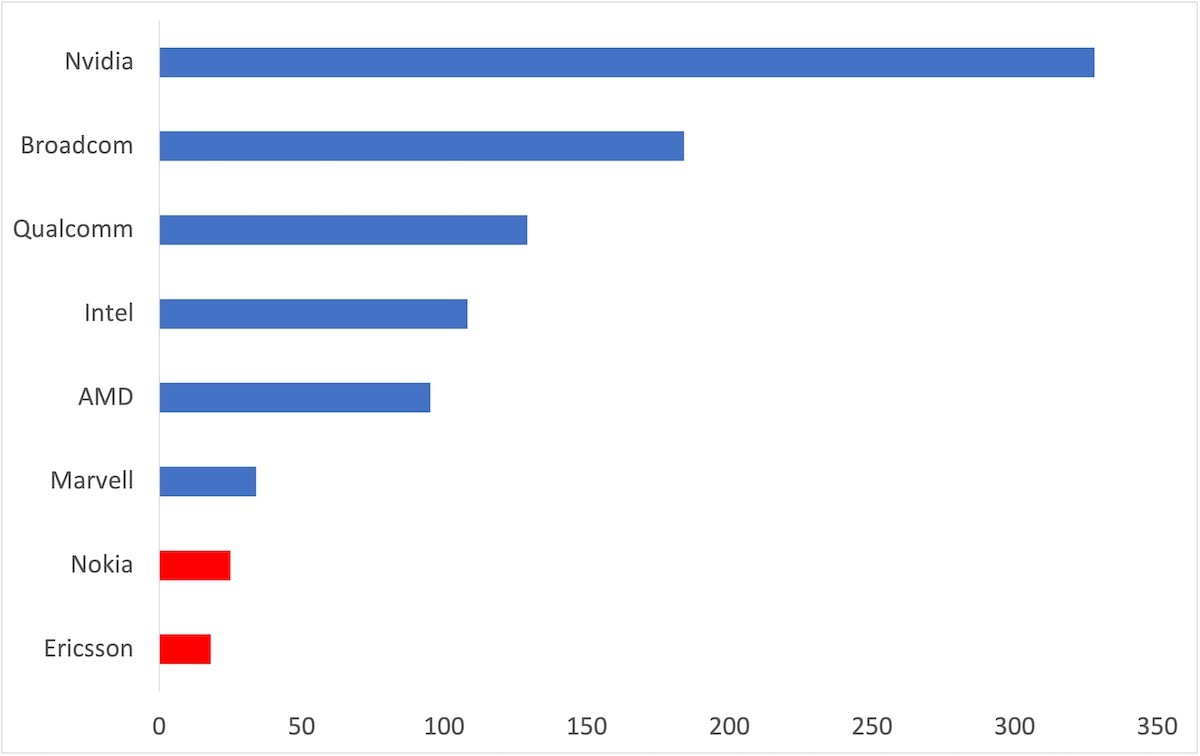 Showing its Facebook colors, FYUZ ended with a day dedicated to the metaverse, by when Light Reading had jetted home. But it's a good metaphor for the telecom sector's detachment from reality. You might as well dedicate a day to Uber, another application that needs support on telco networks but does not enrich telcos.

It appears to have escaped telcos that not a single imagining of the metaverse in fiction has been positive. That goes for the anarchic world depicted by Neal Stephenson, who invented the word metaverse in his novel Snow Crash, right through to the equally dystopian vision of William Gibson in The Peripheral (currently an intriguing series on Amazon Prime).

The concept's appropriation by Facebook (renaming itself Meta) makes the telecom sector's metaverse envy even more perplexing, like someone being jealous of ugliness. Facebook is not only now the likeliest of the tech giants to fall but also still led by Mark Zuckerberg, currently in a run-off against Elon Musk (Twitter's new owner) for the title of the world's most sinister tech mogul. And despite the gazillions Facebook is spending on it, nobody is interested. Except for the telcos, that is, who will have to pay for it, according to Dan Rabinovitsj, the vice president of Facebook Connectivity.

After complaining in a blog earlier this year that the metaverse needs "significant advancements in network latency, symmetrical bandwidth and overall speed of networks," he turned up to a late-Wednesday panel session at FYUZ to hammer home the message. Support appears to have come from Tareq Amin, the high-profile CEO of Rakuten's telecom ventures (Mobile and Symphony), keen to advertise an advanced, edge-tastic network that most telcos don't have. For the majority, the metaverse will be like being the bride's father forking out for an expensive wedding where nobody has left you any cake.