Europe's telco giants love to sound off about the lack of regional investment in open RAN startups. Without it  argue Deutsche Telekom, Orange, Telecom Italia, Telefónica and Vodafone  a European ecosystem for the new-fangled technology could be stillborn, an experience authorities will know well after earlier fumbled attempts to seed local alternatives to US Big Tech.

"Higher levels of funding are needed to enable promising startups to reach scale more quickly and to fill gaps in the ecosystem, which will otherwise be filled by non-European companies," say the operators in their latest reprimand, issued as recently as November 2021. Funding should come from "multiple sources," including the public sector, they insist.

The argument would carry extra weight if the telcos, whose combined market value exceeded $200 billion on today's stock markets, were themselves generous investors in open RAN startups. Every one of the operators maintains a venture capital arm, and some manage assets worth hundreds of millions of dollars. Yet an examination of those portfolios shows the commitment to open RAN is negligible. 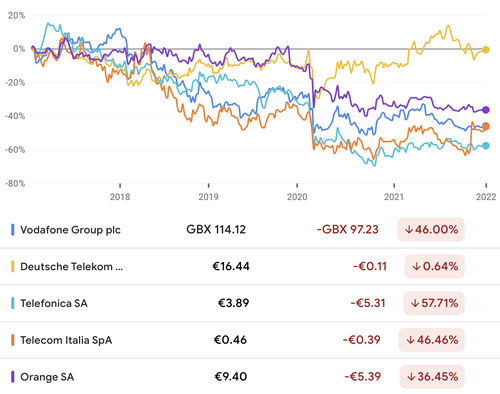 Of the dozens of companies listed on the operators' own websites, only one has an obvious connection to open RAN. Cellwize, the company in question, is an Israeli developer of network software that recently began touting a non-real-time RAN (radio access network) intelligent controller (RIC, for short), a component of future open RAN infrastructure that intrigues some operators. In 2018, it received an undisclosed amount of funding from Deutsche Telekom Capital Partners (DTCP). According to Crunchbase, Cellwize has received $56.5 million in total, spread across four investment rounds.

Lack of financial muscle is certainly not an excuse. DTCP, which appears to the be largest venture capital business owned by a European telco incumbent, manages assets worth about $1.7 billion and looks after a portfolio of more than 60 companies. Orange Ventures had about $350 million worth of assets under management, according to the French operator's annual report for 2020, which also claims it is "among the top 10 corporate venture capital funds in Europe."

Despite the many business and regulatory challenges they face, Europe's telco giants are also still profitable companies, generating almost $22 billion in combined net income for the 2020 fiscal year (ending in either December 2020 or March 2021). Throughout a pandemic that has made people dependent on broadband and mobile infrastructure, they have fared much better than many other companies.

That said, the five operators pleading for better regional support have combined net debts of around $280 billion, a figure that exceeds their market capitalization by 40%. They have pooled resources, spun off network assets and sold non-core ventures in efforts to improve their financial health.

Not all of them have been highly active investors, either. Telefónica Ventures has a portfolio of only 25 companies, far fewer than DTCP's, although the Spanish operator says it has made "indirect" investments in 120 startups. Through Telefónica Ventures and Wayra, a self-described "innovation hub" set up to support smaller companies, Telefónica provided funding of $12.9 million in 2020 to a total of 42 companies.

TIM Ventures, the investment arm of Telecom Italia, looks even smaller. Last year, it became an anchor investor in a venture capital fund named UV T-Growth, which claimed at the time to have received funding commitments for 100 million ($113 million) and to be targeting 180 million ($204 million) this year. But in its own annual report for 2020, Telecom Italia said its aim was to participate in the growth of just ten to 15 companies over the next five years.

As for Vodafone Ventures, it warrants not even a single mention in the UK-headquartered operator's last annual report. A filing with UK regulatory authorities reveals a net profit of just £11.4 million for the fiscal year ending in March 2020, when investments listed as non-current assets on the company's balance sheet came to £47.6 million ($64.4 million), up from about £15.8 million ($21.4 million) a year earlier.

The track record of these operators when it comes to investment in network companies is hardly outstanding. An exception is probably the case of Altiostar, an open RAN software developer that Telefónica previously backed before Japan's Rakuten took full ownership of the US company last year. Under Rakuten's wing, it has become one of several software specialists capable of landing major deals  and all while European operators bemoan the shortage of rivals that have European owners.

A somewhat depressing tale comes from Amarisoft. Employing only about a dozen people, the French company was singled out by Orange back in mid-2017 as one of four network startups it would support, potentially through funding. It was identified in the telcos' November report as one of only five European startups developing baseband software. And yet its relationship with Orange has fizzled out, CEO Franck Spinelli told Light Reading last year. "The telecom world is very slow moving," he said during an earlier conversation.

In March 2018, Deutsche Telekom followed Orange by offering support to three network startups. They included Airrays, an antenna company taken over by US chipmaker Xilinx a year later, and BISDN, a broadband virtualization specialist. The venture capital community "has been very hesitant to make infrastructure-related investments," said Arash Ashouriha, the German operator's senior vice president of group technology innovation, at the time. "We want to change this situation." Nearly four years later, not much is different.