Visitors to the German city of Neubrandenburg probably come for the gothic architecture, including one of Europe's best-preserved medieval city walls, but it now offers a glimpse of the future as well as the past.

Deutsche Telekom, Germany's biggest operator, has been using it for trials of open RAN (or O-RAN), the most voguish thing in radio since Hedy Lamarr. By 2023, it wants O-RAN to be a "commercial option," says Claudia Nemat, Deutsche Telekom's head of technology and innovation.

Why the interest? Addressing reporters by video conference days before Mobile World Congress (MWC), Nemat grumbled about the "lack of choice" in today's radio access networks. "The radio unit on top of the antenna pole and the baseband at the bottom have to come from the same vendor," she said. O-RAN is all about what Nemat champions as "disaggregation." 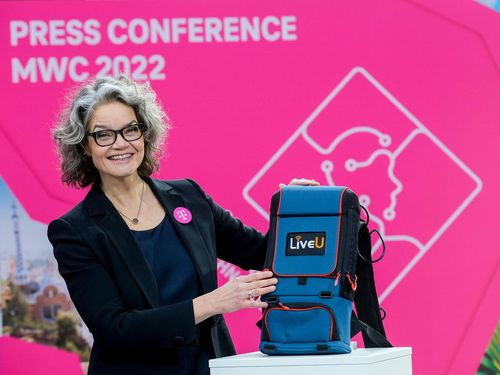 It has been slow going for Deutsche Telekom, though. The German telco first began talking about O-RAN Town, as it calls Neubrandenburg, in late 2020. It has been doing O-RAN lab trials since the beginning of that year.

In the meantime, its very traditional-looking 5G network  built by China's Huawei and Sweden's Ericsson  had been extended to 87.3% of German households by the end of September 2021. That does not seem to leave much room for O-RAN in Germany.

But Nemat denies O-RAN has missed its 5G opportunity. Deutsche Telekom has already issued a request for quotation (RFQ) to O-RAN vendors and is currently selecting partners for a commercial rollout next year, she told Light Reading.

NEC, a Japanese vendor of radio units (among other things), and Mavenir, a US developer of baseband software, were namechecked as O-RAN Town participants (and likely RFQ respondents). "It is a multivendor setup," promised Nemat.

The delay so far relates to certain "disadvantages" of O-RAN compared with traditional technology. And the key one seems to be energy efficiency.

Deutsche Telekom, along with most other big operators, is determined to reduce its carbon footprint and slash energy bills. O-RAN, unfortunately, "is less energy efficient than today's RAN technology," said Nemat.

While further details were not shared on Monday's call, the use of x86 general-purpose processors in virtualized, open RAN deployments seems responsible for this inefficiency.

"If you have an ASIC [application-specific integrated circuit] for baseband processing, it is always cheaper than using a general-purpose processor like an Intel processor," said Alex Choi, Deutsche Telekom's head of strategy and technology innovation, two years ago.

One option is to use ASICs and other chips as hardware accelerators for more efficient baseband processing. Companies including Marvell, Nvidia and Qualcomm all have products in development for sale as merchant silicon in open RAN deployments. Nemat, however, trumpets breakthroughs with Intel.

"We achieved a reduction of electricity consumption of around minus 30%," she said. "For us, that is a big step forward for commercial deployment."

The point of comparison is unclear and Nemat did not say how the reduction was achieved. She did refer to the use of "intelligent hardware features" during trials, suggesting accelerators  from either Intel or another company  were involved.

But another possibility is that Deutsche Telekom managed to offset the x86 performance costs in other areas.

This is exactly what the operator claimed to have done two years ago in lab trials that featured Intel, VMware and Cohere, a US software company that is making a name for itself in open RAN.

Thanks to Cohere's technology  run as an application sitting on a VMware software platform  Deutsche Telekom managed to boost radio performance, doubling throughput on its network, and reduce overall costs, said Choi at the time.

Even so, a commercial open RAN deployment involving companies like NEC and Mavenir is hard to imagine. Any widespread rollout of their technologies would mean swapping out equipment recently supplied by Ericsson or Huawei, unless Deutsche Telekom plans to run two parallel networks. Either option would be costly.

Far likelier is that a 2023 deployment will be very limited. Other operators including the UK's BT and France's Orange have talked about using open RAN initially for small cells  designed to provide a coverage boost in specific locations.

A private network for a factory is one possible example. Outside Germany, of course, there may be a bigger short-term opportunity in Deutsche Telekom markets where 5G has not been as widely deployed.

The update was part of Deutsche Telekom's usual slew of MWC press offerings, which this year came in advance of the show and featured news about 5G standalone technology, 5G network slicing (Deutsche Telekom is still one for banging the 5G gong) and artificial intelligence (AI).

Of all the doomsday scenarios envisaged for the latter, nobody had previously thought of one quite so horrifying as an AI-generated fusion of Beethoven's Moonlight Sonata and Robbie Williams' Angels.

A sneak preview of the Deutsche Telekom-sponsored crime against music showed the cheeky British pop star alongside orchestra, wearing one of those semi-constipated facial expressions singers adopt when they are trying to look overcome with emotion. If he were alive today, Beethoven would have been glad to be deaf.