Dish Network is accepting signups for its promised 5G network, marketing the offering under the "Project Gene5is" branding.

"A new 5G network built to release American innovation," Dish proclaims on its new signup site, which was first reported by Axios. "Help us democratize wireless access and create the 5G network of the future."

The site's patriotic phrasing doesn't come as much of a surprise. Dish executives have long touted the company's desire to primarily use American vendors for 5G (though both of Dish's radio vendors are based in Asia).

"We know we'll have a much more American-centric set of vendors than the traditional incumbents," Dish's Charlie Ergen told Light Reading in 2019.

Dish provided no other details on its "Project Gene5is" effort, though the site's privacy notice does mention "a new 5G wireless network (the 'Genesis Service')." 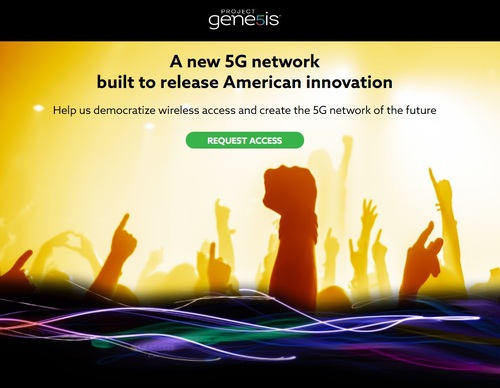 It's not clear whether "Project Gene5is" will be Dish's primary brand for its 5G network. The www.projectgenesis.com website directs visitors to a video game of that name. And "Project Genesis" has ties to the movie Star Trek II: The Wrath of Khan. In the 1982 flick, the Genesis Device is used to reorganize dead matter into habitable worlds and, eventually, resurrect Spock (spoilers).

The revelation of Dish's website comes just a few months before the company has promised to light up its network in Las Vegas. Dish is to cover 20% of the US population by June 2022 with 5G, and 70% by June 2023, under its 2019 agreement with the US Department of Justice. Dish has promised to sell the service to consumers as well as enterprise customers.

Indeed, Dish has been making a number of noteworthy hires as it works to flesh out its mobile network operation. The latest: Dish's national tower manager is hiring several full-time drone operators whose job will be to monitor the company's growing network of cell towers. Requirements include the ability to "fly drones on tower sites and ground scan various structure installations and rooftops in congested urban and city areas."