Deutsche Telekom cozies up to Nokia for open RAN

Germany's Deutsche Telekom has been fairly secretive about its plans for open RAN, a fashionable technology promising to boost competition and lower costs in the radio access network (RAN) market. It was a founding member of the O-RAN Alliance, the group developing open RAN specifications, and carried out lab trials earlier this year. But there has been a dearth of news from the German incumbent about open RAN in the field.

That changed this week when Deutsche Telekom hinted that Nokia could have a major role in its future rollout. "I am particularly pleased that with Nokia we have also been able to win a strong European partner for our co-operation in O-RAN," said Claudia Nemat, Deutsche Telekom's chief technology officer, in a statement published on the operator's website.

Co-operation in O-RAN does not mean Deutsche Telekom is about to launch into a rollout using the Finnish vendor's technology. It could simply refer to Nokia's participation in the O-RAN Alliance, alongside Deutsche Telekom and other service providers. Yet Sweden's Ericsson also sits in that organization and did not receive a mention in today's update. 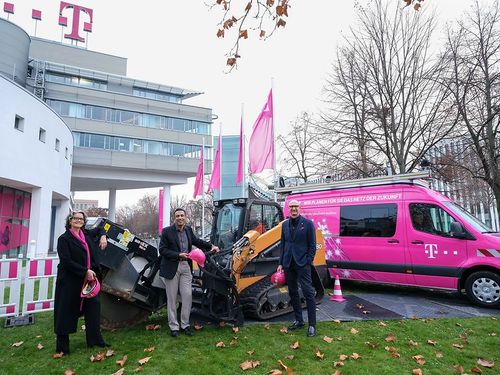 What's more, Deutsche Telekom has now revealed its intention to build an "O-RAN town" in Germany's Neubrandenburg next year. "This will be a small-scale commercial deployment, which will encompass up to 150 cells, and will bring open RAN into a real 4G/5G network environment," said a spokesperson for Deutsche Telekom by email. It is already in talks with potential suppliers, including Dell, Fujitsu, NEC and Mavenir. Nokia is also named on that list. It is the only one of the companies that qualifies as European.

Of the big three kit vendors  Ericsson, Huawei and Nokia  the Finnish company is by far the most enthusiastic about open RAN. It was an original member of the xRAN Forum, which merged with the China-led C-RAN Alliance to form the O-RAN Alliance in 2018, and this year began marketing a full set of O-RAN-compatible network products. Smaller rivals are skeptical about interoperability claims, arguing the proof will be in the deployment. But Nokia has gone much further than Ericsson or Huawei, which is not even a member of the O-RAN Alliance.

Curiously, Nokia also fell out of favor with Deutsche Telekom in 2017, when it was replaced by Ericsson as one of two major RAN suppliers in Germany (the other being Huawei). News of that swap came before Nokia owned up last year to problems with its 5G products. Among other things, the components it had chosen were too expensive, eroding margins and hurting its ability to compete. This year has brought signs of recovery and a fresh commitment to 5G research and development from Pekka Lundmark, Nokia's new CEO. "We will do whatever it takes," he told reporters in October.

In the meantime, Huawei has become an increasingly unpopular entity in Europe's telecom sector. Just today, Finland became the latest country to introduce legislation aimed at curbing the role of Chinese vendors. Vulnerable to trade retaliation by the Chinese, Germany has wavered on its own response. But operators are stripping Huawei out of the core, the sensitive control center of the network, and some politicians are pushing for a more comprehensive removal of its kit.

Deutsche Telekom CEO Timotheus Höttges has resisted more stringent rules as he continues to build his 5G network. Today's update revealed that the carrier has now deployed 45,000 5G antennas, mostly from Huawei, and provides service coverage to about two-thirds of the German population. Next year it aims to reach 80%.

Instead of ruling against Chinese firms, authorities should mandate the use of open RAN in telecom legislation, says Höttges. "The Telecommunications Act and the IT Act need to be amended in certain regards," he told reporters in August. "I think it would be good if these amendments also cover open RAN regulations for the access network. We need some statutory rules and they should be mandatory for all equipment providers." Right now, any such legislation would be an opportunity for Nokia and a threat to Huawei.

The glaring non sequitur is Deutsche Telekom's interest in diversifying the supplier market. Even today, the operator said "the diversity of equipment suppliers could be greater" when explaining its support for open RAN technology. The natural assumption would be that Deutsche Telekom looks to new companies as open RAN partners. Yet the one Nemat singles out is Nokia, a traditional supplier.

Feasibly, Deutsche Telekom could try to use radio units supplied by Nokia in conjunction with software developed by Mavenir. This would be a textbook use of open RAN, distinguishing it from a traditional deployment in which Nokia supplies everything. The Finnish vendor has experience, too. It already supplies "disaggregated" radio units to Rakuten, a Japanese operator, which is using them with software provided by Altiostar, a Rakuten-owned Mavenir rival. Neither Ericsson nor Huawei has demonstrated this ability or willingness to decouple hardware from software.

The RIC and the RAN

Nokia declined to comment on Deutsche Telekom's latest update. But Sandro Tavares, Nokia's head of mobile network marketing, says much of the current open RAN interest is in a feature called the RAN Intelligent Controller (RIC), which would support efforts by third-party developers to create new network applications for performance improvements. "Governments in the US, Latin America and Europe are looking to that as a possibility to develop a local 5G ecosystem," he told Light Reading earlier this week. "Smaller players could use APIs [application programming interfaces] as an entry point to develop apps that are interacting with the 5G network."

Intriguingly, trials that Deutsche Telekom publicized in February used a RIC developed by VMware, a US cloud-computing firm, for system improvements. Thanks to that tool, Deutsche Telekom was able to use a software application from Cohere Technologies, a Californian company, to boost radio performance.

Tavares thinks efforts to diversify the main RAN market are far more questionable. "There is so much to be done in terms of investment to develop a new baseband system, a new radio unit and so on. There are not a lot of companies out there that even with an open interface are going to be able to navigate this market," he said. Tavares also doubts open RAN will necessarily bring the massive savings that some of its supporters have promised. "This is not a market where the current vendors are really enjoying huge margins," he said.

However open RAN eventually shapes up within Deutsche Telekom, today's endorsement of Nokia is a clear marketing opportunity for the Finnish vendor and a potential worry for Ericsson and Huawei. For the broader open RAN community shouting about diversification, it is a headscratcher.