Opportunity knocks for open RAN hopefuls in the UK. They have been invited by the government to enter a competition offering cash prizes from a pot of £30 million ($41.3 million) for the best-performing contestants. Think of it as a Britain's Got Talent for open RAN, probably untelevized and without Simon Cowell as a judge.

It is the UK's latest attempt to help cultivate 5G alternatives to big kit vendors Ericsson and Nokia, which are set to be the country's dominant 5G infrastructure providers once operators have expunged all traces of China's Huawei  something the government has ordered them to do by 2028.

Authorities are promoting it as the Future RAN Competition (FRANC), possibly to avoid the charge they are favoring open RAN over integrated networks and picking a technology winner. Doing that would be like holding a smartphone competition that is not open to Apple. Unfortunately, they rather spoil that effort by later saying the whole purpose of FRANC is to "speed up the adoption of a new breed of wireless communication technology  Open Radio Access Network (Open RAN)" and thereby picking a technology winner. 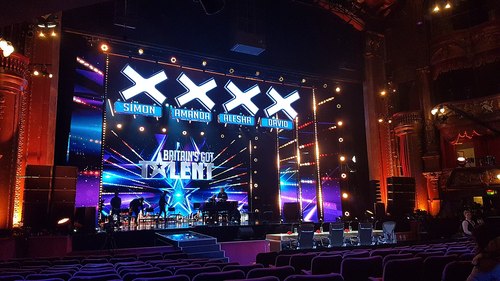 Where's Simon Cowell when you need him?

Unsurprisingly, it isn't open to any "high-risk vendors," which means neither Huawei nor ZTE (another Chinese vendor) can take part in it. They will not be too upset. A few million pounds is pocket change for companies that generate tens of billions in equipment revenues, and they would not have been able to sell their products in the UK anyway. Regulators look on them much as the Tour de France regards Lance Armstrong.

The doors are apparently open to Ericsson and Nokia, though. Whether they will enter is doubtful. Either would look outsized and incongruous, as if Abba had turned up to an X Factor audition. Rather like Huawei, they would not seriously benefit from the grant of just a few million pounds. Nor would they be especially welcome, judging by the pointed remark in the competition announcement about "the world's overreliance on a small number of telecoms vendors."

This is not an overtly protectionist move because the competition is open to foreigners, and not just UK firms. But entrants must have a UK presence to qualify for the receipt of public-sector funds. Since the UK's exit from the European Union, moreover, the government has taken a more interventionist approach to industrial policy than any government since the 1970s. Some politicians seem to think open RAN could restore a local supply chain that broke apart and crumbled when companies such as GEC, Plessey and STC disappeared off the stage last century.

So far, the signs are not encouraging. While open RAN is still a relative newcomer, the first deals in Europe and the UK have featured hardly any local performers. When it handed out its first open RAN contracts last month, Vodafone gave all the best parts to Asian and US vendors.

There are not even any local players involved in the government-funded SONIC lab, set up to help "accelerate the adoption of open RAN technology." SONIC launched last month, naming Accelleran, Mavenir, Radisys, Benetel, Phluido, Druid and Effnet as participants. A few of those are at least European, but none hails from Blighty.

If the UK really wants to have a local open RAN champion, it should probably look to Arm, a Cambridge-based firm whose chip blueprints are used for most of the world's smartphones. Right now, it is the only feasible architectural alternative to Intel's x86 platform, which currently dominates the market. Big operators such as Germany's Deutsche Telekom sound determined not to be solely reliant on Intel in future  a situation that would defeat the purpose of open RAN.

Yet authorities have never grasped Arm's importance. Under a previous government, it was sold to SoftBank after the Japanese company promised to maintain a Cambridge headquarters and made various other assurances. Now SoftBank wants to sell it to US-based Nvidia, one of Arm's licensees, to the horror of others. Any takeover would clearly threaten Arm's role as an independent licensor.

Regardless of that development, the danger of open RAN is that it substitutes a series of dependencies for reliance on a couple of giant kit vendors. So far, there seem to be limited options for each disaggregated element  Dell, HPE and Supermicro on the server side, for instance, or Altiostar, Mavenir and Parallel Wireless in software. The smallest companies lack the financial strength of Ericsson and Nokia. And in the absence of Arm-based alternatives, Intel rules over baseband. A vulnerability in any part of the chain could bring the whole system crashing down.