Airspan to go public with $166M in pursuit of open RAN, 5G

Airspan Networks announced it plans to become a public company again via a merger with a special purpose acquisition company (SPAC). The transaction will give Airspan roughly $166 million in net proceeds.

"This transaction is expected to help fund our growth plans and accelerate our vision of providing our customers with leading edge 5G networks. We are at the precipice of a significant capital-intensive upgrade as 5G deployments drive the future growth of existing mobile carriers, new market entrants, and private and enterprise buildouts that we believe will transform numerous industries," said Eric Stonestrom, president and CEO of Airspan, in a release.

Airspan has a long history of providing network software and hardware to mobile network operators. Some of its most noteworthy recent customers include Rakuten in Japan (Airspan provides the operator's 28GHz 5G radios) Sprint in the US (prior to T-Mobile's purchase of the operator, Airspan supplied Sprint's Magic Box signal booster) and Gogo in the US (the company is building a 5G network for in-flight Internet). Airspan also acquired fixed wireless hardware supplier, Mimosa, in 2018.

In total Airspan counts 1,000 customers  including the likes of Jio in India and Softbank in Japan  in over 100 countries worldwide. 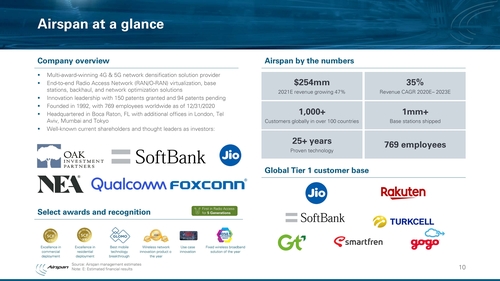 Airspan outlined its business in its new investor presentation. Click here for a larger version of this image.
(Source: Airspan)

A SPAC is an investment company that has no operations but raises money through an initial public offering (IPO) and then uses those proceeds to acquire another company. Doing so allows companies like Airspan to quickly raise money without the sometimes complicated process of conducting a standard IPO. Indeed, Airspan rival Mavenir recently delayed its own IPO due to "market volatility."

Airspan is merging with a SPAC called New Beginnings Acquisition Corp. (NBA), which completed a $116 million public offering in November. The firm's management team is composed of insurance and investing executives from the likes of Harbor Group Consulting and Norwegian Cruise Line Holdings.

As The Mobile Network reported, most of Airspan's funding will come from NBA, which will own 17% of the new company. Softbank and Dish Network also invested in Airspan. Other owners will include Airspan's existing shareholders, Qualcomm, Jio and Foxconn.

The transaction values Airspan at $822 million.

Airspan is to be listed on the NYSE under the ticker symbol "MIMO," likely a reference to the "Multiple-Input Multiple-Output" technology at the heart of many 5G radios. Airspan said it's uniquely positioned to take advantage of the 5G and open RAN markets due to its investments into both hardware and software. The company said it plans to sell its products to mobile network operators, cable operators, enterprises and others investing in networking equipment. 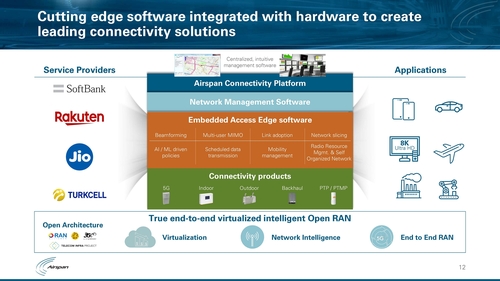 Airspan outlined its opportunities in its new investor presentation. Click here for a larger version of this image.
(Source: Airspan)