Europe's giant telcos are among the world's most enthusiastic when it comes to open RAN, a fledgling initiative that is supposedly about escaping the tyranny of the single-vendor radio access network and turning it into a jamboree of convivial suppliers. Yet the region is short of open RAN specialists. When Vodafone UK announced its first open RAN partners last week, they nearly all hailed from Asia and the US.

Accelleran is among a small crop of startups that might inject some European flavor into the future. Based in Antwerp, the software company employs about 40 people today and is emerging from stealth mode with its launch of new open RAN products this week. It has already been name-checked by Arm, the UK-based (although SoftBank-owned) chips designer, as well as Benetel, an Irish maker of radio units that works with Analog Devices and Marvell. That alone makes it interesting.

So what does Accelleran actually do? Not, it would seem, the software for the so-called "Layer 1" baseband processing that captures so much of the open RAN attention. For that, the most high-profile options today are as American as the Big Mac. They include Altiostar, Mavenir and Parallel Wireless, firms Accelleran CEO Frederic Van Durme sees as potential partners on future deployments. Vodafone, intriguingly, has picked South Korea's Samsung for this job in the UK, despite running earlier trials with Mavenir.

Where Accelleran would slot in is higher up the stack. Its own containerized, dRAX-branded software sits partly in the central units, where it would look after some of the functionality associated with the control plane, the bit that makes decisions about routing and resource management. The latest update means Accelleran can offer support for a 5G standalone deployment, besides a 4G rollout. But Accelleran has also developed its own service management and orchestration product as well as a RAN intelligent controller (RIC), an open RAN feature that excites some operators. 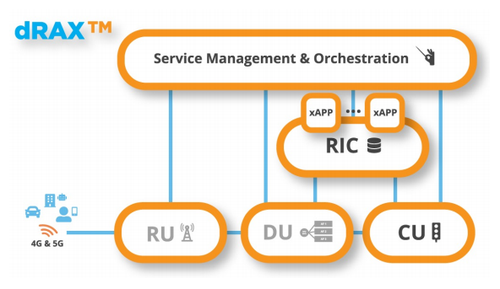 The RIC would essentially provide access to network data in real time for the development of new network-based applications, what Accelleran and others in the industry call xApps. Available to third parties, it could even be thought of as a kind of "app store of the RAN," says Van Durme. One app his firm has already helped develop is intended for use with autonomous vehicles and would make the handover of signals more predictable than it usually is on the public mobile network.

Technology executives within telcos seem to crave this RIC feature. "It will enhance overall network performance and capacity," said Arnaud Vamparys, the senior vice president of radio networks for France's Orange, during an interview with Light Reading at the start of the year. "It enables us to plug different scripts and third-party apps into the RAN controller in a modular way."

As convivial as they come

Openness and interoperability sound like an even bigger deal for Van Durme than they do for other open RAN players. That is perhaps not surprising. As a small firm focused on very specific areas, Accelleran needs to ensure it can mix happily with other suppliers. While Altiostar, Mavenir, Parallel Wireless and even Samsung have all built their baseband software on Intel's FlexRAN platform, tying them for now to x86 architecture in the distributed unit, Van Durme wants to be as independent as possible in the central unit. "We believe that above the distributed unit, we need to have data servers running Intel, Arm, any technology," he says.

He has worked with both Intel and Arm on trials in the past. Collaboration with the US chips giant has come on projects to develop a universal CPE (customer premises equipment) for private network deployments. Even more interesting was a RIC implementation that Accelleran did on Arm architecture running in the AWS cloud earlier this year.

If Accelleran is not competing in Layer 1 baseband processing, its focus areas do mean it is up against the technology provided by some huge companies, including the likes of Ericsson, Nokia and Samsung. Other rivals might include Wind River, a former Intel subsidiary that is in the orchestration game, and Dell-owned VMware, which is developing a RIC. Van Durme plays this down, preferring to regard VMware as a potential partner. But he also highlights Accelleran's telecom expertise  noting that its staff include former employees of Alcatel-Lucent (he was previously at Technicolor)  as an advantage over more traditional IT players.

"We still think we are very uniquely positioned because all the open RAN offers in the market are still end-to-end and we are differentiating with best-of-breed componentry," he says. "We are very focused coming from the RAN and we add cloud and network and virtualization experience, but you still need to know the essence of what the RAN does and the complexity of it, even from a radio unit and RF [radiofrequency] perspective."

His commitment to openness means Van Durme has taken a keen interest in the work of the O-RAN Alliance, the main open RAN specifications body. His own technologies are being developed in alignment with those specifications, he tells Light Reading, and in future that will mean any apps developed on top of Accelleran's RIC platform can be ported to another one, if that is what an operator desires. "That is a part of standardization that is important for users and network operators," he says.

A deal with a major telco would be a game changer for such a small company. Given the desire of European operators to cultivate local alternatives to Asian and US providers, it is not inconceivable as the open RAN becomes even more Lego-like in future. That, however, might give rise to a major systems integration challenge to snap all the different parts together. In the short term, the bigger opportunity for Accelleran could lie with organizations building their own private networks, especially in countries that have made spectrum available for this purpose. Wherever Accelleran might show up, its profile is definitely on the rise.