"Multivendor" almost sounds like molto bene, the Italian for "very well," when spoken by Enrique Blanco, the Spanish chief technology officer of Telefónica. But there is little to commend the status of virtualized telecom networks built by more than one supplier. Virtualization was supposed to be a bright spark that reinvigorates the telecom sector. Seven years after conception, it has become a juvenile delinquent that persistently offends.

The main problem is when operators are trying to build networks with multiple suppliers. Even if the operator sticks with a single vendor, an operator can expect its operating costs to rise with the introduction of virtualization before they eventually drop to about 91% of the original amount, according to China's Huawei. With a multivendor rollout, operating costs end up at 146% of the previous figure, it says.

A shorter "time to market" (TTM) is usually seen as the other direct benefit of virtualization. But even here there may be limited improvements if an operator is determined to use numerous suppliers. Average TTM ends up around six times greater on a multivendor than a single-supplier project, according to Huawei. That is a massive difference for telecom executives who believe their survival depends partly on how quickly they can move. 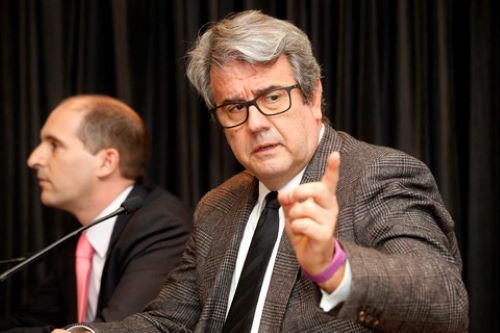 Telefónica's Blanco is determined to go multi-vendor despite concern about the expense.

This is a curious analysis by Huawei. On the one hand, its natural desire to be the only supplier in the mix gives it an incentive to paint multivendor projects in a bad light. On the other, Huawei needs to show willingness to operators that refuse to be knocked off the multivendor path.

Yet Telefónica's Blanco agrees that a multivendor rollout could be costly. "It is easier to do with a single vendor in a single core and it will be cheaper," he told attendees at this month's 5G Core Summit in Madrid.

Despite his reservations, Blanco has blackballed single-vendor entries as Telefónica invites interest from suppliers of 5G core network technologies. The main reason is that he does not want Telefónica to be overly reliant on one provider. Forthcoming 5G services could play a vital role in society, he said during a presentation in Madrid. Trusting everything to one supplier would hardly be wise.

The interest in multivendor networks is nothing new, of course. When virtualization first appeared, a big selling point was that it would supposedly give operators more freedom to combine software and hardware companies in their networks. The basic premise is to end the tight integration of hardware and software in telecom equipment. Ideally, an operator should be able to run any software vendor's code on common, off-the-shelf servers. Thanks to this "disaggregation," moving between different suppliers would become much easier, telcos hoped.

Recent developments are persuading executives that multivendor networks are a necessity. Years of consolidation, including Nokia's 2016 takeover of Alcatel-Lucent, have concentrated network power in the hands of a few giant vendors. None looks in the best of health. After retreating from some markets to focus on mobile, Ericsson now faces a $1 billion US fine for corruption and the risk of non-US probes into its past activities. Nokia is still racking up losses, according to International Financial Reporting Standards, and is monitoring its Chinese business amid signs of growing support for local vendors. Huawei is banned from acquiring US components and blocked from doing business with some Western operators.

But working with smaller companies has turned out to be no easy thing, forcing operators to do more work as they stitch a system together. Making matters worse is the push toward open source technology and microservices, lightweight alternatives to the somewhat clunky virtual machines that appeared in the first wave of virtualization. "There are more pieces you need to bring together," said Franz Seiser, the vice president of core network development for Germany's Deutsche Telekom, at the Madrid show. "The whole philosophy has not been designed to make it easier to run the system. The opposite is the case. That is the price you pay."

This integration headache partly explains why costs may rise. Some operators are turning the job over to professional systems integrators such as India's Tech Mahindra, which is notably supporting ecommerce giant Rakuten with the deployment of a new virtualized and multivendor mobile network in Japan. But the use of these specialists means there is another bill to pay. Making do without them puts more pressure on the in-house operations team. And when something goes wrong in a multivendor network, identifying the responsible party might not be straightforward. There is no longer just "one throat to choke," say operators.

Next page: The benefits and risks of monogamy