Of all the telco virtualization projects underway, Telefónica's Unica initiative is arguably the most ambitious. Even after the sale of some assets, the Spanish operator's business empire spans countries in Latin America and Europe that have little in common. Developing the virtual tools that can be used across these networks, and the processes that support them, was never going to be straightforward. (See Telefónica Upbeat Despite Slump in Profits and Telefónica Unveils Aggressive NFV Plans.)

The overhaul is taking longer than anyone had originally imagined, largely because of technology immaturity. Right now, Telefónica is focused on virtualizing its core network functions, and it will be some time before it can turn its attention to the radio access network (RAN), executives admit. But the goal remains the same: to build a more automated, software-based global network that will reduce costs, speed up service development and fuel innovation. (See Telefónica CTO: It's Time for Unica Phase II.)

Watch Out, Blanco's About 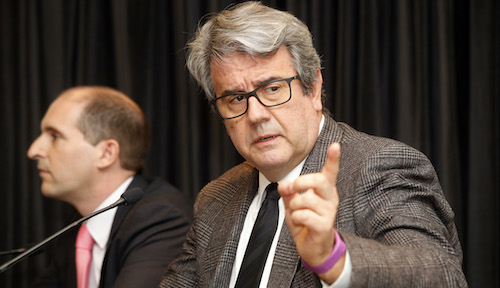 Much like Germany's Deutsche Telekom AG (NYSE: DT), which is virtualizing networks across most of its European markets under its pan-net initiative, Telefónica has recently shied away from brandishing any firm targets for the transformation. It has already hit some important milestones, however, and is getting ready for some big Unica moves. (See DT's Pan-Net Still at Start of the Marathon.)

Those will include the opening of new data centers in the markets of Chile, Mexico, Spain and the UK. Mexico is first on the list, says Javier Gavilan, Telefónica's planning and technology director, and will probably get a new facility this year. That will complement the Unica points of presence that Telefónica already maintains in Argentina, Colombia, Germany and Peru, he says.

Those VNF suppliers represent some of the world's biggest equipment vendors. China's Huawei Technologies Co. Ltd. is supplying virtualized evolved packet core technology in Argentina and Peru, for example, while ZTE is contributing a virtualized IMS (Internet Protocol multimedia subsystem) in Peru. Finland's Nokia Corp. (NYSE: NOK), meanwhile, was revealed last November to be supporting a virtualized service router for Unica, and Telefónica's Colombian subsidiary is using a virtual IMS from Ericsson. But the Spanish telco is not stopping there: More than 50 VNFs from over 30 different vendors are currently "under validation," it says. "Next year we have a clear roadmap to deploy more VNFs," says Gavilan. (See Telefónica Hands Huawei a Key Virtualization Deal and ZTE Scores NFV Deal at Telefónica.)

The immediate aim is to ensure that virtualized networks can support new customer demands. In practice, that means that Telefónica's goal is to have VNFs handling 20% of mobile user plane traffic and 50% of control plane traffic in the "short term" (it will not say by when exactly). "At the moment we are focused on the control plane and the data plane in the main data centers but we will distribute Unica across the OBs [operational businesses]," says Gavilan. "In the case of Colombia, we have virtualized two central offices  the objective is to move step by step toward the edge of the network."

Next page: Next steps

ChiefMar76368 8/4/2017 | 5:20:03 AM
Is the End in Sight? Great writeup, Iain. Seems like good progress to report in multiple areas across the group. Do you get the sense that Telefonica can see precisely what the end state really looks like, from an overall operational point of view? You point out the perception that Unica is network focused, how far along are Telefonica in mapping out the wider (minimal?) operational set of systems that will drive the new virtualized network? (Apart from the expectation that they will be able to retire 80% of today's OSS).

Seriously though there are plenty of third party VNF validation services out there such as EANTC and Wipro, to name just two. The big vendors (Cisco, HPE, etc) also offer these services though clearly they can't claim to be entirely independent arbiters. That creates an opportunity for the test and measurement brigade such as Spirent. The OpenStack vendors are also in this game too eg Canonical.