Netflix's international subscriber base surpassed its US tally in 2017, and the streaming giant continues to build up a massive global business. However, a big challenge ahead for Netflix is not just about keeping its international subscriber growth stoked, but also closing the average revenue per user (ARPU) gap with its US streaming business, a top industry analyst says.

A sizable and widening chasm between Netflix's domestic and international ARPU could threaten the global valuation of the subscription VoD company, MoffettNathanson Analyst Michael Nathanson concluded in a report that put Netflix's critical global operations under the microscope.

"Over the last year, there has been a widening gap between domestic and international APRU due to the advent of more aggressive pricing in the US offset by a wide range of factors in the international markets," he wrote. 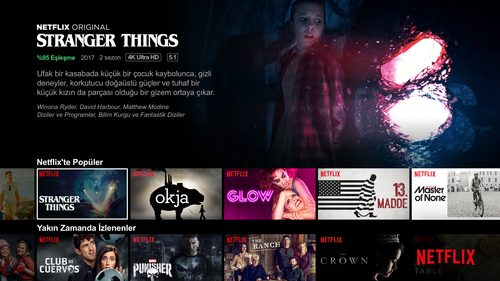 At $4.02, Netflix's ARPU in Turkey is the lowest among all countries studied by MoffettNathanson for this report. Pictured is a Turkish version of the Netflix UI.

The size of that gap is important because the international market is now central to Netflix's subscriber growth story -- in Q1 2019, Netflix added 9.6 million paid streaming subs, with just 1.74 million of that total coming from the US. Netflix ended Q1 with 148.86 million streaming subs, with 88.63 million of them from international markets. Global ARPU dropped 2% in Q1 versus the prior year period due to "currency headwinds," but improved 3% year-over-year when the effects of foreign exchange were excluded, Netflix said in April.

Netflix doesn't break out revenues by individual international markets or identify the foreign exchange impact by key region. To get a clearer picture, MoffettNathanson used a VPN to track Netflix's retail pricing strategies in 187 countries where Netflix has a presence and assumed that half of Netflix subs take its basic plan, while 40% take its standard plan, and 10% take its premium offering.

Following conversion to US dollars, about 92% of those international markets have an average ARPU of over $9, with 53% having an ARPU between $9 and $10, the study found.

As Netflix pursues lower-ARPU markets to maintain subscriber growth levels, the gap between domestic and international ARPU will only widen further, Nathanson predicted.

"While these concerns may not matter today, they should matter to investors using a ten (or more) year DCF [discounted cash flow] to value this stock," he wrote.

Per Nathanson's analysis, the market currently values Netflix's international business at $114 billion, or about 1.7x more than a "blue sky" domestic case valuation of $66.5 billion.

"Given the widening gap in APRU trajectories, we would argue this premium is simply too big for the non-U.S. markets, which offer lower unit economics due to greater regionalization of content spend," Nathanson concluded.