Where Does Comcast Really Stand on Paid Prioritization?

Internet service providers have kicked off a storm of criticism by lobbying for the repeal of the 2015 Open Internet Order. However, many ISPs contend that they're not against net neutrality principles; only the right of government to regulate their business under Title II of the Communications Act.

Even that net neutrality commitment has come under fire, however, with Comcast Corp. (Nasdaq: CMCSA, CMCSK) becoming the target this week of several journalists reporting that the company has backed away from a promise to forego all paid prioritization practices. Paid prioritization is the idea that customers could pay an ISP more money to give their traffic preferential treatment over the traffic of others.

In 2017, Comcast's language has softened somewhat with the company stating, "We will not block, throttle, or discriminate against lawful content." Comcast has also promoted tweets that instead of reiterating the bright line rules of the Open Internet Order -- which say no blocking, no throttling and no paid prioritization -- say "We won't block. We won't throttle. We'll be transparent." 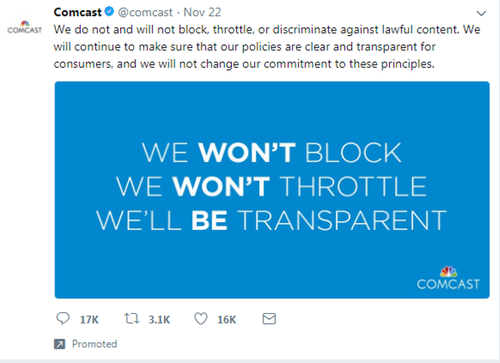 Importantly, a Comcast spokesperson this week has also gone on the record to address criticism by clarifying that "Comcast hasn't entered into any paid prioritization agreements. Period. And we have no plans to do so."

That statement is consistent with earlier declarations by the company, which also said in a filing with the Federal Communications Commission (FCC) in July that it supports "No anticompetitive paid prioritization."

So why the parsing of words? And why are other ISPs similarly trying to dance around the topic of paid prioritization?

Many opponents of the paid prioritization language argue that there may be reasons to prioritize some forms of traffic over others. Currently, the Open Internet Order negotiates that issue by defining some Internet services as Broadband Internet Access Services (BIAS services) and some as non-BIAS services. Non-BIAS services include things like dedicated business network access and also managed applications like voice-over-IP and managed IP streaming video delivery -- i.e. services that are provisioned separately from standard, mass-market consumer Internet access. However, the FCC hasn't delineated every service that might need or want separately-provisioned network support as non-BIAS. Not to mention, there are plenty of applications that don't exist yet today that might fall into this category. (Think future health services, real-time vehicle management, etc.)

The situation will only get more complicated with the arrival of 5G, as Light Reading Editor Dan Jones has pointed out. Network slicing is touted as one of the major benefits of the new wireless standard, and that will allow operators to provision access specifically according to the needs of different types of applications... or, theoretically, to the specifications of applications from different providers. (See How 5G Could Digitally Divide in a Post Net Neutrality World.)

The bottom line is that ISPs want to keep their options open because no one yet knows where the market will go.

Comcast has actually been one of the most outspoken of the large ISPs regarding its preference for avoiding paid prioritization deals. AT&T Inc. (NYSE: T) said in a blog post over the summer that, "We agree that no company should be allowed to block content or throttle the download speeds of content in a discriminatory manner." However, it made no such statement about paid prioritization.

The legal boundaries for paid prioritization, meanwhile, continue to shift. The FCC is set to vote next month to repeal the 2015 Open Internet Order, which will in theory give ISPs more flexibility to test out new network management policies. Yet, that decision will be fought in court, extending the uncertainty about what ISPs legally should and should not be allowed to do. (See Fed Watch: AT&T, Net Neutrality & More.)

It's not likely to get any easier in the near future.

kq4ym 12/11/2017 | 1:12:42 PM
Re: Yeah... It's only natural that most folks would publicy state policies that seem to be politically correct or at least toe the line of the corporate policy, thus companies can generally say object "only the right of government to regulate their business," while playing the line that they want to be fair to the consumers and customers, things will most likely change when rules change in their favor.
Reply | Post Message | MESSAGES LIST | START A BOARD

Without "net neutrality" regulations, the customer is paying one way or the other as operators do whatever they want to squeeze nickels AND potentially paying higher costs to video providers like Netflix -- who would have to cover higher costs potentially being surcharged to them for their high-bandwidth video content.

With Title II or other "net neutrality" regulations, the customer is paying higher costs to subsidize your neighborhood torrenting fiends on top of paying the operators' actual compliance/regulatory costs that are passed directly on to the customer as a matter of course. (Indeed, the FCC is completely funded by these fees instead of by tax dollars.)

I'm at peace with this fact that I'm going to get hosed somehow in some way. I'm way more concerned about privacy issues before the FCC and FTC than I am about net neutrality.
Reply | Post Message | MESSAGES LIST | START A BOARD

> In 2017, Comcast's language has softened somewhat with the company stating, "We will not block, throttle, or discriminate against lawful content." Comcast has also promoted tweets that instead of reiterating the bright line rules of the Open Internet Order -- which say no blocking, no throttling and no paid prioritization -- say "We won't block. We won't throttle. We'll be transparent."


It's a big part of my job to be completely distrustful of language. And I just don't see the "parsing" here. I think way to much is being read into this.

Moreover, "paid prioritization" is a term of art that may only be immediately understood by people who follow these issues closely.  "We will not block, throttle, or discriminate against lawful content" is basic and straightforward. It means what it says and says what it means. If I were doing Comcast's marketing, I wouldn't necessarily go out of my way to phrase tweets with "paid prioritization" either because it's essentially legalese.

Now, don't get me wrong. I'm not sure I necessarily believe what they're saying, but I don't think they're dancing around the topic with creative language. It seems pretty straightforward to me.
Reply | Post Message | MESSAGES LIST | START A BOARD

DataArch34459 11/30/2017 | 12:51:21 PM
More Hype than Fact How does Comcast get blamed for owning or having control over the whole Internet? The connection could be traversing any number of IXCs or long haul carriers. Not to mention an oversubscribed content supplier's servers. And who is NOT using VPN these days? Then add in business customer SLA's, paid guaranteed bandwidth rate, and maximum burst rate capabilities. And then add in: ATM and MPLS QoS classifications = prioritizing one kind of traffic/connection over others. It's been around. It's still here.

Killing Net Neutrality means ISPs can oversubscribe their networks and then offer a premium upcharge for a higher QoS to anyone that complains.
Reply | Post Message | MESSAGES LIST | START A BOARD

So since streaming video doesn't require prioritiziation....example proof is the world we actually live in...., can we stop with the video provider can't deliver service argument?

KBode 11/29/2017 | 5:49:57 PM
Re: Who's paying? "I think up till now we all assumed that it would be content companies paying for prioritization, but with the bandwidth demands for applications that require low latency, such as AR/VR, high-end gaming, etc., I think there's no doubt that some end users would gladly pay to have downstream and upstream content prioritized. Does that count as "paid prioritization," or is that just serving the end customer?"

Net neutrality rules generally carve out large holes for prioritization of all stripes (medical services, etc.) The problem in "anti-competitive paid prioritization" is when deeper pocketed companies (say Comcast's NBC Universal) can afford to pay for priorization or lower latency and better routing than, say a small startup, non-profit, or educational institution.

That creates a market where you can buy yourself an unfair advantage, which is what folks are quite justly concerned with. With very little regulatory oversight and little last-mile competition, there's every indication a company like Comcast plans to take full advantage.
Reply | Post Message | MESSAGES LIST | START A BOARD

Anybody that doesn't think Comcast intends to take full anti-competitive advantage of apathetic regulators and limited competition is fooling themselves. Full stop.
Reply | Post Message | MESSAGES LIST | START A BOARD