WASHINGTON, D.C. -- The online day of action for net neutrality may have been lackluster compared to earlier online protests (although more than 100,000 websites, Internet users and organizations are said to have participated), but Democratic Congressmen were determined to rally support for open Internet rules at a press conference outside the Capitol building on Wednesday. 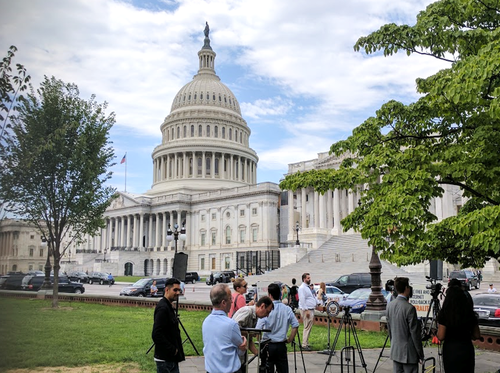 Net neutrality advocates prepare ahead of a press conference in the so-called "Senate Swamp."

Markey called the net neutrality protest "the beginning of an historic fight," and with his colleagues promised not to let up on efforts to keep Open Internet rules and the classification of ISPs as Title II common carriers intact. 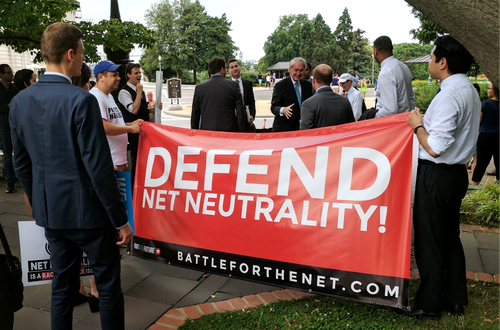 Senator Markey reaches out to shake a hand as the biggest banner of the day was unfurled.

Signs were a big part of the event. Some protesters went big (see above), while some were more creative in their efforts (see below). 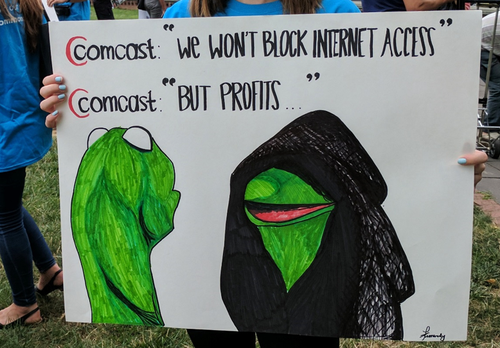 When Internet memes jump the gap into the real world.

There were several lively calls to action, with Senator Wyden pointing out that net neutrality advocates "are defending what we won once," a reference to the passage of the Open Internet Order in 2015. Numerous speakers also categorized the fight for net neutrality as a first amendment issue, and a major issue for small businesses. 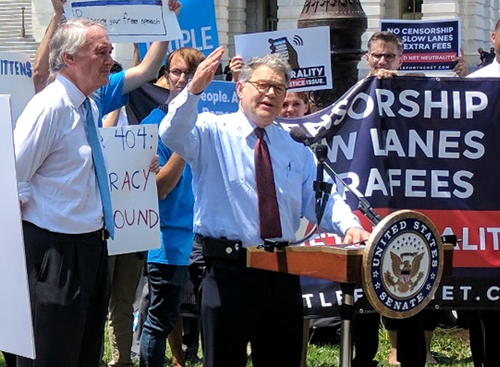 Taking the prize for enthusiasm, however, was Senator Franken, who revved up the crowd with both fiery language and effusive gesturing despite the hot Washington DC sun. Franken accused Internet service providers of falsely claiming that the Open Internet Order has put a chill on network investment saying that "couldn't be more untrue," and "It's so bogus, it's just insulting."

Next: No legislative solution

I am sorry that I believe a company that said it was dealing with its customer in a negative way over a scumbag politician.  Thinking and doing are two things.  Note the only NN violations that have been actually recognized were before the term was recognized and done by rural telcos not T1 carriers.

Innuendo aside....there is no cases of NN violation at a T1 carrier.  So implementation of Title II did nothing either positive or negative.  Removal of it will do the same.  Nothing.  Great way to stir up sentiment but do nothing.  Wish something would be done on say - Making Broadband a Universal Service.  Now that would actually cause people to spend money and take action.  Instead we get posturing over nothing.  A waste of time and that is the way that folks want it to work.

KBode 7/13/2017 | 11:35:51 AM
Re: Sadly... That Cogent narrative isn't really supported in the NY AG's lawsuit against Charter, where company executives were caught on e-mail talking about thinking about willfully degrading peering capacity to put an end to free interconnection and drive up costs.

Shenanigans that all just magically stopped after the FCC warned it would start paying closer attention and looking at the details.

Also, I wish I could be blissfully optimistic that the gutting of most consumer protections (TItle II, Privacy, net neutrality, etc.) will result in zero bad behavior by incumbent ISPs, but I think that's either naive or unjustifiably optimistic.
Reply | Post Message | MESSAGES LIST | START A BOARD

Nothing happened when Title II was implemented.  Nothing will happen if it is removed.  Remember, the Netflix - Comcast controversy was actually a Cogent issue that had nothing to do with Comcast.  Cogent said publicly that it lowered Netflix's priority because of the low value per bit to them.  And that was Netflix's vendor....