Will Messaging Market Leave Telecom Behind?

The founder of a leading enterprise messaging and chatbot company says telecom service providers still have an opportunity to grab some of the value in the messaging field, but only if they move more quickly and work harder to be open to developers.

Beerud Sheth, co-founder and CEO of Gupshup and a serial entrepreneur, is convinced that messaging is this decade's paradigm shift, following the personal computer, the web, and the smartphone as the primary platform, with bots being a significant tool to enable that.

To back up his argument, Sheth points to messaging as the primary use today for smartphone communications -- far exceeding voice calls -- and the rise of WhatsApp, Facebook Messenger and more.

His company's bot and messaging platform today is used by 30,000 businesses and handles 4 billion messages per month. In addition to its bot builder platform, launched a year ago, Gupshup this year unveiled its Interbot tool, which lets bots speak to each other. The company was one of the first to partner with Google on its Actions on Google platform, and its bot builder can make bots for more than 20 different platforms, including Alexa, Facebook Messenger, Skype and WeChat. 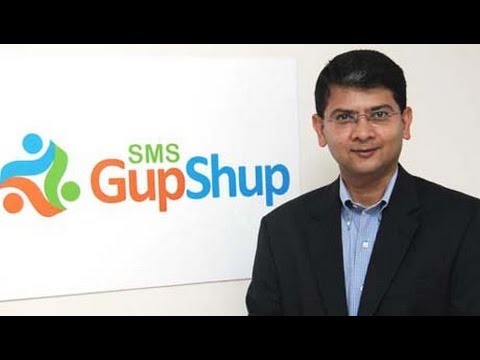 But Gupshup started as an India-based SMS specialist and, as a result, Sheth has experience partnering with mobile operators -- mostly in Asia -- in the messaging world. His message to them is pretty straightforward: get moving on Rich Communications Services (RCS) or watch others take control of the market, much like Apple and others once did with smartphones and apps.

Telecom did a great job of democratizing communications, Sheth says, but when it comes to the layers above that, he thinks "it has been a series of missteps and missed opportunities."

"In the early days, they controlled the whole ecosystem, right?" he comments in an interview. "Of course, they provided connectivity, but they controlled the device, and what was called value-added services, like ringtones and wallpapers. They ran it in an overly controlled way, trying to keep it as a walled garden, a closed space, exercising way too much control. And they missed the opportunity, because look what happened."

By now it's a familiar story -- Apple swooped in with the iPhone and its app store, and the wireless operators and even device makers such as Nokia were marginalized. A platform that enabled developers anywhere to create mobile apps brought the innovation of thousands of companies to the marketplace, and Apple captured the value-added services market.

"Companies in Silicon Valley get the value of the power of an ecosystem," he comments. "And look at what is happening with value-added services. That was tightly controlled and, meanwhile, all these apps based on top of the smartphone, these OTT apps as they call it, took over all the use cases and completely decimated the value-added services industry. Nobody goes to any of those VAS anymore -- you use the browser you have, and do Facebook Messenger or WhatsApp."

Having lost control of devices and value-added services, mobile operators could follow the lead of some of their peers by owning content, but they can also get deeper into services, Sheth says.

"As it comes to messaging and bots, if they want to be actively engaged, the one last remaining play for them is this thing called RCS -- they do control SMS, and RCS is the next version of it," he comments. But that control has to be properly executed.

"There are many industries, like financial services or healthcare, where in most countries, the consumer data cannot leave jurisdiction of the country, it cannot travel over Facebook Messenger," Sheth notes. "So there is still a need for telco infrastructure, for RCS and so on."

But there are still two issues that he perceives. First, the telecom operators have to exercise "just enough control" of a fundamentally open ecosystem, Sheth says. And secondly, they need to move much faster.

"It has been really slow -- we have been talking about it for seven or eight years now and it's barely off the ground," he comments.

Mobile operators still own a ton of data, providing insights into customer needs and future service possibilities, "but they have to follow the value playbook and open up APIs so developers can self-serve."

Gupshup stands ready to collaborate and cooperate in the RCS space, Sheth says. To date, Google has been a driving force behind this message technology, partnering with carriers globally as well as with device manufacturers to incorporate RCS into Android phones, following its acquisition of Jibe Mobile. (See GSMA Adds Google, Operators to RCS Support Group, Will Google Save Mobile Operator RCS? and Google Acquires Jibe to Bring RCS to Android.)

The things that have slowed RCS to date -- business model challenges, interoperability, and the cost and complexity of deployment -- aren't going away, however. And it remains to be seen if telecom operators see messaging as the significant market Sheth is describing.

He firmly believes, especially with the rise of messaging apps and in-home assistants such as Google Home and Amazon.com's Alexa, that messaging in the broad sense is the way things will get done.

"With the wave of conversational interfaces coming in, the industry is saying, if this is what people like to do, then why not squeeze the whole Internet inside the messaging?" he comments. "So instead of going to the website, or downloading an app, what if you could just have a software program that could chat with you, right within the messaging app? You could talk to the Google store, the bank, the news site and it would be as simple as having a conversation with a friend. Anytime you are doing messaging, the metaphor is about conversation. Every business becomes a conversation -- every interaction becomes conversational."

And this is where bots come in -- as the volume of messaging scales up, bots are needed, particularly in the commercial context, to handle millions of messages.

The question is -- what role will telecom play in this new paradigm of messaging?

kq4ym 8/18/2017 | 11:07:50 AM
Re: Telco's challenge to OTT messaging If indeed we can come to a future where "you could just have a software program that could chat with you, right within the messaging app," that might be the way to go. But getting to that point might be harder than we imagine now. But, just imagine the benefits of doing most everything with a messaging app through chats.
Reply | Post Message | MESSAGES LIST | START A BOARD

scanlanavia 8/10/2017 | 6:13:19 AM
Re: Telco's challenge to OTT messaging Yes. I agree that Telcos indeed charge for MMS, despicable policy considering the free alternatives. To make matters worse the receiver of such MMS may have to login to an obscure portal to view the message. This is the practice of "V" yet in 2017. Another trick of Mr. Telco is converting a long SMS into an MMS unknownst to customer.. As a service MMS died as soon as it launched back in 2003-5. with it, Telcos should really have shut it down and refunded their customers for the shoddy effort. To be fair really 3GPP and its collaborators were responsible for the MMS fiasco. Could Volte go the same way? quite likely considering the free OTT voice and video alternatives....
Reply | Post Message | MESSAGES LIST | START A BOARD

GypsumFantastic 8/10/2017 | 5:15:27 AM
Re: Telco's challenge to OTT messaging And even now they still charge for MMS on a lot of plans even though the user can simply send the same message with attachment from the same device using OTT app.
Reply | Post Message | MESSAGES LIST | START A BOARD

Phil_Britt 8/9/2017 | 6:54:33 PM
Re: Telco's challenge to OTT messaging You're right that telcos tend to be slow to respond to this service, just as they are to other services and technology, Telcos have been stuck with "yesterday's thinking" for decades.
Reply | Post Message | MESSAGES LIST | START A BOARD

scanlanavia 8/9/2017 | 9:51:15 AM
Telco's challenge to OTT messaging The Telcos have had about 15 years by now to sort out their RCS service offerings with abject failure. I think Telcos were sort of hoping that OTT messaging will just disappear, while hugging on to the remainder if their dwindling SMS and ATP MMS revenues. No sympathy here for Telcos who think they can monetise everything...the new digital marketplace doesnt work like that it seems...right Mr. Telco?.. Had they offered free messaging from the outset rather than hideous charges Mr. Telco could still be the King today.....
Reply | Post Message | MESSAGES LIST | START A BOARD

Carol Wilson 8/8/2017 | 4:04:50 PM
Re: Interbot I think it's more like letting bots that are based on one platform talk to those based on another. So if you build your bot using the Microsoft Bot Framework and I build mine using Amazon Lex, they can talk to each other.

But maybe they're still just setting up meetings, I dunno.

James_B_Crawshaw 8/8/2017 | 3:59:04 PM
Interbot Interbot tool lets bots speak to each other? Sounds interesting. Have your bot talk to my bot and we'll set up a meeting.
Reply | Post Message | MESSAGES LIST | START A BOARD

alison diana 8/8/2017 | 3:49:55 PM
Messaging From a user's perspective you really want messaging apps that can communicate with other messaging apps, just as it doesn't matter whose phone 'line' you were on or whose wireless service you use. I do know that messaging apps are far more popular than texting with teens and outside the US, in part because text messaging is or was more expensive abroad. And teens like the ability to find their friends without that age-old 'what's your number' question.