Geopolitics have caught up with MTS in Ukraine. "We were not able to develop our ecosystem there because they are sensitive about companies from Russia developing finance or media," says Vyacheslav Nikolaev, the Russian operator's chief marketing officer, in explaining the rationale behind the recent $734 million sale of VF Ukraine, the largest MTS operating company outside the motherland.

"We see fintech and media as one of the most synergistic business lines to connect with telecom and that would be value accretive," he says. "That is why it was not very promising. At the same time, the Russian market is very profitable and promising and less competitive in terms of international players." 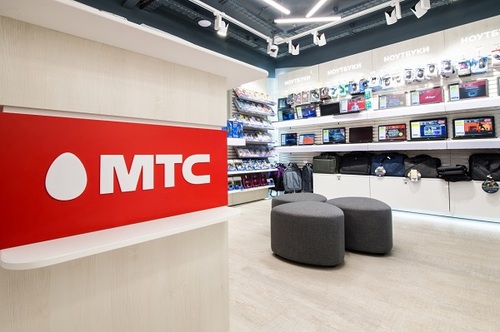 An MTS shop in Moscow.

The comments neatly sum up the latest strategic shift by MTS as it makes a bigger play for business outside its traditional connectivity space. The operator already generates a significant chunk of revenues from non-telecom services such as banking and retail. It hopes to boost their contribution through a more tailor-made approach, under which different combinations of products are proposed for specific clients.

Russia is fertile ground because MTS already operates the country's largest mobile network, with nearly 79 million customers, and is an increasingly well-known brand in other sectors. Its latest results show it has been extending a lead over chief Russian rivals MegaFon and VEON, a performance that Nikolaev attributes to pricing changes and service transparency. The relative weakness of US tech giants like Google and Facebook in the Russian market also leaves a bigger opportunity for MTS, he says. 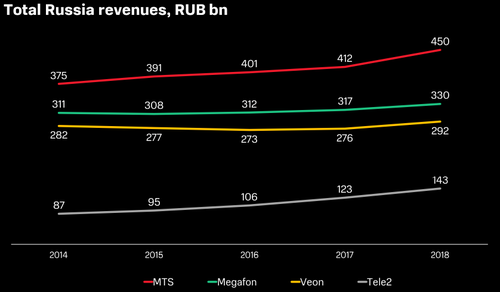 Success has come partly thanks to My MTS, an app that ranks higher than competitive offerings developed by MegaFon and VEON, even if it does fall behind WhatsApp and Instagram in the charts. With active monthly users up from around 16 million this time last year to around 20 million today, My MTS is popular enough for the operator to describe it as "Russia's leading mobile connectivity app." It is also a gateway to other MTS offerings.

In that respect, its importance looks set to grow. Under the new MTS strategy, banking, retail, entertainment and other services could feasibly be included in bundles, says Nikolaev, and pushed to My MTS users that have taken an interest in these features. The operator's banking service is already being integrated with My MTS, allowing customers to obtain a virtual credit card with just a few clicks or touches.

Such "convergence" offerings -- which have typically combined mobile, broadband and TV services in one bill -- previously led to concern that associated discounts would drain value out of the business, acknowledges Nikolaev. But MTS has been able to limit that impact, and is now witnessing growth in payments, thanks to careful management, he says. "This is actually a competitive advantage we have in that we are very experienced in preparing the right offer for clients, knowing what economics it will bring us and understanding the main things you will get after a few years."

MTS now has about 1 million convergence customers and the number is rising fast and helping to combat churn, he says.

The misfortunes of a big competitor have probably helped its growth in Russia. Last month, VEON said it had been forced to increase spending on Russian mobile networks after losing about 4.5 million customers between September 2017 and March this year. Unlimited tariff plans have had a "negative impact," said Alex Kazbegi, VEON's chief strategy officer, due to previous underinvestment.

VEON's own high-profile attempt to create an app for customers also ended in disappointment, sparking the resignation last year of CEO Jean Yves Charlier and prompting a strategic U-turn. "They tried to create a monster, a huge app that would do everything for the person and it doesn't work that way," says Nikolaev, in assessing what went wrong. My MTS, by contrast, provides a "view" of other services but does not try to integrate all their functionality.

MTS last week announced plans to spend between 15% and 20% of its capital expenditure on new products and business lines between 2020 and 2022, up from 13% last year, and it has promised to keep its telecom investments "steady" over this period. Might it quit other markets to double down on Russia? "In terms of geographic expansion, we are very opportunistic and will be," says Nikolaev. "There is nothing significant that is going to happen in the near future."

There remains plenty of skepticism that operators can thrive outside core connectivity markets. In Russia, the banking and systems integration businesses are the only non-telecom ones that make a meaningful contribution to MTS sales, according to the operator's last set of financial results, and neither of those was built from scratch.

But investors like what they have been hearing from the Russian operator. At 306.15 Russian rubles, its share price on December 2 was up 23% compared with this time last year. And the operator's outlook is for continued growth in sales and profits between now and 2022. If it can do that and demonstrate successes outside the connectivity space, it will belong in a very small club.

Notat1938 12/3/2019 | 7:30:27 AM
Re: Drywall Jacksonville Light Reading is proud to announce the finalists for this year's Leading Lights Awards program, also paper expert help you to get unique data for your writing task. And I think this announcement is very great to read and I love to participate.
Reply | Post Message | MESSAGES LIST | START A BOARD