At the turn of the millennium, the telecom industry lost any ability for rational thought and spent so much on new spectrum it could barely afford to build new networks. In the UK, where a 3G auction raised £22.5 billion ($29.1 billion, at today's exchange rate), the price per MHz per person (or per MHz pop) was measured in pounds. These days, authorities are lucky to see many pennies.

The UK is certainly not an outlier. Light Reading has aggregated and analyzed the results of the five auctions billed as 5G sales so far (according to the Global mobile Suppliers Association (GSA), an industry body), and found similar outcomes. In no country did spectrum in a single band raise more than $0.20 per MHz pop, and in some cases the figure was substantially less. While it remains early days for 5G auctions, these results should offer encouragement to an industry so badly scarred by its 3G experience it continues to worry about spectrum. (See Spanish 5G Auction Nets 438M for Govt.) 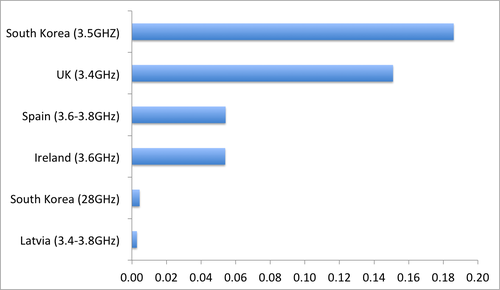 The devaluation that began with 4G, and has continued with 5G, is not unexpected. For a start, operators have sobered up since the pre-3G party, when they wrongly assumed mobile data services would generate billions of dollars in additional sales. These days, a new mobile technology is more about unexciting cost savings than the dazzle of new revenues. (See Let's Talk About 5G Efficiency, Not Wacky Services and Vodafone CTO: 5G Is Overhyped & It's Mainly About Cost.)

Spectrum issues and developments also explain why 5G spending is low. During the 4G auctions that happened several years ago, the lower frequency bands attracted the highest valuations. These airwaves are at a premium partly because they are in short supply. Another reason is that signals travel much further in these bands, meaning operators can blanket wide areas without so much network equipment. With 5G, most of the attention has been on much higher bands where spectrum is abundant and propagation relatively poor.

That is not to say there is a lack of demand. To support the very fastest services, operators will have to acquire as much higher-band spectrum as possible. Yet some, such as the UK's Three, already held valuable swathes of 3.4-3.8GHz spectrum. And others will be able to "re-farm" spectrum originally awarded for use with older networks. The looming shutdown of 3G, a disappointing technology, will free up airwaves that could eventually support 5G services. (See BT Aims to Switch Off 3G by 2022.)

The fog of mmWave
Nevertheless, there is still some uncertainty over the 28GHz and other so-called "millimeter wave" (or mmWave) bands, and a shortage of data to crunch. According to the GSA, South Korea is the sole country to have held a 28GHz auction, and it raised only about $554 million, or less than $0.005 per MHz pop. Amit Nagpal, a spectrum expert with Aetha Consulting, has previously downplayed the attractions of 28GHz spectrum. "The signals don't travel very far and don't go through objects, and so you will need an awful lot of basestations to cover a given area, for which the site rental costs and backhaul costs are very expensive," he told Light Reading during an interview last year. (See South Korea's 5G Auction Raises $3.3B and 5G Spectrum to Cost Less Than 4G, Says Expert.)

Results in South Korea would seem consistent with the view that lower frequencies are more valuable. Yet 28GHz has attracted particular interest in the US and parts of Asia as a "pioneer" 5G band that could support a range of high-speed applications. In the US, where there is currently a shortage of mid-band spectrum, a forthcoming 28GHz auction could prove more lucrative for authorities. (See FCC's Rosenworcel: US 'Falling Behind' on 5G.)

In Europe, some operators continue to fret about spectrum costs as if they had traveled back to 1999, with 3G on the horizon. Germany's Deutsche Telekom AG (NYSE: DT) has warned regulators that setting high "base prices" for spectrum will hinder network rollout. Telecom Italia (TIM) says a forthcoming 5G auction may force it to sell assets. Italy is reportedly looking to generate about 2.5 billion ($2.9 billion) from the sale of 5G licenses. (See Telecom Italia Says 5G Auction May Force It to Sell Assets.)

Anything that requires telcos to pay authorities or settle for smaller profits is bound to provoke grumbling. The warnings about 5G license fees are not dissimilar to the doomsday predictions about the end of roaming surcharges. Like South American footballers, operators cry foul in the hope of a better deal from referees.

But regulators must also learn from the negative experience of 3G. While that might seem obvious, some governments have done more to hype 5G than parts of the industry. Even if 5G does eventually give rise to new and economically important services, the telecom sector is unlikely to be the main beneficiary. By overcharging operators for license and spectrum usage fees, governments risk holding up the rollout of these services for the sake of a short-term fiscal boost.

To access a spreadsheet containing all of the 5G auction data examined for this story, click here.

iainmorris 8/7/2018 | 1:15:08 PM
Re: Spain calc is wrong Many thanks for the information. I've added a note in the spreadsheet about these expenses and re-uploaded so the new version is available to readers.
Reply | Post Message | MESSAGES LIST | START A BOARD