The FCC's chairman on Tuesday reiterated previous calls to open up high-band frequencies for 5G usage as soon as possible, while saying it will take several years to open up soon-to-be auctioned off 600MHz for mobile broadband usage.

Tom Wheeler spoke to the Subcommittee on Communications and Technology, United States House of Representatives in Washington, D.C. about 5G Tuesday. 5G is expected to offer data speeds up to 100 times faster than 4G, while supporting new classes of devices and types of applications.

"We're approaching 5G as we have with previous generations of wireless by adopting a flexible use policy and assuring that spectrum is available to be deployed when the private sector has arrived at the requisite technical standards and network architectures," Wheeler told the committee. (See 5G: As Close as You'll Get to a Jet Pack!)

In part, this will involve "eliminating barriers to wireless infrastructure deployment," the chairman said. He added that there is more work coming in that area but didn't elaborate in his statement.

The chairman also echoed Commissioner Rosenworcel's recent call to push ahead alone with "exploration" of 28GHz "milimeter band" spectrum as a potential 5G in the US, while stating that "international co-ordination is preferable." (See FCC's Rosenworcel Urges US to 'Go It Alone' With 28GHz for 5G.)

Finding the fastest ways to open up high-frequency bands for 5G is an understandable concern for Wheeler. It takes time to open up spectrum for commercial wireless use, even after the FCC has auctioned it off, or approved specific usage.

This is especially true in the case of the forthcoming 600MHz TV spectrum incentive auction, which is due to start next week with 104 companies and organizations approved to bid on the low-band radio wave, which will be reassigned from broadcast TV to mobile broadband usage. (See T-Mobile CEO: We'll be a 600MHz Auction Winner.)

After the auction is completed, which could take months to wrap up, the "transition will be a complex, multi-disciplinary effort that will span several years," Wheeler told the committee.


Existing fixed use LMDS licenses will be amended to enable mobile uses first.

For example, Verizon should have enough LMDS spectrum licenses to begin Korean-Style 5G services in East Coast, metro Texas, Washinton DC, and Florida via the XO acquisition. The big hole in this picture is West Coast and SF/Silicon Valley(What, no 5G in Sillicon Valley?), but this could be worked out via further acquisitions. 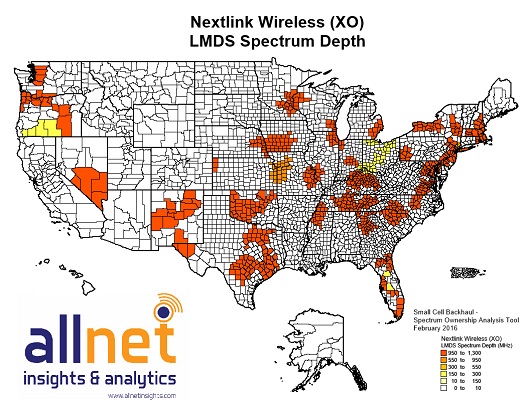 DanJones 3/24/2016 | 1:01:22 PM
Re: Millimeter timeline There are licenses out now for some short range fixed uses. For an auction? Well that could take years.
Reply | Post Message | MESSAGES LIST | START A BOARD