Things Are Getting Desperate in the 5G Small Cell Sector

"The significant increase in the volume of small cells being constructed is straining the response times from municipalities and utilities who are not complying with the FCC orders, resulting in longer construction timelines than we previously experienced," Crown Castle CEO Jay Brown announced during the company's quarterly conference call with analysts, according to a Seeking Alpha transcript of the event. "Due to the elongated construction timelines, we now expect to deploy approximately 10,000 small cells in 2019, which is at the low end of our prior expected range of 10,000 to 15,000."

Brown pegged the financial impact of the situation at $5 million.

What's important here is that Crown Castle is not alone. Other companies, including Verizon, ExteNet Systems and MasTec, also have recently pointed to bureaucratic red tape as a drag on their small cell deployment efforts.

And that's important because many see small cells as the only way to deploy super-fast 5G on high-band spectrum.

A slow-moving problem
Concerns over lengthy construction timelines for small cells aren't new. In fact, Sprint and its small cell vendor Mobilitie were fined $11.6 million for a program they started in 2014 to build small cells without waiting for the necessary permits from state and local governments. In 2017, Sprint's former CEO Marcelo Claure reiterated complaints that it takes a year to get a permit to build a small cell but just one hour to install it. 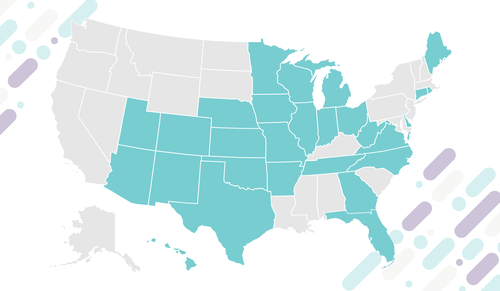 Further, the issue rose to the federal level last year when the FCC passed guidelines designed to require cities around the country to move more quickly on small cell installation applications. Those guidelines went into effect earlier this year.

Now, armed with both FCC guidelines and state legislation, small cell vendors are asking cities to expedite the small cell permitting process. Or else.

"We file a lawsuit if we have a solid right and we believe it's not being honored or respected in the administrative process with local governance," said Michael Shonafelt, a partner with law firm Newmeyer & Dillion. "If this republic is going to work properly, all levels and hierarchy of our republic need to respect each other. That means local government needs to respect state law and federal law."

Shonafelt, speaking in carefully measured statements peppered with legalese, explained that litigation is a last resort and is not designed to scare cities into speeding up the small cell permitting process. He said that each case -- for example Crown Castle's lawsuit against the City of Torrance, California -- is handled only on "fact-specific circumstances."

Nonetheless, some in the industry acknowledged that at least some slow-moving or uncooperative cities might want to start lawyering up.

"I think there has been an uptick recently [in lawsuits by small cell vendors against cities]," said Mike Hill, assistant general counsel for regulatory affairs for ExteNet, a small cell vendor that counts more than 30,000 small cells built or under construction. "I think that's entirely due to the application of the new FCC order as municipalities adapt to its terms."

However, like Shonafelt, ExteNet's Hill said that lawsuits are only a tool of last resort, and that ExteNet prefers to work with cities to iron out problems before calling in the lawyers. Further, he attributed the increase in the number of lawsuits on the topic -- such as ExtaNet's recent lawsuit against the Village of Lake Success in New York -- as simply due to the fact that there are more small cell requests than ever before.

"Even with the upward tick in litigation that you've seen, it's still by far the exception," Hill said of such lawsuits. He said that while the overall number of lawsuits might be on the increase, the ratio of lawsuits to small cell applications is likely declining.

Cities react
Perhaps not surprisingly, city officials around the country have been fretting about exactly how they're going to handle hundreds or even thousands of small cell construction requests. After all, each one requires an evaluation of that gadget's impact on the specific conditions and aesthetics of a particular location.

The FCC's small cell guidelines represent an "unprecedented federal intrusion into local (and state) government property rights that will have substantial and continuing adverse impacts on cities and their taxpayers, including reduced funding for essential local government services, and needlessly introduce increased risk of right-of-way and other public safety hazards," said U.S. Conference of Mayors CEO and Executive Director Tom Cochran last year.

Nonetheless, cities are working to adhere to the FCC's guidelines and state legislation. For example, officials in Grand Rapids, Minnesota, are working to stay on top of small cell permit applications while designing a more formal review process. The city has already processed dozens of applications, with more in the pipeline.

Similarly, the city of Denver recently updated its small cell design guidelines -- for example, the city now prohibits vendors from building new small cells within 250 feet of existing small cells, as well as small cells that "impede, obstruct, or hinder pedestrian or vehicular travel." Denver charges $1,500 for a permit for a group of up to ten poles, plus $200 annually per pole, alongside a $1,000 fee. The city plans to conduct an in-depth study later this year to get a better understanding of what it costs in labor to review each permit.

That's not a surprise; Denver is seeing a growing number of group small cell applications, starting with Verizons first application in January 2016 and continuing through to the middle of this year:

But perhaps San Jose offers the clearest look at what cities are really in for. San Jose is in a unique position because it signed public-private partnership deals with AT&T, Verizon and Sprint (through vendor Mobilitie) in 2018 for small cells. Those agreements paved the way for the operators to spend a combined $500 million to install up to 4,200 small cells across the city.

J. Guevara, San Jose's broadband manager, said the city has already approved 550 permits in the past ten months since the agreements went into effect. He said the city is now reviewing 70 to 75 small cell applications per week across all carriers.

"I am not aware of a jurisdiction operating with that effectiveness," he said.

But more importantly, Guevara said that handling all those applications is no small task. San Jose employs a dedicated team of 18 full-time technicians to manage its small cell review process, positions paid for through the public-private partnerships.

"That's really helped us to scale," he said.

Now, though, other cities around the country are legally obligated to potentially scale to similar numbers, albeit without the support of public-private partnerships.