Finnish equipment vendor Nokia claims to have more than doubled the number of unit shipments at its small cells business last year thanks to surging interest in Asia and North America, but admits that demand for the technology remains weak in Europe.

Nokia Corp. (NYSE: NOK) would not disclose details of actual unit shipments or revenues from small cell sales during a press briefing at its London offices, but insisted that it was seeing a "hockey stick" growth curve at the business.

"We are not on the vertical part of the hockey stick but we are not on the horizontal part either," said Randy Cox, Nokia's head of product management for small cells. "Without being able to share figures, we see that -- in terms of number of units shipped -- we more than doubled last year."

It's About So Big 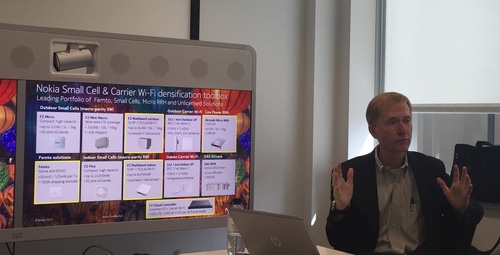 Randy Cox, the head of product management for Nokia's small cells business, shows off the vendor's kit during a press briefing in London.

The Finnish vendor also revealed it has now signed small cell deals with a total of 220 customers worldwide.

The publicity surrounding the technology was at fever pitch a few years ago, as proponents eyed opportunities to use small cells in "hotspots," such as concert venues and airports, where there was a need for a coverage and capacity boost.

A subsequent lull in activity provoked a degree of skepticism about the business case, but that is now changing, according to Nokia.

"Four years ago this was hype but now we are seeing it come to fruition," Cox told reporters, presenting details of small cell deployments in various parts of the world.

In particular, operators in North America and China, including Sprint Corp. (NYSE: S) and China Mobile Ltd. (NYSE: CHL), have been using small cells in a variety of scenarios as they "densify" their networks to meet the growing demand for mobile services.

"This is transitioning to everyday life," says Cox. "In China you have many cities with more than 1 million people and in specific areas demand is skyrocketing."

While China and North America are setting the pace, Nokia says it is also working with three operators in Japan and cites interest in the regions of Southeast Asia and Latin America.

It is due to start working on a deployment in Japan that will see "thousands" of units shipped this year, and says it has already shipped "tens of thousands" across the various countries in which it is active.

But Cox admits the appetite for small cells has been much weaker in Europe, and struggles to explain why. "It is perhaps partially because 3G is still more prominent than LTE but I'm hearing there is demand for 4G that is not being served today and I think there is a tendency for operators to feel that small cells are not the right answer or that it is too difficult," he says.

Some industry observers believe the emergence of 5G technology could spur small cell deployments, as much higher spectrum bands are brought into play (signals travel over much shorter distances in these frequencies), but Cox sounds dubious.

"If you are not doing small cells with 4G, I'm not sure why you would be thinking about doing it with 5G," he says. "You need to figure it out with 4G so that you can do it on 5G."

His colleague Stephane Daeuble, the head of small cells product marketing, is similarly frustrated by the situation in Europe.

"It is a missed opportunity," he says. "In China they are trying things out and have realized that if they put small cells in a certain environment there is an opportunity to ramp up volumes based on that."

During one deployment at Beijing airport, Nokia has been able to show that connectivity revenues increased as a result of the small cell installation, simply because of the "uplift" in network usage following rollout.

Even so, Cox is hopeful that a recent UK deal with Telefónica subsidiary O2 will kickstart deployments by other service providers.

Under that agreement, Nokia is deploying small cells in both outdoor and indoor scenarios. "That is promising and hopefully could be an example of where deployments will start to take off here as others see the benefits," says Cox.

"There is public money available in all European countries to improve coverage," says Daeuble. "In France some councils are saying they will deploy small cells -- there are close to 20,000 villages they have to cover by 2019."

Technical edge
Nokia acquired part of its small cell business with its takeover of rival Alcatel-Lucent in early 2016 and has subsequently had to "rationalize" its portfolio of products to avoid any overlap. (See Nokia, AlcaLu Steady Ship on Costs Before Tie-Up.)

With small cell development sites in China, India, Poland and the US (in Chicago), the company claims to have the technology edge over its competitors in this area thanks to the way it has approached the small cells opportunity.

"We took a top-down instead of a bottom-up approach and are using a very powerful chipset -- the same used in outdoor products," says Cox. "None of our competitors is doing that and the benefit is that we can reuse macro software."

Cox says many rivals came from a femtocell background and that software designed for macro networks cannot be used on "low-end, femto-type chipsets."

The Flexi Zone micro product, one of Nokia's flagship small cell devices, is capable of supporting as many as 840 users in a small cell while competing technologies typically handle just 32 or 64 users, says Nokia.

There also appears to be little concern about interoperability: In a number of cases, Nokia's small cells have been used in conjunction with macro networks from both Huawei Technologies Co. Ltd. and Ericsson AB (Nasdaq: ERIC), says Cox.