Small cells are growing in a big way in the US, but there's still a debate raging over whether they're actually a good business to be in. That's because the small cell business is both highly competitive and highly local.

Meaning, you could spend two years attending city council meetings in order to get the necessary permit to build a small cell in a particular location, and you could spend $35,000 getting the necessary equipment, power and backhaul installed at that site, only to have someone else swoop in and blow out your margins by building a competing small cell site across the street.

"Our high level conclusion is that while small cells are growing like weeds, expectations for their long term return potential should probably be tempered," wrote the analysts at Wall Street research firm MoffettNathanson in a lengthy report to investors on the topic.

Small cells are "a lot of work," acknowledged Chris Parra, VP of business development and strategy at Zayo, a major US fiber provider that was just bought by two investment firms in a deal worth $14.3 billion. While Zayo has been working to monetize its fiber lines by building small cells on top of them, the analysts at MoffettNathanson recently estimated that small cells only contribute around 1% of Zayo's consolidated revenue.

The 5G inflection
Small cells have been a topic of discussion in the wireless industry for roughly a decade now, but they've gotten a kick in the pants in the past few years as network operators struggle to keep pace with users' data demands. Basically, wireless network operators can improve network capacity by either adding more spectrum to their network or by increasing the number of cell sites they operate -- small cells fall into that latter category.

And by all accounts, US wireless network operators are embracing small cells. For example, trade group CTIA forecast that the small cells in the US will grow from around 86,000 in 2018 to over 800,000 by 2026. Indeed, in just the past few weeks Sprint confirmed it now counts 30,000 outdoor small cells, and T-Mobile said it counts 23,000 small cell or distributed antenna system sites, with plans to deploy 20,000 additional small cells through the remainder of this year.

Finally, the FCC expects up to 80% of new cell site deployments will be small cells. That's partly because small cells are an ideal way for operators to deploy 5G in millimeter-wave (mmWave) spectrum: Transmissions in mmWave spectrum can only travel a few hundred feet, due to the propagation characteristics of that band, and that's ideal for small cells because they can be as small as a pizza box and are often installed on so-called "street furniture" like light poles or streetlights.

However, small cells also need a power source and backhaul, preferably fiber as 5G can support speeds above 1 Gbit/s.

A tale of two tower companies
Crown Castle and American Tower are two of the biggest macro cell tower companies in the US, and they have diametrically opposed viewpoints on small cells.

"We are excited about the significant investments we are making to build new fiber assets as we pursue this expanding small cell opportunity," Crown Castle's Jay Brown said on the company's recent earnings conference call, according to a Seeking Alpha transcript of the event. He boasted that the company's 70,000 route miles of fiber are helping to power a small cell business that is on track to grow from 7,500 in 2018 to 15,000 in 2019. Zayo's Parra said the company only bids on small cell opportunities where it thinks it can make money. "The demand is definitely there," he said, explaining that all of the nation's major wireless network operators are deploying small cells, and that typical installations involve 20 to 25 small cells per square mile.

Eric Bozich is CenturyLink's senior director of wireless densification and in charge of the company's small cell buildout effort. He agreed that there's growing demand for small cells and said that CenturyLink generally deploys six to eight small cells in the area that would normally be covered by one macro cell site.

Zayo and CenturyLink, of course, are both leveraging their existing fiber networks to backhaul the small cells they build. However, Parra said the company still pays special attention to the "art of site acquisition." He said that means the company works carefully to make sure its small cell locations will be attractive to both wireless network operators and city officials. And he adds that, sometimes, it's actually cheaper for the company to build a separate small cell next to an existing one rather than putting network equipment for two operators on the same pole, mainly because of the additional power requirements for equipment for two operators instead of just one.

Zayo and CenturyLink are among the many fiber and cable providers hoping to cash in on selling backhaul services for small cells. The analysts at Wall Street research firm Cowen estimated that there will be 275,000 small cell nodes deployed by 2023, and if each generates $500 to $1,000 per month in revenue, then the overall small cell opportunity creates $20 billion in "value creation" for backhaul suppliers.

NIMBY
Unlike macro cell towers, which can often be built on the outskirts of town, small cells must be deployed right in the middle of the action. Moreover, it's easier for carriers to ink one big small cell deal with a city government rather than trying to negotiate individual deals with dozens or hundreds of building owners in a given city.

That's why the wireless industry is pushing on state officials to ink legislation that makes it quicker and easier for them to roll out small cells in different cities across the country -- whether local regulators and residents like it or not. Already more than 20 US states have signed small cell laws.

On the federal level, the FCC passed rules last year similarly aimed at speeding up the deployment of small cells.

So is that all helping the situation?

"It's not like things have dramatically changed," said CenturyLink's Bozich. He said federal and state rulings on the topic haven't necessarily trickled down to local zoning offices.

Another local hiccup that Zayo, CenturyLink and other small cell providers face is a question of aesthetics. "Every municipality has their own idea of what looks good and what doesn't," Bozich said.

That means some cities don't really care what a small cell installation physically looks like, while others want to make sure the deployments fit into a city's overall architecture and design. The issue has sparked a number of complaints at the federal level. 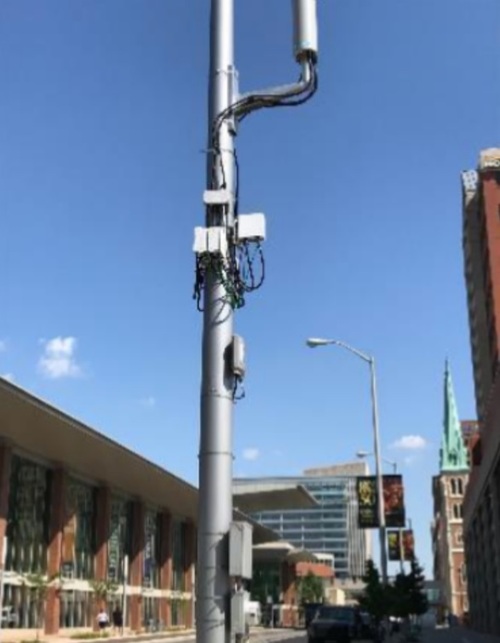 Some have complained about the aesthetics of small cell installations.
Source: Michael J. Marcus

Heavy Reading analyst Gabriel Brown noted that some particularly bulky small cell deployments can look a "bit like the Borg." But Zayo's Parra argued that "beauty is in the eye of the beholder." [Ed note: If you don't happen to be a Star Trek fan, here's an image of a Borg ship that represents the kind of techno-mess Brown is referring to.]

Nonetheless, the topic has generated its own little micro industry of small cell concealment companies like Raycap and ConcealFab.

A deep dive into New York City's small cells
Because the small cell business is -- by its very nature -- highly local, the analysts at MoffettNathanson conducted a detailed report on small cell deployments in a number of major US cities. MoffettNathanson tracked small cell installations across a number of major US cities.

The firm added that, in New York City specifically, companies have been working to deploy small cells for almost a decade. Therefore, small cell trends in NYC might hint at how deployments elsewhere could take shape. After crunching the numbers in NYC, "it turns out to be a far more complicated market than we had anticipated," the firm wrote.

MoffettNathanson reported that the number of small cell deployments in New York City caught fire in 2016, with Crown Castle, ExteNet, Mobilitie and ZenFi as the main players. That's not surprising considering most wireless network operators work with third parties on their network buildout efforts, although Verizon and AT&T do build some of their own small cell installations atop their fiber networks.

In NYC, MoffettNathanson found that Crown Castle enjoys a commanding lead in terms of small cell market share, and in recent years appears to have been able to score a second tenant on a number of its locations -- meaning, it built the site for one carrier but then was able to add equipment for a second carrier to the same site, thus increasing its revenues from that site.

However, more importantly, MoffettNathanson found that in recent years ExteNet, Mobilitie, and ZenFi have been building competing small cell sites next to Crown Castle's existing small cells in NYC.

"These vendors presumably did not find Crown Castle's first mover advantage daunting enough to deter them from building, nor were they scared off by having one less potential carrier as a tenant (the one on Crown Castle's system)," the firm wrote. "The carrier or carriers that opted to pass on using Crown Castle's system presumably did not find its time-to-market advantage or multi-year operating track record sufficiently compelling. Again, this isn't the end of the world (at least for Crown Castle -- with what appear to be two tenants it is likely generating an appealing return), but suggests the barriers to small cell overbuilds may be lower than common narratives suggest, and some vendors appear to be aggressive in their pursuit of new business."

However, the analysts at MoffettNathason warned that it's difficult to draw concrete conclusions on the overall small cell market based on an analysis of New York City or other major markets.

"There were areas where the observed deployments looked like they had gone through a randomizer and competing nodes were installed on poles in very close proximity to one another, with underlying fiber infrastructure that was likely somewhat redundant. New York is a complex market for small cells and one that cannot be accurately described by a simple thesis," the firm wrote.