They shuffle hesitantly or stride with purpose, but the posture is always the same: Chin tucked into clavicle, eyes downcast and locked to the life-support device cradled in the palm of an outstretched hand. Sometimes a set of headphones provides further sensory escape from the physical surroundings. Behold the "smombie," a creature taking over the streets of major cities everywhere.

Despite the sinister-sounding name, the smombies -- an amalgam of "smartphones" and "zombies" -- are usually a danger only to themselves. Occasionally they can be seen clanging into street furniture, somersaulting down flights of stairs or plunging headfirst into public fountains. Sometimes they turn aggressive. A partially sighted bystander who uses a white stick says his failure to budge out of the way prompted verbal abuse -- in a rare display of real-world engagement -- from one of the monsters.

Day of the Living Dead 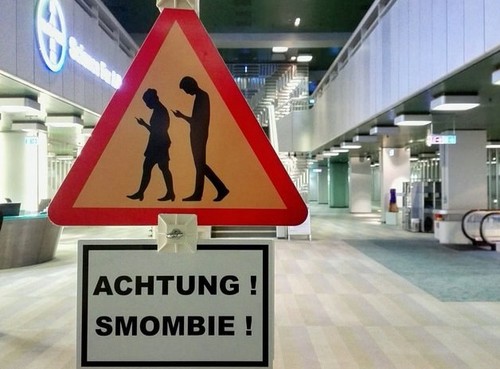 The smartphone undead are a road hazard in cities around the world.

Dealing with the smombie pandemic has become a 21st-century concern for governments worldwide. In South Korea, authorities hope floor-level street lights might be glimpsed by smombies about to splatter themselves over oncoming traffic, reports The Economist. Insurers now estimate about 370 road accidents a year are caused by the smartphone undead, it says.

Governments in other countries seem likewise to have given up efforts to find a cure and tried containment instead. The Netherlands and Germany have also reportedly installed ground-level traffic lights to catch the attention of accident-prone smombies. China's preference is apparently for a dedicated smombie lane on the sidewalk. It was introduced in the city of Chongqing as far back as 2014 in possible anticipation of smombie attacks on regular pedestrians. Zombies travel in slow-moving, elongated herds in the movies and TV shows; now smombies can follow suit in real life.

The arrival of 5G and the "unlimited" data tariff could add to the smombie ranks and worsen the condition. Restricted to slow 4G connections and data caps, most smombies are texting or using relatively undemanding social-media services, Light Reading's extensive research indicates. Transported into a full-on gigabit experience, with new fold-out phones, they will be free to watch entire episodes of Stranger Things -- a Netflix show about weird creatures in a pre-smartphone setting -- while on the move.

But if this sounds terrifying enough, an even grislier scenario could unfold with the dawn of 5G wearables. Stick a pair of virtual-reality goggles onto the head of a typical smombie and his final links to reality might be severed. "Immersive" technology could be the viral strain that mutates the smombie into a fully disengaged technophile. What to call this new species? Perhaps wombie -- for wearable plus zombie -- would do it.

Those looking for refuge from the smombie apocalpyse can, like the protagonists in zombie flicks, head out of the cities. In countryside locations such as the UK's Isle of Wight (home to Eurobites editor Paul Rainford), mobile data means library books in transit and 4G is science fiction. Visitors and residents neither too old nor too young to be a smombie attract disapproving stares with smombie-like behavior.

But the sanctuary is under threat: In the UK, Vodafone's local unit has named the isolated Isles of Scilly, home to about 2,200 people, as one of the first places that will benefit from 5G. The technology will be a "game changer," said Scott Petty, the operator's chief technology officer, providing locals with "much improved access to important online services." At least, in such an out-of-the-way place with few people and fewer cars, authorities probably don't have to worry about traffic lights.

James_B_Crawshaw 7/8/2019 | 12:10:16 PM
Revenge of the Killer Scooters Smombies are nothing compared to lunatics on electric scotters whizzing about the pavement mowing pedestrians down. It's panic of the streets of Paris ... Dublin, Dundee, Humberside.

The GSMA deserves credit for putting on its show in such difficult circumstances, but this was an MWC the industry will want to forget.