Comcast is evaluating its options as new wireless spectrum options emerge in the CBRS band and C-Band. But the cable operator is not yet ready to commit to a path as it explores possible ways to offload MVNO traffic for Xfinity Mobile.

"We are absolutely looking at options and leveraging our infrastructure with wireless options," Dave Watson, president and CEO of Comcast's cable unit, said Thursday on the company's Q3 call. "We're actively testing the options of being able to offload [traffic] in any number of ways." 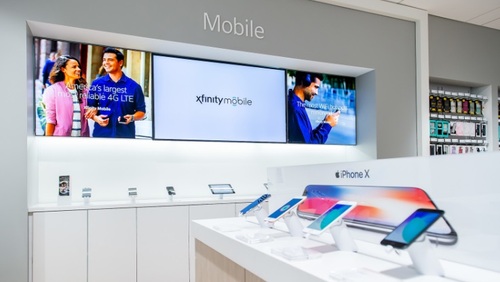 Comcast says it is being opportunistic about emerging spectrum options that could offload some MVNO traffic and improve the economics of its mobile business.

Comcast has conducted tests in the 3.5GHz CBRS band, but has not announced any firm plans about whether to focus solely on unlicensed opportunities in that band or to pursue licensed spectrum when the FCC opens up bidding in the CBRS band. The C-Band could represent more midband spectrum opportunities for Comcast and other MSOs as the FCC prepares to open up and auction off capacity in that band. So far, most US cable operators have steered clear on bidding for millimeter-wave spectrum that some mobile operators, such as Verizon and AT&T, are using to power early 5G network deployments.

For now, Comcast is being cryptic about its future spectrum intentions.

"We'll continue to look at the trade-offs on price and volume and the amount of data on our MVNO network and when you offload data onto our own network," Watson said on the spectrum question. "We'll be opportunistic when things come up  more to come later, but we'll actively consider that."

Comcast was also asked how it might manage traffic running on its current MVNO network and potential future networks that operate on separately owned or managed wireless spectrum.

Watson said Comcast, as part of its exploration of MVNO traffic offload, is testing eSIM and dual-SIM capabilities on both IoS and Android devices.

"We're very active in thinking through that," Watson said. "It's early, but I do think that there is promising opportunities when you combine dual-SIM with the cable infrastructure."

Fellow US cable operator Altice USA is already well down that path with Altice Mobile. Altice USA -- which has an MVNO deal with Sprint but operates the mobile service on its own core mobile infrastructure -- owns the SIM cards used in its customer smartphones, allowing those devices to access both the Sprint and AT&T mobile networks.

Mobile economics improve
Meanwhile, the economics of Xfinity Mobile, a service that Comcast launched in May 2018 to help stoke broadband growth, are improving as the service scales up and the cableco improves the service's underlying operations.

Adjusted EBIDTA losses at Xfinity Mobile narrowed to $94 million in Q3 2019, an improvement from a $178 million loss in the year-ago quarter. But the Q3 loss was still more than what the analysts at Lightshed Partners were expecting. 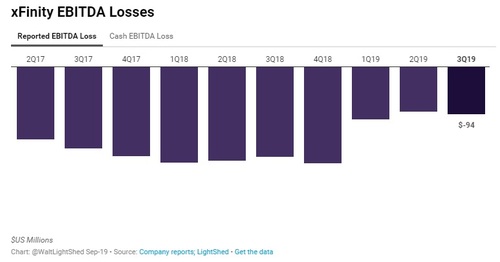 Wireless-related losses are declining at Comcast, but at least one analyst doesn't see this part of Comcast's business reaching the break-even point until 2021.

"There are no signs that it can break-even anytime soon," Lightshed analysts Walter Piecyk and Joe Galone wrote in this blog post (registration required).

They noted that Charter Communications, another Verizon MVNO partner, recently said it could break even at 2 million mobile subscribers. Lightshed expects Comcast to reach that mobile sub milestone next quarter, but doesn't see Comcast reaching the break-even point until 2021.

Meanwhile, if higher MVNO costs are preventing Comcast from lowering those losses further, it might give the cable op "some incentive to bid" on CBRS Priority Access Licenses next year, they added.

Xfinity Mobile ended Q3 with 1.79 million lines after adding 204,000 in the period, slightly ahead of the expectations of analysts at Lightshed Partners.

"It's becoming increasingly clear that Comcast's wireless offering is simply playing a supporting role to residential broadband, which performed well this quarter," the Lightshed analysts noted. "It was only a few years ago that investors feared Comcast and other cable operators would become major disruptors to the wireless industry, destroying margins and spiking industry churn. It's no longer 'too early' to draw conclusions. They aren't."

Meanwhile, Craig Moffett, analyst with MoffettNathanson, said in a separate research note that wireless is the "most likely candidate for a new bull narrative" for Comcast.

"It's a large market, and, importantly, expectations for Comcast in wireless are still very low," Moffett added. "There's an emerging bull case to be made based on traffic offload onto proprietary strand-mounted CBRS-based small cells."