60GHz: A Frequency to Watch

It's now likely that 60GHz will become the next big frequency in wireless world, with both short-range and wider area applications ahead for the tiny beams of this unlicensed millimeter radio technology.

The frequency -- part of the V-Band frequencies in the US -- is considered among the millimeter radio (mmWave) bands. Millimeter wave radios ride on frequencies from 30GHz to 300GHz. Until recently, 60GHz has typically been used for military communications. (See 60GHz Giddyup.)

Why 60GHz, and why now? Here are a few pointers for you.

Drivers
WiGig: A new short-range wireless specification -- using the Institute of Electrical and Electronics Engineers Inc. (IEEE) 802.11ad specification -- that can link devices at up to 7 Gbit/s over a distance of up to 12 meters. That's 10 times faster than the current 802.11n WiFi, though with less range. This makes the technology ideal for wirelessly delivering high-definition video in the home. The Wi-Fi Alliance is expecting WiGig-certified products to arrive in 2015. (See Wi-Fi Alliance, WiGig Align to Make WiFi Super Fast.)

Wireless video: Some startups have jumped the gun on the WiGig standard and plowed ahead with their own 60GHz video connectivity using the Sony-backed WirelessHD standard.

Why 60GHz?
A global unlicensed band exists at 57-64GHz. It is largely uncongested compared to the 2.5GHz and 5GHz public bands currently used for WiFi. (See FCC to Enable Fast Streaming With New 60GHz Rules.)

There's also a lot of it. "The 60 GHz band boasts a wide spectrum of up to 9GHz that is typically divided into channels of roughly 2GHz each," Intel Corp. (Nasdaq: INTC)'s LL Yang wrote in an article on the prospects for the wide-area and short-range use of the technology. Spectrum availability is "unmatched" by any of the lower-frequency bands.

The spectrum is now open and approved for use across much of the world. This includes the US, Europe, and much of Asia, including China. Here's a spectrum map from Agilent on the band's global availability.

Issues with 60GHz
No technology is ever perfect, right?

Transmissions at 60GHz have less range for a given transmit power than 5GHz WiFi, because of path loss as the electromagnetic wave moves through the air, and 60GHz transmissions can struggle to penetrate walls. There is also a substantial RF oxygen absorption peak in the 60GHz band, which gets more pronounced at ranges beyond 100 meters, as Agilent notes in a paper on the technology. Using a high-gain adaptive antenna array can help make up for some of these issues with using 60GHz for wider area applications.

Some vendors have also argued that there are potential advantages for the technology over omnidirectional systems. "The combined effects of O2 absorption and narrow beam spread result in high security, high frequency re-use, and low interference for 60GHz links," Sub10 Systems Ltd. notes.

Next time, we'll look at some of the key private and startup companies looking to ride the 60GHz wave.

As such, there are different regulation schemes for each application, and that includes Tx power, Antenna gain, modulations and channel widths and arrangements.

Most of the products available today for outdoor P2P applications were developed before the rush for the small cell backhaul era and are striving to become candidates for this promising application. Now, let's list the essential capabilities mobile operators are not going to compromise while choosing small cell backhaul solutions:


The solutions mentioned by Dan are all FDD, and have single (!!!) frequency channel. How can they fit at a dense urban to backhaul small dozens of small cells? Scalability and efficiency were not part of the design fundamental when those were made. Gigabit ports. Again, the solutions mentioned here all have single port and they also fail the size and shape criterion. Bear in mind: the only real small cell and street level solution, designed from scratch for dense urban environment while targeting all those important issues (and many more) is Siklu's EH-600T. Now take a look and realize what leading small cell outdoor backhaul pioneers already understood while bringing this innovative product 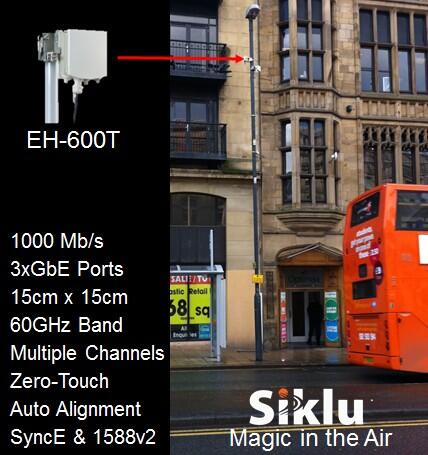 DanJones 7/11/2014 | 5:13:42 PM
Re: waiting for Software Defined Radio... Possible, but probably a long, long way off. Some people are considering 100GHz for longer range stuff but I haven't seen much actual work in that area beyond academic presentations.
Reply | Post Message | MESSAGES LIST | START A BOARD

mhhf1ve 7/11/2014 | 4:36:08 PM
waiting for Software Defined Radio... Keeping track of all the frequencies should be done with software... There have been a few projects to try software defined radio, but apparently the complexities are still a bit un-economical for practical use.

fgoldstein 7/11/2014 | 10:59:41 AM
Re: Fills niche 60G is unregulated because it's the peak absorption frequency of oxygen, with dry air attenuation at 14 dB/km.  Its Primary occupant is satellite-satellite communications; the atmosphere provides a nice blanket to protect it from surface users.  WiGig is a perfectly sensible way to sent a heap of bits across a room without messing up the getting-crowded 5G band.

The FCC's new ptp rules are very generous; they allow up to +30 dBm (1 watt) output and +82 dBm EIRP.  Nobody's building that yet, though, and boy would that 52 dB antenna (only 2 feet) need to be carefully aimed.  We have a bunch of Bridgewave 60G radios and they can pump a huge amount of data for half a mile or so.  But not in heavy rain -- the NMS chart of received signal strength is not a bad rainfall meter. (A cheap 5G radio makes a nice backup.) The licensed 80GHz band has slightly more rain fade but not the oxygen attenuation, so it can go a little farther in dry weather.