The next chapter in 5G's technology story is about to get written.

The 3GPP -- the industry association tasked with fleshing out the world's 5G standard -- finished its latest meeting in Sitges, Spain, last week, and members voted to move forward on a wide variety of new and fancy technologies and capabilities that could eventually be incorporated into commercial 5G networks.

However, actual users probably won't see the results of the group's efforts anytime soon. That's because the 3GPP plans to spend the next year or so fleshing out the technologies under discussion into actual specifications. And then, only after all that work, will vendors and operators be able to begin offering them to customers. That whole process could take years to play out.

Nonetheless, the efforts last week by the 3GPP are important considering the association comprises members from across the global wireless industry, from chipset purveyors to network infrastructure vendors to wireless network operators hailing from countries ranging from the UK to China to the US. Thus, what comes out of 3GPP meetings often reflects the long-term 5G technological roadmaps of some of the world's biggest technology companies, as well as the ways in which 5G providers hope to actually make money from their efforts.

So what exactly came out of the 3GPP's meeting last week? Members of the association voted to begin official work on a handful of new technologies they hope to eventually implant into the wider, official 5G technology standard. Those technologies include:

There are plenty of other items on the 3GPP's checklist -- the association voted to begin work on a total of 24 different technology projects -- but many of them involve either updates and enhancements to previously established technologies (like Integrated Access Backhaul (IAB) or Dynamic Spectrum Sharing (DSS)) or are mostly arcane issues that only a handful of engineers really care about (like additional enhancements to Massive MIMO.) 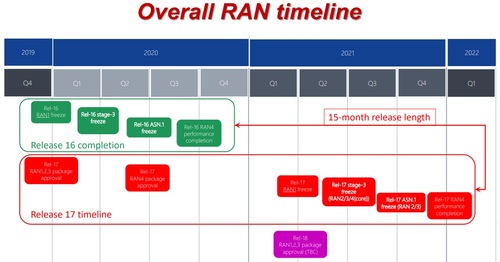 After the 3GPP releases its specifications, then vendors can begin incorporating those technologies into their products. Then, those products can be sold to wireless network operators, which can then begin using the technologies in actual services to customers.

A debate over timelines
Analysts who attended the 3GPP's event last week noted that one of the most contentious issues discussed in Sitges involved deadlines. Two separate groups within the 3GPP that are working on different technologies set different deadlines for when they'll complete their work on their respective Release 17 efforts. One group, RAN, said it will finish its work within 15 months, but another group, SA, said it will need 18 months to finish its work. The two groups were not able to reconcile those different timelines, which is unusual within the 3GPP.

"Both parties are moving forward with their own timelines," wrote the analysts with Signals Research Group. "Presumably, this issue will get resolved at the March plenary once the dust has settled. To some extent, this whole debate is a moot point. Completing Release 17 in fifteen months without the features and functionality that various vertical markets want included [in SA] isn't a good option. Conversely, adding three months to the schedule isn't the end of the world if it gets everyone what they want. It is also a better option than shifting the functionality to Release 18."