With $7.6B in Auction Bids, Demand for mmWave Spectrum Exceeds Expectations

Specifically, gross bids in the auction reached $7.6 billion during the "clock" phase, and bidders won roughly 99.9% of all available licenses. The FCC will release the identities of the winning bidders at the end of the event, but companies like AT&T, Verizon and T-Mobile are widely expected to walk away with the bulk of the spectrum licenses available in the auction.

Importantly, that $7.6 billion auction total is almost double some initial expectations. For example, the analysts at Wall Street research firm Raymond James wrote in an October report that there's "not much treasure" in the auction. They estimated at the time that the auction would raise around $3 billion in total bids.

Similarly, analyst Tim Farrar with TMF Associates wrote before the auction that it could generate up to $7-8 billion in total proceeds, based on the results from the FCC's previous mmWave spectrum auctions. But he said that $5 billion in auction proceeds might be more likely considering companies like AT&T and Verizon have already snapped up extensive mmWave spectrum holdings.

"The $7.6 billion raised is somewhat higher than many expected, especially considering that so many major players already had purchased millimeter wave spectrum prior to this auction," noted Richard Engelman, an engineering consultant at law firm Wiley Rein LLP, in a statement. Wiley Rein is heavily involved in the telecommunications sector. "Also, with a limited number of bidders and lots of spectrum being sold (3,400MHz), it seemed as though supply could have easily overwhelmed the demand, driving prices lower than in earlier auctions. It will be interesting to see how many blocks most bidders purchased in a market, but it could well be that the ability to have lots of bandwidth, and therefore capacity, was compelling to bidders."

Dubbed Auction 103, this is the FCC's third mmWave spectrum auction, and by far its biggest, both in terms of the money raised and the amount of spectrum available. The FCC's Auction 101 for 28GHz spectrum licenses raised $703 million in total bids, while its Auction 102 for 24GHz licenses raised $2 billion in bids. Both auctions ended last year. Verizon, AT&T and T-Mobile spent the most money on spectrum licenses during the FCC's two previous mmWave spectrum auctions. The agency's ongoing Auction 103 stretches across the 37GHz, 39GHz and 47GHz bands.

Auction 103 details
While the FCC is not disclosing the identities of Auction 103 bidders, it is showing the geographic locations where bidders are competing for mmWave spectrum licenses: 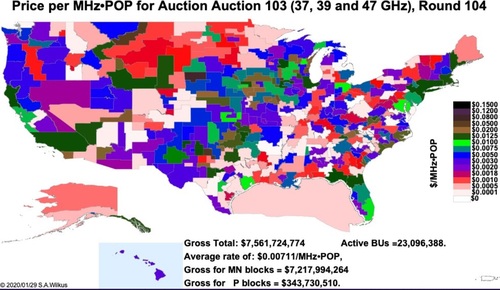 The FCC is also showing what kinds of spectrum licenses bidders are interested in: 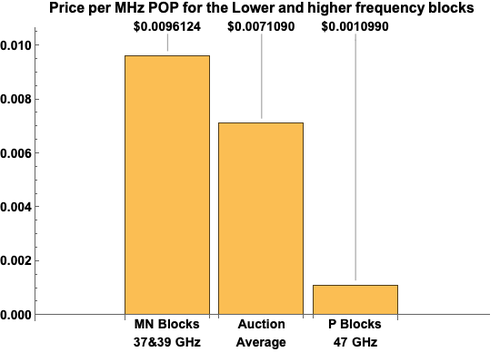 There's clearly not much interest in 47GHz licenses.

Now that the "clock" phase of Auction 103 is over, the event will at some unspecified point in the future move into the "assignment phase." That phase involves bidders choosing the specific licenses they want, but that isn't expected to raise gross proceeds in the event much beyond the current total.