If youre reading this article on a wireless device, chances are youre connected to the Internet via WiFi.

WiFi networks have historically handled more than four times the traffic that cellular networks do, according to Ciscos Visual Networking Index. Cellular traffic is growing faster, but its not expected to catch up with WiFi anytime soon. By 2022, Cisco projects that 201 exabytes of monthly data will be transmitted worldwide on fixed/WiFi IP networks, versus 77 exabytes per month on cellular networks and 116 exabytes per month on wireline networks.

And, with WiFi about to surpass wireline as users' top onramp to the Internet, the WiFi community has just launched a new WiFi standard to handle exploding traffic. WiFi 6 promises to increase bandwidth by several orders of magnitude to support more users and use cases. Already Apple's newest iPhones support WiFi 6. Indeed, the same dynamics that are driving cellular operators toward the more efficient 5G technology standard are nudging enterprise and public venue IT managers to upgrade to WiFi 6.

"All the access point manufacturers are super excited because they believe they will sell thousands, if not millions," of new WiFi 6-capable units, said Tiago Rodrigues, general manager of the Wireless Broadband Alliance. In addition to mobile network operators such as AT&T and Comcast, the WBA counts WiFi access point makers like Cisco, HP and CommScope's Ruckus among its membership. The group advocates for the integration of cellular and WiFi -- for example, the WBA recently partnered with the Next Generation Mobile Networks (NGMN) Alliance on a white paper exploring "the importance of existing and future WiFi and cellular convergence."

Example Deployment for Convergence of Enterprise WiFi with 5G 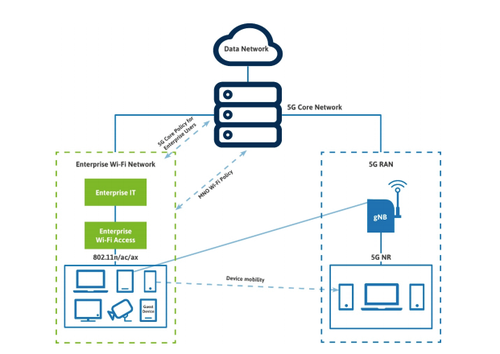 According to analyst Dean Bubley, director of Disruptive Analysis, the indoor/outdoor separation of WiFi 6 and 5G is a fairly accurate prediction. Bubley said that for now, the two technologies have very different use cases.

"A lot of 5G will be in mid-band and millimeter-wave spectrum that wont transition outdoor-to-indoor," said Bubley. "Itll take years for decent 5G indoor coverage. In most enterprise venues and public locations, WiFi will remain predominant for all PC/tablet usage, a lot of cellphone usage and a far larger percentage of IoT connectivity." All of these WiFi use cases will become much more robust with the arrival of WiFi 6, he said.

"It will give us additional revenue opportunities for these new connected devices that want to be on the network," said Boingo CTO Derek Peterson of WiFi 6. Boingo builds indoor wireless networks for 4G, WiFi, and 5G. But things are changing such that a single access point will soon be able to support dozens of people and a wide range of connection technologies.

Borrowing from 4G to boost WiFi
The newly ratified WiFi 6 standard includes many of the same technological advancements that are in the LTE and 5G transmission standards. Like 5G, it uses orthogonal frequency division multiple access (OFDMA) to increase transmission efficiency. The previous version of WiFi used orthogonal frequency division multiplexing (OFDM), which divides signals into evenly space sub-channels, meaning that only one device can transmit on a given sub-channel at a given time. WiFi 6, on the other hand, uses OFDMA to add time-division multiplexing, meaning that the same sub-channel can transmit multiple data streams at one time. WiFi 6 also adds multi-user multiple input multiple output (MU-MIMO) in the uplink, a technology previously only used in the downlink in WiFi.

Qualcomm said its new WiFi 6 chipsets would enable access points to support multiple devices on each channel -- 37 simultaneous OFDMA users and 8 MU-MIMO users per channel. Up to 1500 devices can maintain a connection to the access point at one time, Qualcomm said, although not all can send or receive at the same millisecond.

However, despite its upgraded specs, WiFi 6 is no substitute for 5G, according to Bubley. WiFi 6 will be used for enterprise connectivity and low-power IoT devices, while 5G will be a mobile solution for smartphones and other portable devices, and eventually will connect big machines like automobiles that need ultra-low latency.

Can mobile network operators monetize WiFi 6?
WBAs Tiago Rodrigues answers that question with an emphatic "yes." He thinks technology like the WiFi Alliances Passpoint, which enables cellular devices to find and connect to trusted WiFi networks automatically, creates an opportunity for mobile network operators to offer bespoke services or content to users while they are connected to WiFi 6 networks. AT&T recently inked a major WiFi offloading agreement with Boingo that will push AT&T's cellular traffic in select airports to Boingo's WiFi network via Passpoint. But Rodrigues thinks Asian operators may be the first to integrate WiFi with the mobile core.

"The Korean [cellular] operators are quite advanced in integrating WiFi to their mobile cores," Rodrigues said. "I expect that they will be pioneers."

However, within the WiFi industry, integration with the mobile core is at times viewed with skepticism, explained Claus Hetting, CEO of WiFi advocacy and event group Wi-Fi NOW. Hetting said he worries about mobile operators trying to usurp WiFi users. He said the best way to avoid this is to concentrate convergence at the device level.

Hetting explained that one way to integrate WiFi and cellular at the device level is with multipath TCP (transmission control protocol). "Our members have been looking with some enthusiasm at multipath TCP," acknowledged WBAs Rodrigues. "It reads two radio access data packages and can receive data at the same time from LTE and WiFi."

Along these lines, AT&T collaborated with researchers at the University of Michigan to study multipath TCP, and the team published a paper that highlighted both opportunities and challenges, noting that Apples Siri application is already using multipath TCP. But the researchers said some mobile applications would see a deterioration in performance if they try to use multipath TCP because of the protocols relatively high energy requirements. They also cited "unexpected cross-layer interactions" as a potential obstacle to multipath TCP.

gekiyir231 3/22/2020 | 1:24:14 PM
Re: WiFi Wi-Fi standards can be hard to keep up with. Until recently, identifying different Wi-Fi speeds and frequencies required decoding different 802.11 standards. Fortunately, with the release of Wi-Fi 6 (a.k.a. 802.11ax) Wi-Fi versions are being categorized into easy to understand numerical versions.
Reply | Post Message | MESSAGES LIST | START A BOARD

gekiyir231 3/22/2020 | 1:11:43 PM
Upgrade Your Wi-Fi Router Wi-Fi standards can be hard to keep up with. Until recently, identifying different Wi-Fi speeds and frequencies required decoding different 802.11 standards. Fortunately, with the release of Wi-Fi 6 (a.k.a. 802.11ax) Wi-Fi versions are being categorized into easy to understand numerical versions.
Reply | Post Message | MESSAGES LIST | START A BOARD

Thaddeus17 10/24/2019 | 11:35:08 AM
Use case driven Yes, both 5G and WiFi 6 will co-exist, and each NW will serve different sets of use cases.  Efficiencies will not be achieved by either NW trying to play out of position.  Very different use cases will determine best NW (indoor vs.outdoor, close range vs. highly mobile, etc.).  The real advantage to business will be the level of integration that is achieved, providing seamless services across the NW's.
Reply | Post Message | MESSAGES LIST | START A BOARD

brown7278 10/18/2019 | 2:33:03 AM
WiFi No, there is nothing to be worried about because the WiFi is the most important thing nowadays and it can be connected via mobile phones or laptops. So, there is no need to worry for the mobile operators. On the other side, if anyone needs to know about how to connect WiFi6, then they must visit how to setup a wireless router. It will provide the process in detail.
Reply | Post Message | MESSAGES LIST | START A BOARD

obonaventure 9/28/2019 | 10:11:10 AM
Multipath TCP in 5G networks Given the growth of mobile/tablet data usage, it is clear that Wi-Fi and 5G networks will need to better coexist than today's 4G/Wi-Fi coexistence. 3GPPP has analyzed this problem last year and have developed the  Access Traffic Steering, Switching and Splitting (ATSSS). In a nutshell, ATSSS leverages the Multipath TCP protocol that has been used by Apple since 2013 to improve user experience with Siri on all iPhones and is now used to provide the same benefits for Apple Maps and Apple Music since iOS13. Multipath TCP enables the simultaneous utilisation of 4G and Wi-Fi interfaces to provide loss-free and seamless handovers but also to support bandwidth aggregation. ATSSS combines Multipath TCP with the 0-RTT Convert protocol that is being finalised within the IETF, see https://datatracker.ietf.org/doc/draft-ietf-tcpm-converters/

The first ATSSS prototype has been demonstrated by Tessares and KT in Korea recently, see https://www.tessares.net/solutions/5g-atsss-solution/