What Does Dish's Charlie Ergen Want?

Dish Network's Charlie Ergen is undoubtedly having an interesting week.

According to reports from the likes of Fox Business and Bloomberg, Ergen is deep in the midst of final negotiations with T-Mobile and the Department of Justice (DoJ) over a potential deal that would pave the way for T-Mobile to consummate its merger with Sprint.

The terms of that possible deal appear to be continually shifting, and a transaction may not ultimately come to pass.

But the bottom line is that maverick Charlie Ergen has emerged as the linchpin in the government's attempts to both approve a merger between the nation's third- and fourth-largest wireless providers and to keep the number of nationwide wireless network operators at a solid four.

This is a pretty striking situation, given that Dish's Ergen has been a longtime and outspoken opponent of T-Mobile's attempts to purchase Sprint. Moreover, Ergen has reportedly earned the ire of everyone from Verizon's former CEO to the chairman of the FCC.

And all of this is compounded, and exacerbated, by the fact that Ergen has amassed close to 100MHz of midband spectrum holdings over the past decade -- holdings that rival those of T-Mobile and Verizon. 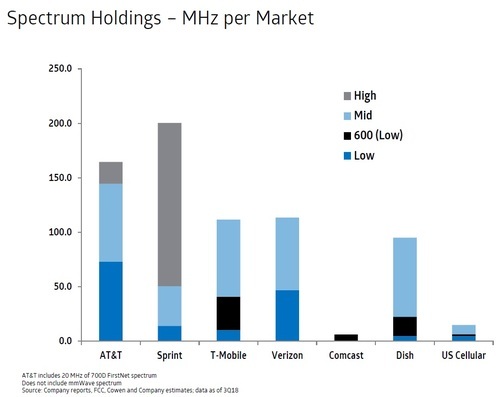 So, as Ergen plays a starring role in what may result in the dramatic overhaul of the nation's telecommunications market, it's worth considering what exactly he might be thinking this week as he negotiates with DoJ antitrust chief Makan Delrahim, Deutsche Telekom CEO Timotheus Höttges and T-Mobile CEO John Legere, among others.

Obsessed with spectrum
Ergen is the quintessential American entrepreneur. He made a name for himself as a professional blackjack player, and then built Dish Network into one of the nation's biggest TV providers by initially starting the business out of the back of his van.

And Ergen hasn't rested on his laurels. Dish Network's Sling TV was the first online streaming linear TV provider, before YouTube TV and AT&T's DirecTV Now hit the space. Recently, Dish has strayed into IoT with a small acquisition and plans to build an NB-IoT network nationwide.

But it appears to be spectrum that has really captured Ergen's imagination in recent years. His first venture into wireless centered on a relatively minor purchase of E Block licenses for $700 million in the FCC's 700MHz spectrum auction in 2008, made by Ergen's EchoStar. But then Dish in 2011 spent $2.77 billion to acquire 40MHz of S-band satellite spectrum from bankrupt TerreStar and DBSD North America, signaling greater ambitions. Then, in 2014, Dish was the only bidder in the FCC's H Block spectrum auction, essentially walking away with 10MHz for around $1.6 billion. And in 2015, Dish went big by dropping $8 billion on AWS-3 spectrum licenses in an FCC auction, and then just two years later it committed a whopping $6.2 billion to buy 486 licenses in the FCC's 600MHz incentive auction.

Indeed, it appears that Ergen simply can't help himself when it comes to spectrum. Although he has acknowledged that Dish already owns plenty of spectrum and is now focused on putting it to use, the company nonetheless spent around $15 million this year in the FCC's 24GHz and 28GHz auction of millimeter-wave spectrum.

As Dish Network's satellite TV business continues to slow, and its Sling TV shows no signs of capitalizing on its first-mover advantage in linear streaming TV, Ergen appears to have fully turned his attention toward the wireless industry. Perhaps the most obvious signal was his decision in 2017 to step down as the CEO of Dish in order to focus solely on the company's spectrum portfolio.

A $10 billion 5G network
As Dish spent billions of dollars over the years collecting spectrum licenses, most analysts believed that the company would eventually cash out on that investment by selling its spectrum to a company like Verizon. Indeed the Wall Street analysts at New Street Research predicted in 2015 that Verizon had no other options and would be forced to purchase spectrum from Dish in order to keep pace with its customers' data demands.

But that didn't happen.

So, as the FCC's buildout deadline on some of Dish's spectrum licenses inched ever closer, Ergen unveiled the first phase of Dish's plan to make money from its spectrum investments absent a sale.

The first phase of Dish's plan involves spending up to $1 billion to construct a nationwide NB-IoT network for IoT applications. Although Dish maintains that the network is a commercial endeavor, analysts continue to believe that the network is simply a way for Dish to meet the FCC's network deployment requirements so that the company can maintain ownership of its spectrum licenses.

But it's really the next phase of Ergen's plans that raises eyebrows. The company said that it expects to spend roughly $10 billion constructing a full-blown, high-speed, nationwide 5G network, one that would compete directly against the 5G networks of AT&T and Verizon.

In disclosing his plans, Ergen has said that Dish's 5G endeavor is reminiscent of his first steps in the 1980s, building Dish Network out of the back of his van.

A win-win situation?
And this is where T-Mobile enters into the story. Just over a year ago, T-Mobile announced its plans to merge with Sprint and to build the nation's most powerful 5G network. Ergen's Dish was a vocal opponent of the deal from the start.

Now, however, Ergen is negotiating with the DoJ and T-Mobile on a deal that would save the proposed merger as well as potentially give Ergen sizable chunks of T-Mobile's spectrum portfolio, its prepaid customer base, a wholesale MVNO deal and potentially even funding for Dish's 5G buildout.

Although the FCC has already signed off on T-Mobile's proposed transaction with Sprint, the DoJ is reportedly unwilling to approve the transaction unless there is a way to prevent the US wireless industry from shrinking from four nationwide providers to three. Ergen appears to be promising to position Dish Network to replace Sprint as the nation's fourth nationwide wireless provider.

Again, it is unclear whether Ergen will actually consummate such a transaction -- or even if he really wants to.

Ergen's options
Charlie Ergen has two basic options in his negotiations with the Department of Justice and T-Mobile.

1. He could ask for conditions that are so egregious that the deal would have to be scrapped -- in effect killing the transaction between T-Mobile and Sprint. If Ergen kills the deal, then he could potentially sell his spectrum to T-Mobile, Sprint or Verizon, in which case he would be able to cash out on the massive investments Dish Network has made in purchasing spectrum over the past 11 years. Ergen may ultimately want to kill the Sprint/T-Mobile merger because it would essentially eliminate two of Dish's best potential customers for its spectrum holdings.

2. He could ink some kind of transaction that would give Dish Network even more spectrum as well as Sprint's existing prepaid customers, wholesale access to T-Mobile's network as an MVNO and potentially even financing that would help Dish build its own 5G network. Indeed, Ergen is undoubtedly asking T-Mobile and Sprint for help building Dish's planned 5G network, help that would likely involve T-Mobile installing Dish's 5G antennas alongside T-Mobile's own 5G antennas. If Ergen consummates this kind of deal, he would probably walk away with sweetheart pricing for T-Mobile's spectrum and customers and access to its network, as well as government aid in the form of waived spectrum license buildout requirements and potentially other incentives to build a 5G network, considering that 5G is now a national priority.

It's unclear which option is better for Ergen. On the one hand he could cash out on Dish's spectrum investments by selling that spectrum, but doing so would essentially relegate Ergen to the head of a company that is almost undoubtedly on its way to a slow and painful demise in the shrinking satellite TV business.

On the other hand, Ergen could walk away with almost all he needs to build out a fourth nationwide 5G network. But then he would have to find a way to make money from that network. And to say that it would be difficult to compete against AT&T and Verizon in 5G from a late and lagging position is an understatement. Ergen has pointed to Rakuten in Japan and Reliance Jio in India as examples of how Dish might go about building a 5G network on the cheap, but it would still take several years and billions of dollars to construct any kind of competitive offering.

Nonetheless, some analysts are upbeat on Ergen's position: "All said, deal or no deal, Dish is generally in a win-win situation," wrote the analysts at Wall Street research firm Cowen in a recent note to investors. "Either Dish demands and receives a sweetheart deal (including concession with the FCC on the shot clock and AWS-3 discount dispute) or it walks away. If the deal were to break, both T-Mobile and Verizon could end up paying up for spectrum, turning to the Dish portfolio. For a Dish investor, deal breakage seems like the better, easier scenario (with far fewer risks). Mr. Ergen has a track record as 'deal agitator' in the past (see Softbank/Sprint, Sprint/ Clearwire, Ligado), and this could be yet another ruse. Then again, Mr. Ergen also has a track record of overplaying his position (in 2014 shares were >$70) and facing a contentious FCC."

The industry's best soap opera
Whatever happens, it will have major ramifications for the wireless industry. If Ergen creates a fourth nationwide wireless player, that would impact AT&T, Verizon, and virtually everyone else in the space, including the nation's cable companies. But if Ergen blocks the deal between T-Mobile and Sprint, that could push T-Mobile to purchase Dish's spectrum and Sprint to file for bankruptcy, at the very least.

Much hangs on the result of the negotiations going on this week among Ergen, Legere and Delrahim. Whatever the result, Ergen is certainly putting on an interesting show.

Kelsey Ziser 7/10/2019 | 4:50:26 PM
I'll tell you what I want, what I really really want Anyone else have that Spice Girls song stuck in their head after reading this headline?

Question from an overseas reader: does Dish really have this much leverage that the deal can't go ahead without its participation?

Mike Dano 7/11/2019 | 10:00:11 AM
Re: Kingmaker The only real leverage it has is that it's the only company that has stepped forward as a possible fouth nationwide competitor, which is what the DoJ wants, what it really, really wants.
Reply | Post Message | MESSAGES LIST | START A BOARD

Gabriel Brown 7/12/2019 | 3:25:59 AM
Re: Kingmaker Maybe Dish has to look like it will invest and become a fourth competitor to elicit bids for the spectrum from incumbents?

Even with a $10 billion build cost (plus spectrum costs) it will still need to find substantial annual capex to stay in the game. Sounds expensive.