Vodafone appears to be considering a sale of infrastructure assets after setting up what it describes as a "virtual internal tower company" across its European operations in a further bid to reduce costs.

Nick Read, the operator's new CEO, said he is "reviewing the best strategic and financial direction for these assets" as Vodafone Group plc (NYSE: VOD) swung to a net loss of 7.8 billion ($8.8 billion) for the first six months of the current fiscal year from a net profit of 1.2 billion ($1.4 billion) a year earlier.

Sales were down 5.5%, to around 21.8 billion ($24.5 billion), but Vodafone blamed this decline and its loss on accounting changes that included impairment charges of 3.5 billion ($3.9 billion) across Spain, Romania and India. A loss on the disposal of Vodafone India, which recently completed a merger with local rival Idea Cellular, was partly responsible for the setback.

However, Read flagged "competitive challenges" in Italy, where a costly spectrum auction and competition from new entrant Iliad have taken their toll. He also noted pressure in the Spanish market.

Read said Vodafone was now targeting full-year EBITDA growth of 3%, having previously offered a range of 1-5% as guidance.

To achieve that cost-cutting goal, Read noted in the half-year announcement that Vodafone's "new strategic priorities focus on driving greater consistency of commercial execution, accelerating digital transformation, radically simplifying our operating model and generating better returns from our infrastructure assets. Our goal is to deepen customer engagement through a broader offering of products and services, and to deliver the best digital customer experience, supported by consistent investment in our leading Gigabit networks." 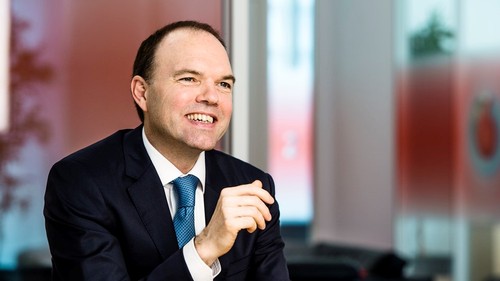 Due to a net cash outflow related to the Vodafone India transaction, as well as spending during Italy's recent spectrum auction, Vodafone's net debt rose to 32.1 billion ($36.1 billion) from 29.6 billion ($33.3 billion) at the end of March.

The move to set up a tower company comes shortly after Bloomberg reported that Vodafone and Telecom Italia (TIM) were in talks to pool their 5G assets and build a joint network.

Read appeared to lash out at the Italian government shortly after the 5G auction, saying that "auctions should be designed to balance fiscal requirements with the need for investment to enable economic development."

Vodafone said its new tower company would manage about 58,000 towers across the European business and have a dedicated management team focused on cost reduction. "We are also conducting due diligence in order to determine the optimal strategic and financial direction of all our tower assets, including those held in joint ventures," said the operator.

The rather gloomy earnings update comes as Vodafone tries to push through a takeover of German and central European assets owned by Liberty Global, one of the region's biggest cable operators.

Vittorio Colao, Read's predecessor, had talked up the cost-saving and commercial attractions of that deal, but it has faced strong resistance from Deutsche Telekom, the German telecom incumbent, and could yet encounter regulatory opposition.

Vodafone's share price has fallen 38% since the start of the year but investors appear encouraged by Read's plans as the operator's stock gained almost 6% in early trading on the London Stock Exchange to 152.9 pence.

I posted a thread on Twitter as I listened in: