Mobile operator Vodafone is gearing up for a full commercial launch of 5G services in mid-2019 in cities and rural parts of the UK and expects to have about 1,000 5G mobile sites in service by 2020.

The UK phone company, which is racing BT Group plc (NYSE: BT; London: BTA) to be the country's first 5G operator, surprised reporters during a press conference at its Newbury headquarters earlier today when it revealed plans to introduce commercial services next year in the rural communities of Cornwall and the Lake District, and not just in more densely populated urban areas. (See BT Kicks Off 5G Campaign With Plans for 2019 Launch.)

"Next year we'll be launching in rural areas where there is great data growth based on innovation in those areas," said Scott Petty, Vodafone UK's chief technology officer. "For instance, Cornwall and the Lake District will have 5G in 2019 and not just London, Manchester, Liverpool, Birmingham and the usual suspects." 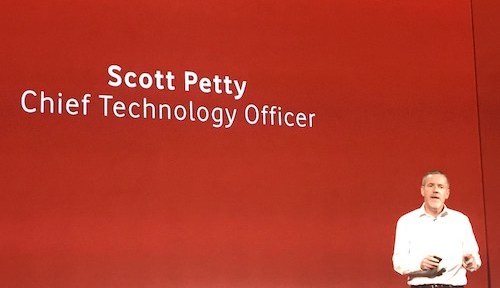 The rural plans are surprising because the widespread assumption until now was that operators would initially deploy 5G in urban hotspots where smartphone usage is gobbling up capacity on existing 4G networks.

Answering questions from reporters, Petty hinted that Vodafone UK might seek to use 5G to meet residential broadband needs in areas that are hard to connect using fixed-line technologies. In an effort to become less reliant on its wholesale arrangements with BT Group plc (NYSE: BT; London: BTA), Vodafone has been rolling out a fixed broadband network in collaboration with a fiber specialist called CityFibre, but that partnership has no plans to cover rural communities. (See Vodafone Gets Set for Gigafast Assault on BT.)

Another possibility is that 5G gets used to support new "Internet of Things" (IoT) applications in the agricultural sector. Vodafone's press conference today featured various examples of IoT services, including a tracking device used to monitor the health of cows.

Those services would run over NB-IoT, a radio technology that now falls under the 5G umbrella and is designed to support gadgets that consume very small amounts of bandwidth. (See Eurobites: Vodafone Goes Large on NB-IoT.)

Petty's remarks suggest a commercial 5G service will also become available next year in some, if not all, of the cities where 5G trials are due to begin. Vodafone has now installed 60 trial 5G sites across the cities of Birmingham, Bristol, Cardiff, Glasgow, Liverpool, London and Manchester.

The main barrier to a "mobile" launch of 5G may be the availability of compatible handsets. While parts of Vodafone's network could be "5G-ready" by mid-2019, Petty does not expect a broad range of 5G handsets to arrive in the market until late 2019 or 2020.

"You will see some announcements around Mobile World Congress [2019] from Android manufacturers with their own silicon," he said. The comments suggest that China's Huawei Technologies Co. Ltd. and South Korea's Samsung Electronics Co. Ltd. (Korea: SEC) may unveil early 5G handsets at the Barcelona trade show, while LG and Motorola are also reportedly aiming to bring 5G devices to market in the first half of 2019.

However, smartphone availability is not the sole 5G challenge that Vodafone faces. There is also concern about the readiness of network equipment, said Petty, with 5G software specifications finalized only in the last year. (See 3GPP Done With 5G SA Specs. Now the Hard Work Begins.)

Vodafone has ramped up investments in RedStream, an optical core network that supports both fixed and mobile traffic and underpins the 5G plan. The operator expects to invest about £700 million ($927 million) in network upgrades and modernization this year, it revealed today.

Asked about the other challenges of deploying 5G technology, Petty said the New Radio antennas were still "bigger and heavier" than Vodafone would like. While the virtualization of the network remains a "big task," progress appears to have picked up in recent months. That should help Vodafone to slash "latency," a signaling delay on data networks, and support new types of 5G service, said Petty.

Despite news of Vodafone's plans for a commercial launch next year, 5G technology is unlikely to be in widespread use for several years. In March, Petty told a conference in London that only 50% of customers will be using 5G technology by the mid-2020s if it follows the same adoption curve as 4G. (See Petty's Grievances: The 5G Hopes & Fears of Vodafone UK's CTO.)

Moreover, Vodafone's 2020 target of 1,000 5G sites appears to represent a fairly small percentage of its total footprint. Gabriel Brown, a principal analyst with Heavy Reading, estimates that Vodafone probably has around 15,000 mobile sites in the UK, but says the figure may be higher when "small cells" -- providing high-speed coverage across very small areas -- are factored in.