Vodafone UK is now boasting a mobile technology lead over chief rival BT/EE as it prepares its networks for a launch of 5G services that could happen as soon as 2019.

Despite last year completing a £2 billion ($2.6 billion), two-year upgrade of its mobile networks, linked to Vodafone Group plc (NYSE: VOD)'s £19 billion ($24 billion) Project Spring investment plan, the operator took some flak after just missing its target of covering 90% of the UK population with 4G technology, and in 2016 had fallen a long way behind BT/EE in the publicity stakes. (See Vodafone Ups 'Project Spring' Capex to $11B+.)

But the operator, which maintains the UK's third-biggest mobile network behind EE and Telefónica UK, has made considerable progress on improving its UK network over the last two years, according to Gabriel Brown, a principal analyst with the Heavy Reading market research and consulting business.

And over the next three fiscal years, including this one, Vodafone UK will pump another £2 billion ($2.6 billion) into the rollout of pre-5G mobile technologies as it looks to compete on the quality of its network offerings.

Among those technologies is a performance-boosting antenna system called massive MIMO that delivers about five to six times more throughput over the same amount of spectrum than older 4G technology, according to Vodafone.

With massive MIMO (which stands for multiple input, multiple output), as many as 64 antennas are included in each of the transmitter and receiver devices, up from a maximum of eight in the most sophisticated older MIMO systems.

The operator claims to have deployed Europe's first massive MIMO sites at its Newbury headquarters and is now planning to introduce the technology at another 30 locations up and down the UK. Those will include bigger cities, and certainly London, as well a major motor racing track.

At about 280 sites covering a large swathe of London, it has already made investments in an older variant of the technology called 4x4 MIMO, which uses four transmitter and four receiver antennas and delivers a 30% improvement in performance, Vodafone claims. "The fruits of Project Spring are here and we have something tangible to speak about," says a spokesperson for the operator. "EE has 4x4 MIMO in a couple of places but that is probably about it." 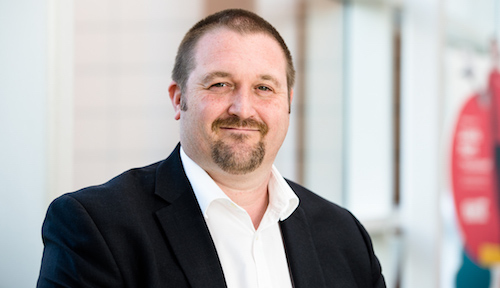 Kye Prigg, head of mobile networks for Vodafone UK, is getting the operator's mobile network ready for the introduction of 5G technology.

All of this moves Vodafone a step closer to the launch of 5G, but the operator has delivered a strong warning that backhaul transmission and architectural changes represent the biggest 5G investment hurdles.

"We're putting 1Gbit/s fiber or microwave into every site we modernize but with 5G you are talking about many gigabits per second per sector and so the limiting factor is going to be getting data from the basestation to the core network," says Prigg. "We're tackling the backhaul part now but we need to work it out on an industrial scale."

That increases the urgency of reaching acceptable terms with BT/EE on access to the incumbent's network of ducts and poles, which Vodafone could use to roll out its own fiber network.

In an effort to spur investment in broadband infrastructure, and level the competitive playing field, regulatory authority Ofcom recently forced BT Group plc (NYSE: BT; London: BTA) into a "legal separation" under which its Openreach infrastructure division is to be managed at arm's length from the rest of the business. (See BT Agrees to Openreach Split.)

The move was less stringent than a complete carve-up of BT that its rivals had called for, but it met with their approval and Vodafone still appears keen to invest under the right conditions. (See BT Split Could Spur Vodafone to Invest in Fiber  Colao and Only BT's Dismemberment Will Sate Rivals.)

"The regulatory picture needs to be clear now that Openreach has been separated," says Vodafone's spokesperson. "We need to see them performing and that the quality of service they keep promising will be delivered, and we need to see their plans as well in a bit more granular detail."

In terms of the network architecture, the concern is that operators will not be able to support much lower-latency 5G services -- which are deemed critical in vertical sectors such as healthcare and the automotive industry -- unless IT resources are housed much closer to end users and not in large, centralized data centers. (See The Growing Pains of 5G and Does Ericsson's 5G-for-Healthcare Biz Case Need Surgery?.)

"With a more granular core network and nodes all over the place, we can get down to the low turnaround times that 5G is capable of," says Prigg. "We can start to do some of that with massive MIMO and be more prepared for the 5G story."

But the investments needed to build lots of micro data centers will probably be substantial and most operators are focused on using 5G as a mobile broadband technology in the first instance.

That announcement prompted analyst speculation that Vodafone is gearing up for an aggressive rollout of 5G services using mid-band spectrum and non-standalone 5G technology, whereby a new 5G radio standard is used in conjunction with an existing 4G network.

Vodafone is expected to participate in a government auction of 3.5GHz spectrum later this year. Asked when 5G could make its first commercial appearance in the UK market, the operator's spokesperson said: "We can't say too much because of the auction coming up this year. It is largely dependent on that but the general opinion is still around 2019."

Next page: Learning from SoftBank