Verizon enjoys a commanding lead in the court of public opinion on 5G, according to the results of a new nationwide survey. 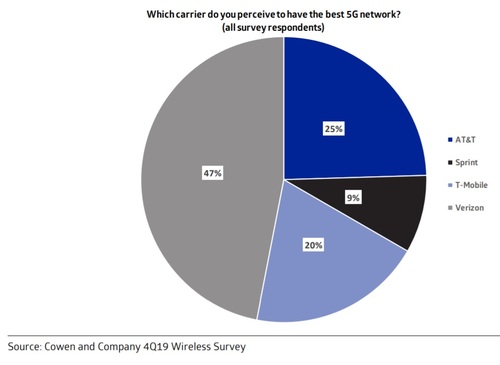 The results come from a survey of 1,015 people conducted by Wall Street research firm Cowen. The firm collected the results between Dec. 24 and Dec. 30 online "from participants meant to represent the US population natural fallout." The firm asked the question "Which carrier do you perceive has the best 5G network?" and the options were AT&T, Sprint, T-Mobile or Verizon.

"It appears Verizon's '5G Built Right' campaign, which is focused on its mmWave buildout (which is now live in 31 markets), is resonating," the firm wrote in its report to investors on the survey. However, the Cowen analysts pointed out that the 5G results also closely align with Verizon's overall brand perception among the survey respondents -- "thus Verizon could be enjoying collateral goodwill" in 5G.

It also probably didn't hurt that Verizon made 5G a central element of its nationwide advertising campaign throughout 2019 despite the fact that its millimeter-wave (mmWave) 5G network continues to cover just a tiny slice of the US population.

Specifically, Verizon spent an estimated $86 million in 2019 on TV ads with 5G in the title, according to iSpot.tv, which tracks TV advertisements across the country. Verizon's overall spending on the campaign was undoubtedly far bigger, considering that it spanned billboards, magazines, online sites, radio and other advertising mediums.

But it's also worth noting that AT&T spent roughly $90 million throughout 2019 on TV ads with 5G in the title, according to iSpot.tv -- just outpacing Verizon. AT&T, for its part, only began selling 5G to regular consumers at the tail end of December.

While 2019 may have been a 5G "branding event," the technology could get more tangible in 2020 as operators expand their 5G networks and the number of 5G devices they sell. Whether Verizon can parlay customer perception into 5G sales remains to be seen.