Verizon to Use 'Integrated Access Backhaul' for Fiber-Less 5G

New York -- Verizon's Glenn Wellbrock said he expects to add "Integrated Access Backhaul" technology to the operator's network-deployment toolkit next year, which would allow Verizon to deploy 5G more easily and cheaply into locations where it can't get fiber.

Wellbrock said IAB will be part of the 3GPP's "Release 16" set of 5G specifications, which the standards group expects to finalize early next year. However, Wellbrock said it will likely take equipment vendors some time to implement the technology in actual, physical products. That means 2020 would be the earliest that Verizon could begin deploying the technology, he added. 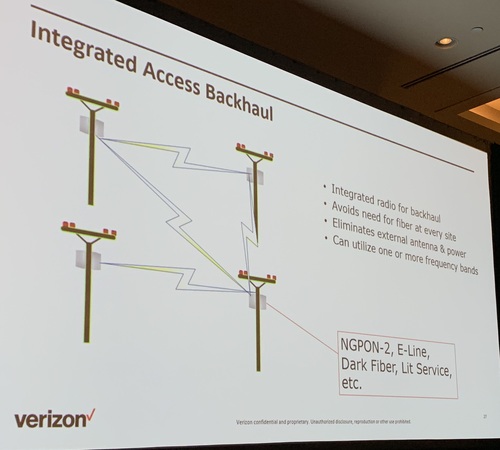 A slide about IAB presented today by Verizon at Light Reading's 5G Transport & the Edge event.

Verizon's embrace of IAB technology is important because the operator so far is overwhelmingly using fiber connections to backhaul traffic from its 5G transmission sites. That's a costly and potentially limiting requirement considering it means Verizon can only install 5G antennas into locations where it can obtain connections to fiber and electricity.

With IAB, Verizon could potentially install 5G transmitters in locations that only have electricity and not fiber because the antennas could backhaul their traffic via a wireless link to a nearby receiver. That receiver would likely need to be connected to a fiber network.

Wellbrock said IAB would allow Verizon to install 5G antennas into locations where routing a fiber cable could be difficult or expensive, such as across a set of train tracks.

However, Wellbrock said that IAB will be but one tool in Verizon's network-deployment toolbox, and that Verizon will continue to use fiber for the bulk of its backhaul needs. Indeed, he pointed out that Verizon is now deploying roughly 1,400 miles of new fiber lines per month in dozens of cities around the country.

He said Verizon could ultimately use IAB in up to 10-20% of its 5G sites, once the technology is widely available. He said that would represent an increase from Verizon's current use of wireless backhaul technologies running in the E-band; he said less than 10% of the operator's sites currently use wireless backhaul. He said IAB is better than current wireless backhaul technologies like those that use the E-band because it won't require a separate antenna for the backhaul link. As indicated by the "integrated" portion of the "integrated access backhaul" moniker, IAB supports wireless connections both for regular 5G users and for backhaul links using the same antenna.

That Verizon is looking for new backhaul options is not a surprise. The company is in the early stages of building what could ultimately be a massive new 5G wireless network. Further, the operator's 5G network could look much different from its existing 4G network, not only because it will provide faster speeds but also because it will require far more transmission sites. That's because Verizon is deploying 5G in millimeter-wave spectrum in major metro areas in the US, and transmissions in those millimeter-wave spectrum bands can't travel more than a few thousand feet at the most. As a result, Verizon will need to build thousands, and perhaps even millions, of new 5G transmission sites (each with backhaul and electricity options) in order to fully cover large swaths of the US population.

Verizon isn't alone in looking at IAB. AT&T too has hinted it might deploy the technology.

Fiber, IAB and E-band are just a few of the many backhaul options available to wireless network operators. Other options include everything from satellites to drones. Indeed, the cable industry has been pushing the idea that cable operators could offer backhaul connections for 5G through their existing DOCSIS networks, though a number of speakers here at the 5G Transport & the Edge event said DOCSIS could be used for backhaul but not for fronthaul, due to the low-latency requirements in fronthaul. Fronthaul involves connecting distributed antennas to a centralized processing function.

TelMe 10/16/2019 | 10:37:25 AM
5G, again not for less dense suburban or rural america As the next multi-billion dollar rebuild of Ameria's metro and dense suburban areas receive another next generation technology (7, 8 or 9th??) rebuild of their networks...the less dense suburban and rural areas of America receive crumbs and excuses...many are still on 2G cell service, spotty 3G if they are lucky and crumy DSL. Yet, Vz and AT&T still collect fees and taxes for universal funds to bring services to these areas...billions every year...but the funding never seems to reach the rural areas.
Reply | Post Message | MESSAGES LIST | START A BOARD