Verizon is clearly hungry for more spectrum, and in recent days has announced deals to purchase licenses from a variety of smaller spectrum owners in order to add to its holdings.

Verizon's efforts are important in light of ongoing concerns that the operator does not have enough spectrum to keep pace with users' demands and, ultimately, to roll out high-speed 5G on a widespread basis.

As Light Reading previously reported, Verizon already has been deploying antennas into its network that can support transmissions in the unlicensed 3.5GHz CBRS band. And, for more than a year, Verizon has been urging its handset suppliers to add 3.5GHz capabilities into their smartphones built for the operator.

As Goemmer explained, the proposed purchases essentially are designed to increase the amount of AWS-3 spectrum Verizon owns in select markets (Verizon's LTE network currently runs in part on AWS-3 spectrum). The more spectrum an operator owns, the more traffic they can handle on their network.

For example, Goemmer said Verizon will be able to increase the size of its LTE channels in the AWS-3 band from 10MHz to 15MHz with its Cypress Cellular acquisitions in Florida. 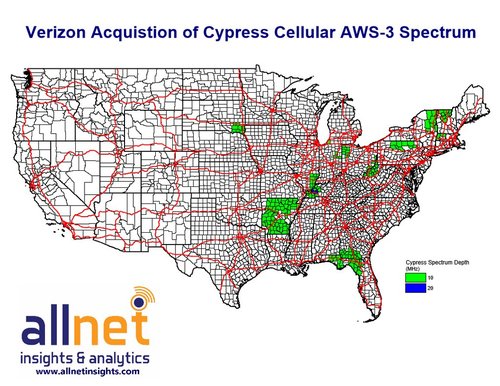 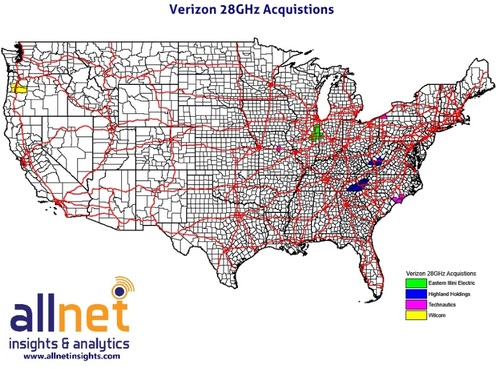 Verizon already owns the vast majority of the nation's available 28GHz spectrum licenses, mainly thanks to its 2017 acquisition of XO Communications. Those licenses form the basis of the operator's mmWave 5G network.

Then, earlier this year, it added to its 28GHz holdings during the FCC's Auction 101. And now, Verizon is showing its continued desire for 28GHz licenses in locations around the country with its latest transactions on the secondary market. (Company-to-company spectrum transactions are often referred to as purchases on the "secondary market." The primary market for buying spectrum remains FCC auctions.)

What's particularly interesting about Verizon's newest 28GHz purchases is that some of the licenses cover decidedly suburban and somewhat rural locations. For example, one of the eight licenses that Verizon bought from Wilcom covers parts of the Siuslaw National Forest in western Oregon -- not necessarily a hotbed of urban activity for a high-speed 5G mmWave network. 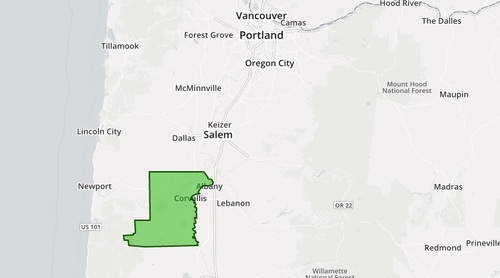 It's unclear whether Verizon has any plans to deploy a network using that particular license or if it's simply sitting on the license for some other purpose. Maybe the transaction was an all-or-nothing deal where Verizon picked up some licenses it needed and some it didn't. Maybe the price was just too good to pass up.

"Verizon plans to deploy a commercial 5G mobile network on this and other UMFUS spectrum to provide mobile broadband 5G service using 5G capable smartphones, mobile WiFi hotspots, and other devices as they become available," Verizon wrote in the FCC filing accompanying its deal with Wilcom. The company filed similar statements about its other 28GHz purchases. "Approval of this transaction will facilitate Verizons continued investment, innovation, and deployment of 5G technology that will benefit the U.S. economy and the millions of consumers, businesses, and government users that increasingly rely on wireless broadband and soon, 5G."

The company declined to comment on the topic of its recent spectrum acquisitions, including the financial terms of the deal.