Verizon today began selling the $1,300 Samsung Galaxy S10 5G to customers, the first US phone that features integrated 5G capability. Verizon is also juicing its Galaxy S10 5G offer with the promise of a $200 prepaid Mastercard if customers who switch to Verizon purchase the device and one of the operator's unlimited pricing plans.

Importantly, Verizon's 5G "Ultra Wideband" service is available only on its Above and Beyond Unlimited plans -- the operator is waiving its $10-per-month 5G fee for an unspecified length of time. Verizon's 5G service provides unlimited data, hotspot and 4K HD video streaming in the operator's 5G coverage areas.

Prior to its launch of the Galaxy S10 5G, Verizon's only 5G-capable device was the Moto Mod, an accessory that snapped onto a Motorola Z3 smartphone.

5G advertising
Verizon also appears to be ramping up its 5G advertising efforts in conjunction with the launch of the Galaxy S10 5G. According to Wave7 Research, which closely tracks US wireless network operators' advertising and promotional efforts, Verizon is now installing signs for 5G in some of its retail stores. For example, in a Verizon store in Kansas, Wave7 reported that Verizon is touting "the power of Verizon 5G." 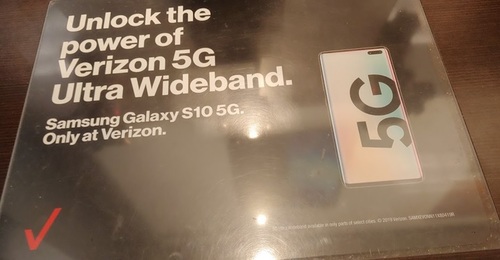 Verizon is installing 5G signs in some of its retail stores, such as this store in Kansas.
Source: Wave7 Research.

Verizon launched its mobile 5G service in Chicago and Minneapolis and is working to expand it to additional cities, including Kansas City, throughout this year.

Aside from signs, Wave7 reported that Verizon is also airing TV ads:

5G in the coming years
As Verizon uncoils its 5G marketing efforts, the operator isn't expecting any material revenues from 5G until 2021, according to CEO Hans Vestberg. Speaking at an investor relations event this morning, Vestberg explained that Verizon expects to generate revenues from 5G across four different business cases:

Further, Verizon's Vestberg explained that the operator is taking a slightly different approach to the 5G market as it did the 4G market. "I think we're slightly tweaked from 4G where we talked a lot about creating our own applications, creating our own devices and all of that," he said, explaining that in 5G Verizon will work to partner more with other companies for products and solutions.

"In some cases we'll have partners having the software for handling the robotics, I don't see us developing software for robotics. There are far better companies as us. But we're coming a level up from connectivity in that discussion. There might be areas [in 5G] like telematics, where we are really strong and we have the software, we do the connectivity, we do the network, and we do the applications because we have the software in telematics. But generally, we're a little bit more inclined to do big partnerships where we are leveraging our network, the best network, our distribution and our brand," he explained.