Verizon's capex range will be roughly the same in 2020 as the year prior, but Verizon intends to spend more heavily in the early part of the year, Verizon CFO Matt Ellis said on today's call. 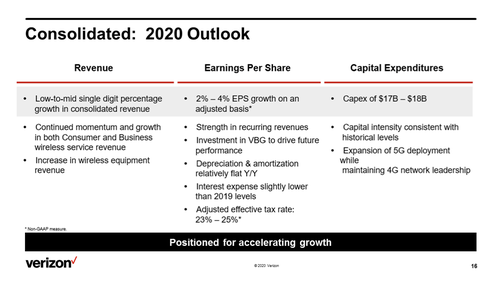 Ellis said Verizon's fiber build and 5G rollouts are closely linked at the moment, noting that many of the 5G sites being put up in Q1 2020 were backed up by third-party fiber. In contrast, "a significant majority" of those 5G sites went up on Verizon's fiber in Q4 2019, Ellis said.

Verizon's CEO said the operator's network is also ready for Dynamic Spectrum Spectrum Sharing (DSS). which allows the operator to share the same low and midband spectrum between 4G and 5G without having to allocate separate frequency blocks for each technology.

"The majority of our baseband is ready for DSS," Vestberg commented. Verizon's main 4G spectrum, which 5G would share, is in the 700MHz C block and 1700/2100MHz bands. Vestberg wouldn't say exactly when DSS will launch, but it is expected to sometime this year.

Verizon will launch DSS "when customers are ready," Vestberg said.

Verizon has said that it will launch 20 new 5G devices in 2020. Vestberg wouldn't comment on whether that 2020 list will include a 5G iPhone.

Despite 5G iPhone questions, Verizon had a good year for phone adds, racking up 790,000 net postpaid phone additions in the fourth quarter, and 1.4 million adds for the whole of 2019. Part of that rise was attributed to Verizon's Disney+ promotion.

"We had our best year since 2013 when it comes to phone net adds," Vestberg said.