Whoah, slow down, Philip. The UK's dull-as-dishwater finance minister, Philip Hammond (pompously known as Chancellor of the Exchequer, in official parlance), has delved into his £31 billion ($41.2 billion) National Productivity Investment Fund and found £160 million ($213 million) for spending on 5G infrastructure.

This marks a substantial increase on the £16 million ($21 million) the government set aside for 5G in March, and the £25 million ($33 million) it committed in October, but still shows that technologies invented by the Victorians are far more important to this government than anything conceived in the 21st century. (See UK Govt Finds Another £25M for 5G and UK Govt to Spend Loose Change on 5G.)

In contrast, the first phase of HS2, a new government-backed rail link that will shave minutes off journey times between London and Birmingham, is expected to cost as much as £27.4 billion ($36.4 billion), according to estimates from the UK's National Audit Office.

So What's This 5G All About, Then? 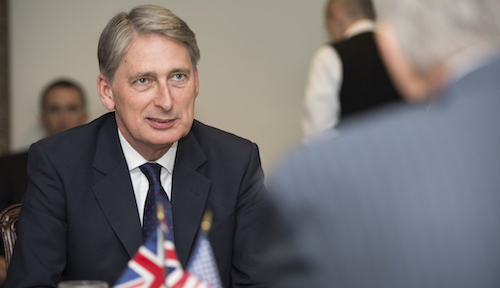 Philip Hammond, the UK's finance minister, gets the Union Jack out for next-generation technology.

As the global economy becomes more "digitalized," and people's homes increasingly double as their offices, HS2 looks anachronistic to most people who didn't spend their formative years at Eton, the UK's most exclusive private school, which foreign lunatic (sorry, secretary) Boris Johnson and former prime minister David Cameron both attended. By shortening journey times to London, it will certainly make it easier for people to work in the capital while living in Birmingham, driving up house prices in the Midlands while doing little to reinvigorate that region's local economy.

Ranting aside, government ministers reportedly expect HS2 to deliver "benefits" of more than £103 billion ($137 billion) for the UK economy. Assuming it gets launched in 2020, 5G will contribute £49 billion ($65 billion) to the UK economy by 2026, according to Mark Evans, the CEO of Telefónica UK Ltd. Whatever one makes of these figures, it seems pretty risible to suggest a single rail link carries more economic value than a form of connectivity that could support factory automation, self-driving cars, remote surgery and more.

Light Reading has been fairly critical of 5G as a potential revenue-growth opportunity for the telcos that provide 5G services. But that does not mean it will lack value for the companies and consumers using those services. Just look at the impact that existing mobile broadband technologies have already had. (See Let's Talk About 5G Efficiency, Not Wacky Services and The Growing Pains of 5G.)

Hammond's announcement, which formed a part of the UK's autumn budget statement, has met with the usual endorsements from stakeholders and analyst firms. While these are too anodyne to reprint in full, most carry the same message: It's great to see the government stumping up money, but more is needed.

That doesn't necessarily mean more money. Telefónica, predictably enough, is asking for a better regulatory framework and improved collaboration between the private and public sectors.

Coming from an operator, that is nothing new. But Telefónica makes a good point. What the industry really needs are rules and regulations that encourage investment and ensure that companies are competing on a fair and level playing field. Notwithstanding recent efforts to make Openreach, BT's infrastructure business, a more independent outfit, the UK market hardly seems equitable. Its fixed-line incumbent, after all, controls the biggest 4G operator and more spectrum than any of its mobile rivals. (See Europe's Backhaul Black Hole Looms Above 5G and Vodafone UK Boss Slams Openreach 'Stranglehold'.)

As it happens, the funding is both negligible and unnecessary. UK citizens are already paying for research into 5G through their monthly tariffs for broadband and mobile services. BT Group plc (NYSE: BT; London: BTA) alone spent £2.65 billion ($3.52 billion) on capital expenditure last year, more than 16 times what the government has committed to 5G. Major equipment vendors such as Finland's Nokia Corp. (NYSE: NOK) are also active in the UK market. No one will object to more funding, but £160 million ($213 million) will make not a jot of difference to the UK's future 5G competitiveness. Resolving a spectrum dispute between operators, which threatens to delay the auction of 5G licenses, just might.

But at least a funding commitment allows the government to say it is doing something. Its cluelessness becomes apparent when one looks through today's 89-page autumn statement. Around £10 million ($13.3 million) will go on building facilities for 5G testing and another £5 million ($6.7 million) for a trial of self-driving cars. As for the other £145 million ($193 million), it seems the government will worry about that later.