John Legere, the sharp-tongued CEO of T-Mobile US, likes spitting venom at bigger rivals AT&T and Verizon, or "Dumb and Dumber," as he has previously called them. He was at it again in late December, predicting "more AT&T 5G BS" this year and essentially arguing that Verizon's 5G coverage will be as spotty as a teenage face. (See T-Mobile & Sprint: Marriage made in hell.)

So it must have been embarrassing when respondents to a 5G Consumer Index survey sponsored by T-Mobile US Inc. ranked both Dumb and Dumber ahead of Legere's business in the 5G leadership stakes. Indeed, with 16% of votes, Verizon Communications Inc. (NYSE: VZ) beat 17 other named organizations when around 5,000 survey takers were asked which company they believe is the 5G leader today. AT&T Inc. (NYSE: T) garnered 7% of the votes cast, while T-Mobile scooped just 3%.

What One Company Do You Believe is the Leader in 5G Tech Today? 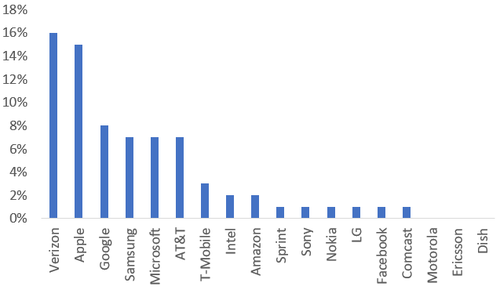 That is not the kind of detail you want in your press release, and so T-Mobile and HarrisX, the research company that ran the survey, talked up other results instead. Some two in three Americans believe 5G will be a reality by 2020, for instance, and 90% of people aware of 5G think it will be better than 4G.

Those results, however, are clearly less interesting than ones that didn't make it into the press release, but which can be found in a spreadsheet available via the 5G Consumer Index website. With 15% of votes, iPhone maker Apple Inc. (Nasdaq: AAPL) came just behind Verizon in the 5G leadership ranking, even though it appears to have had little involvement in developing 5G technology. Moreover, while the likes of Samsung Electronics Co. Ltd. (Korea: SEC) and Huawei Technologies Co. Ltd. are expected to unveil their first 5G handsets this year, many analysts do not think Apple will produce a 5G iPhone until 2020. (See iPhone Upset Leads to Apple Crumble and Apple Delivers Post-Holiday Turkey, Lowers Revenue Guidance.)

As for network equipment makers Ericsson AB (Nasdaq: ERIC) and Nokia Corp. (NYSE: NOK), which are leading the 5G charge in North America, they barely registered, picking up 13 and 30 votes respectively. That was at least better than device chipmaker Qualcomm Inc. (Nasdaq: QCOM), whose name didn't even feature in the survey.

Of course, the Average Joe can hardly be expected to know about companies that make arcane contraptions called eNodeBs and use words like "virtualization" in everyday conversation. It makes sense that Nokia was marginally ahead of Ericsson: Older Americans may vaguely recall it once had something to do with handsets and was even linked with Microsoft Corp. (Nasdaq: MSFT). Ericsson might as well be a tenth-century Viking.

Perhaps the most valuable takeaway is that Americans do seem to have an optimistic view of 5G, one that is hard to imagine existing in some other parts of the world. A small majority (51%) of respondents think it will create new job opportunities, and 64% said they were somewhat or very excited about 5G availability. About 55% of survey takers reckon it will enable the development of new technologies, while only a quarter said it would not.

Asking the same questions in Europe, and comparing results across the two regions, would be an interesting experiment. If Americans are the world's go-getters, then Europeans are often accused of being its tired cynics. And while there are hotspots of tech talent and innovation throughout Europe, it already appears to lag the US and parts of Asia in the race to 5G. Regulation typically gets the blame, but operators will be in no hurry to build 5G networks if they assume customers are not desperate to buy 5G phones. That is where a survey could help.

Clifton K Morris 1/9/2019 | 3:19:59 AM
Re: Ever seen Groundhog Day with Bill Murray? Well, Dan, they pushed back Release 15. ETSI doesnt create ANSI standards, so likely, they are looking for some contract to be signed, perhaps at CES.
Reply | Post Message | MESSAGES LIST | START A BOARD

5G is the latest generation of wireless that has pursued the holy grail of unified communications networks and devices.  The goal has changed over the years - its expanded to include more than what had been under the tent of mobile communications to include a unified approach to data networking as that once distinct field has commonly aligned on standards for virtualization, security, data mining, applications and interface across the PC/laptop, server, software environment, and device enclaves.

Each operator has its unique set of market, spectra, capital, and deployed network strengths and relative competitive weaknesses with which to prioritize the use of 5G.

Here are questions more people should be asking:

What new application or use case does 5G offer to consumers over the next six, 12, 24 months that they will find they can't fulfill with 4G? (or 3.5G for the matter).

Name one application that is the 'killer app' for 5G. Describe the ramp in bandwidth usage scenario that will cause users to flock to 5G in a similar way 4G caused a rapid update cycle.

4G came on the scene when data demands due to the popularity of the iPhone and Android had caused US operators to have problems keeping up.  AT&T's network bogged down.  The bandwidth demand accelerated the push by Verizon, AT&T, and T-Mobile into LTE, breaking new ground along with operators in but a few other countries including South Korea.  The rollouts of 4G were done using low-band 'beachfront' spectra, most of which had recently been made available by the FCC.  That greenfield spectra allowed Verizon and AT&T to rollout 4G-LTE rapidly with nationwide coverage.  That broad market approach convinced several vendors to come out with devices early in the deployment cycle.

5G 'is the same only different'

5G extends the unified communications platform to become the 'universal solvent' of most forms of communications on the planet including data transfer, media, and machine-to-machine and the smart network paradigm that is embedding AI into both the local and centralized network and users devices that interact with rather than serving as slave screens/speakers.

5G is a "platform for the future" that makes technology lovers lust for it to come about.

The problem is that 5G's impact is more the stuff of the future than meeting a vacancy that is now or soon will appear with 4G and the current devices.  5G will show up as an incremental improvement that most people will do without longer than they did for 4G unless operators give devices away in a return to 1/2 off subsidies.

The one mainstream market gap that offers the most hope for 5G to take on much better than 4G is the cable replacement market.  4G-Advanced is capable of supplying home broadband similar to Verizon's 5G Home service.  The problem both 4G and 5G have is the need to provide the 5-20X higher monthly bandwidth budget without bogging down the weakest link in the end-to-end service network.  These problems cause the use of largescale deployments of smallcells combined with base station antenna arrays in order for the higher frequency bands VZ and T have available can make business sense.  And that is why 5G is lumbering out, not rolling out, in handfuls of cities at a time.

Has this industry been taken over by 5th Avenue marketing madmen?

The way to ask who is ahead is to break 5G down into the major use case groups set some weights to how important they are to the health and progress of the industry.

Whether a poll of this sort has any meaning is left up to the readers.
Reply | Post Message | MESSAGES LIST | START A BOARD

DanJones 1/4/2019 | 4:58:00 PM
Re: Ever seen Groundhog Day with Bill Murray? Timing doesn't work with Release 16. They're supposed to start launching 5G cities around 1H19. Release 16 is supposed to be baked at 3GPP in March 2020 now. Unless you're suggesting they're going to be horribly late to market?
Reply | Post Message | MESSAGES LIST | START A BOARD

Clifton K Morris 1/4/2019 | 12:14:35 PM
Ever seen Groundhog Day with Bill Murray? Based on press releases, T-Mobile US is waiting for the version 16 of the 3GPP release. Its supposed to increase QAM symbol rate from 256 up to 1024. An increase in QAM is supposed to increase throughput and speeds similar to the new WiFi standard, 802.11ax. However, this 3GPP release hasnt been ratified yet.

T-Mobile also did this in the past with 4G. They waited for US companies to deploy HSPA, when it waited for HSPA+ (and LTE) to be formally submitted and recognized by European Standards Bodies.

The net result was that T-Mobile was able to legally advertise its speeds as faster due to the technology superiority while also poking fun at its US-competitors business decisions.

European-based Ericsson and Nokia will be able to sell double the amount of 5G equipment to US carriers to keep pace with T-Mobiles marketing claims.

T-Mobile also selected Nokia to manage its 5G build-out, effectively putting third party US-based engineering firms out of business. I havent seen any press releases that would signify a net increase in US Jobs being created outside of a call center environment.
Reply | Post Message | MESSAGES LIST | START A BOARD
EDUCATIONAL RESOURCES