Moving in the right direction
The good news is that open RAN players look increasingly capable of meeting service provider needs. When TIP issued a request for information (RFI) about 5G software based on open RAN technology, not one of the big three kit vendors responded. But the seven companies that did -- Altran, Altiostar, Mavenir, Parallel Wireless, Phluido, Radisys and Samsung -- were on average about 60% compliant with the RFI requirements, says Tenorio. "That is not a bad starting point at all."

Samsung, moreover, scored 80%, putting it some distance ahead of the rest. Much larger than other contenders, the South Korean firm showed its readiness to support O-RAN Alliance specifications and run its software on general-purpose servers, according to the Vodafone executive. Those results are partly what compelled Vodafone to press ahead with the European tender. "It tells us that to put 5G on open RAN, we are probably readier than we thought," said Tenorio during a presentation at the TIP Summit.

Vodafone has also been encouraged by recent open RAN trials with Mavenir in the UK and Parallel Wireless in Ireland. While the technologies are still not "fully interchangeable" or able to work on "pure, standard x86" servers, both those companies are moving in the right direction, says Tenorio. In the not-too-distant future, he is hopeful that operators will be able to use general-purpose kit without compromising on performance.

In the meantime, some important gaps remain. Open RAN, says Brown, is still "a release or two behind" the mainstream 5G market. "They need to catch up on features and functions. If they can close the gap from two years to a year or six months, it will become more interesting." Tenorio reckons "massive MIMO," an advanced antenna system that boosts mobile performance, is a "difficult thing for open RAN to crack." That partly explains why operators today see open RAN as a good option for less demanding rural markets, according to Brown.

Some industry experts remain entirely unconvinced by open RAN. John Strand, the CEO of advisory firm Strand Consult, does not buy into the cost-saving argument. Profit margins at Ericsson and Nokia are already wafer thin, he notes. Minus restructuring charges, Ericsson managed an operating margin of just 4.4% in 2018, while Nokia barely broke even. That does not suggest operators are being overcharged, especially when their own margins are much healthier. Operators would save more by cutting unnecessary jobs, he says. "You could get rid of half the people working for Vodafone and you wouldn't see any impact on the company," he proclaims.

Yet operators insist otherwise. Internet para Todos, a Peruvian joint venture between Facebook, Spain's Telefónica and two Latin American banks, has built a wholesale network in Peru using both traditional and open RAN technology. At the open RAN sites, where Parallel Wireless is the main supplier, capital expenditure on electronics was half as much as in the traditional RAN provided by Huawei, says David del Val, the CEO of R&D for Telefónica. 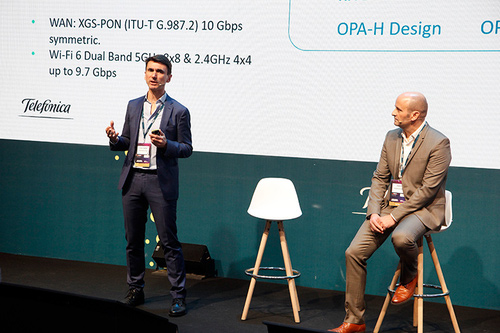 Perhaps the biggest open RAN challenge is to do with the operational complexity it may bring. A single giant vendor gives operators "one throat to choke," says James Crawshaw, a senior analyst with Heavy Reading. An open RAN network featuring multiple vendors means there are more numbers to call when something goes wrong, says del Val.

Tenorio's announcement has certainly grabbed the industry's attention. One TIP Summit attendee who works for an investment bank says you could hear a pin drop when the Vodafone executive revealed details of the tender. It is no bluff, Tenorio insists. "Operationally, swapping out kit is not necessarily what we want to spend time doing, but the outcome is bigger than that," he says. A few months from now, when the tender results are in, the industry will have a better sense of just how disruptive the open RAN could be.