Qualcomm says its new millimeter wave RF antenna will fulfill the gigabit-speed promises of 5G for smartphones, as early as the first half of 2019.

Qualcomm's director of 5G marketing, Sherif Hanna, says that the idea is to use mmWave modules with the Qualcomm modem and install three or four around the edge of the phone. "We have these up and running in the lab," he says. 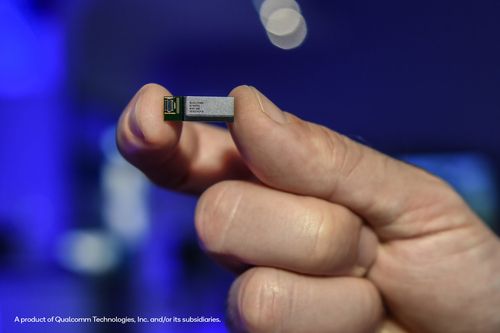 As Light Reading has reported, mmWave makes life difficult for cellphone designers. This is because of the "proximity effect," where human hands or bodies can completely block the high-band signal when holding the phone. The 28GHz mmWave spectrum that will support 5G, particularly in the US, is much higher than has been used in cellular service before, and does not propagate well. (See 5G Will Change How Your Smartphone Is Designed.)

With the X50 modem and new modules, a smartphone will be able to switch mmWave beams between the antennas on the phone, if one of the beams is blocked by a hand (or something else), says Hanna. Interestingly, he did show how the modules would fit in the bevels around the edge of the Qualcomm 5G test platform smartphone. But he did not want Light Reading to photograph the phone, which looked smaller than an earlier prototype Qualcomm showed off. (See Qualcomm: The First 5G Smartphone on Display?.

After talking to vendors, Light Reading expects the majority of global 5G rollouts to happen in sub-6GHz frequencies. In the US and South Korea, however, we can expect 28GHz -- and possibly 39GHz -- mmWave deployments, as well as sub-6GHz deployments.

Hanna believes the RF modules will give Qualcomm a jump on the competition for high-band 5G. "We're pretty confident we're going to be the only millimeter wave 5G solution, at least for smartphones," he said.

Hanna expects to see 5G mobile hotspots, using Qualcomm silicon, out before the end of the year. 5G smartphones should be out during the first half of 2019. (See Qualcomm: First 5G Smartphones Coming Mid-2019.)