Switch on your smartphone and tiny letters at the top of the screen handily indicate whether you are using a 3G or 4G data network. How soon 5G pops up could depend on marketing abuses as much as network readiness, according to Scott Petty, the chief technology officer of Vodafone UK.

"The need for 5G creates an opportunity for non-tech people to sow confusion and tag 4G features as 5G," he said during the 5G World Summit in London last week. "What features have to be enabled for a smartphone to decide if it is offering 4G or 5G?"

Misleading labels are just one of the 5G issues that concern the Vodafone UK man as he gears up for the rollout of the next-generation mobile technology. Despite gloom that Europe is trailing the US and parts of Asia in the march to 5G, Vodafone's UK business could launch its first 5G services next year, putting it in the vanguard of the 5G movement. There is a lot to figure out before that happens. 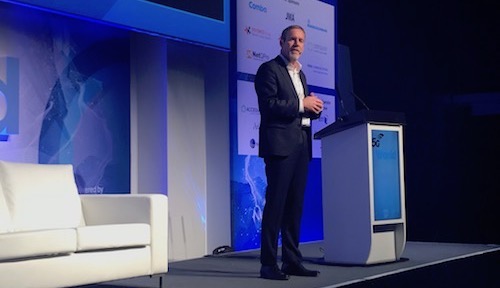 What now looks certain is that Vodafone -- along with many other European operators -- will use 5G first as a bigger pipe in areas where mobile data is gushing like an oil blowout. That has driven Vodafone toward the "non-standalone" variant of 5G, which combines the 5G New Radio (NR) standardized in late 2017 with an existing 4G network, to support mobile broadband services in urban hotspots. (See 5G Is Official: First 3GPP Specs Approved.)

This makes commercial sense because 5G is about four times as "spectrally efficient" as 4G, according to Petty, and therefore a less costly option. Lowering operating expenses may be the only way to improve margins, in this mobile broadband scenario, as Vodafone does not expect consumer spending to rise with the introduction of 5G. "We need to find a way to service customers more cost effectively," said Petty.

Some hint of where Vodafone might concentrate its efforts came this week, with the announcement that 5G trials in seven UK cities will start in October. Engineers are now preparing 40 sites in Birmingham, Bristol, Cardiff, Glasgow, Liverpool, London and Manchester. Petty thinks 5G might additionally have a UK role as an alternative to fixed broadband in some communities. Vodafone is also in talks with business customers in its trial cities about testing new 5G applications.

These business services, many of which fall into the "Internet of Things" (IoT) category, will probably not arrive in a hurry, said Petty. As a result, the recently finalized "standalone" version of 5G, which unites the 5G New Radio with a 5G core, is unlikely to be an immediate priority for Vodafone. "The only thing that would change that is a massive drive for IoT apps that can't be served by 4G," he said. "I am skeptical this will happen in the next three to five years." (See 3GPP Done With 5G SA Specs. Now the Hard Work Begins.)

Frustration at the shortage of demonstrable, new "use cases" for 5G was palpable at the 5G World Summit. Slow progress in this area inevitably harms 5G's prospects as a revenue-growth opportunity, and puts greater pressure on the industry to make 5G as cost-efficient as possible for mobile broadband. Yet Petty cautioned against expectations that 5G would quickly become a mass-market mobile phenomenon. If it follows the same adoption curve as 4G did after standardization, only 50% of customers will be using 5G services by the mid-2020s, he said.

Without some magic in the market for end-user devices, this transition might take even longer. There can be little doubt that 4G received a massive boost from the iPhone revolution and subsequent emergence of stylish new phones. Petty's concern is that innovation in smartphone design may have reached its limit. Even if the promise of faster connectivity persuades consumers to upgrade, mass-market handsets will not appear until late 2019, he said. The suggestion is that network operators may be waiting for device makers to catch up.

This lag is especially pertinent when it comes to new form factors. Wearables might ultimately hold greater 5G appeal than smartphones, but Petty has little visibility of when truly captivating new devices will arrive. The industry will also need to work out how to integrate 5G chips into some of the emerging IoT devices.

Next page: Shipshape and Bristol fashion