Arnaud Vamparys, despite his surname, is neither bat-like nor bloodthirsty. But the Orange executive has been flitting around Transylvania, sinking his teeth into a 5G project that could have a major bearing on Orange Romania's broadband business. (See Orange Romania Weighs Fixed 5G for Broadband Expansion.)

As of today, Orange Romania has a beefy presence in the mobile market, with about 9.5 million customers, but only a marginal one in broadband, with around 200,000. In a country with about 19.7 million people and 7.3 million homes, that broadband figure looks disappointing.

It points first to Romania's broadband immaturity compared with leading European countries. Even now, only about two thirds of homes can access fiber-based networks, says Liudmila Climoc, Orange Romania's CEO. But that still puts Orange a long way behind its largest rivals in what is, admittedly, a highly fragmented market. Deutsche Telekom AG (NYSE: DT), which owns the former state-backed monopoly, serves around 1.2 million broadband customers, even though it trails Orange in mobile, with 5.2 million.

The greater competitive concern is perhaps Vodafone. In the mobile market, Vodafone Romania is only just behind Orange, with 9.2 million subscribers. But following a planned merger with cable giant Liberty Global Inc. (Nasdaq: LBTY), it will have 600,000 broadband subscribers, too. Orange has already lost 360,000 mobile customers since September. If Romanians increasingly opt for providers that can offer the full range of fixed and mobile services, a broadband-anemic Orange may be vulnerable to even bigger mobile losses. (See Vodafone Pounces on Liberty Cable Assets in 18.4B Deal.)

Broadband expansion is not easy, though. While Orange signed a wholesale agreement with Deutsche Telekom in 2016, only about 50,000 of its broadband customers are on fixed-line networks. The other 150,000 are actually using 4G to receive broadband connectivity, it emerged at a press conference in Transylvania this week. And as more advanced services become popular, 4G technology may struggle to measure up.

Enter Vamparys, the senior vice president of radio networks for the Orange (NYSE: FTE) group, and the emerging 5G standard. In the US, operators including Verizon Communications Inc. (NYSE: VZ) have talked at length about using 5G to provide residential broadband services in areas that are hard to reach with fiber. (See Verizon's Fixed 5G: Are You Ready for the Wireless Gig Rush?.)

Orange now has similar ambitions in Romania, with Vamparys given the task of communicating the strategy: For those of a certain age, "Trans Vision Vamp" seems like an appropriate sobriquet for the Orange exec. 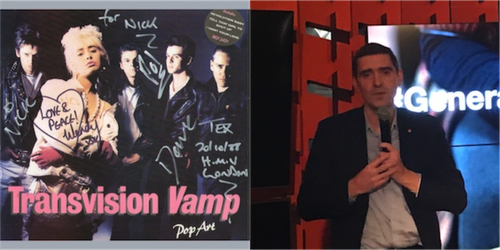 On the left, the 1980s pop group; on the right, Arnaud Vamparys, senior vice president of radio networks for Orange.

Following successful customer trials in the last few weeks, it thinks 5G could feasibly provide broadband connectivity for around 10% of Romanian homes. At around 730,000 households, that would be more than three times as many as Orange currently serves.

On the plus side, Orange's 5G trials have delivered better results than it had expected, and been well received by customers. Using radio technology from Samsung Electronics Co. Ltd. (Korea: SEC), and core network gear from Cisco Systems Inc. (Nasdaq: CSCO), the operator recorded connection speeds of about 3 Gbit/s with four simultaneous downloads, and peak speeds of 6 Gbit/s. The 15 homes taking part in these trials seem delighted with the service, judging by the feedback Orange shared with reporters. Some even preferred it to their existing fixed-line services.

The challenge will be to make the business case add up. Asked by Light Reading how 5G rollout costs compared with the expense of deploying fiber, Vamparys said there were "no figures yet." Similarly reluctant to share details, Climoc acknowledged that funding needs would be substantial. "We know this technology will require significant investment on the technology layer and on spectrum," she said. "It is still too soon to talk about the business case."