Nokia suffered a setback at the start of 2019, experiencing what its CEO and CFO described as a "weak" financial quarter, the severity of which took investors and analysts by surprise.

The vendor generated revenues of just over 5 billion (US$5.57 billion), up slightly year-on-year due to favorable currency exchange movements, but it reported an operating loss of 524 million ($584 million), much worse than a year ago and a great deal worse than the markets had expected, despite CEO Jajeev Suri having issued a warning in January when Nokia reported a very positive end to 2018.

That loss, plus the fact that key rival Ericsson last week reported a positive financial first quarter, sent Nokia's share price plunging by almost 9.4% to 4.68 in morning trading on the Helsinki exchange. (For more details on the results and Nokia's commentary, see the vendor's lengthy press release.)

So what's Nokia's problem? It appears to be twofold. First, revenues from new 5G-related business are not being recognized as quickly as had been anticipated, but at least they're still on the way (the sales haven't disappeared). Nokia is also referencing the "evolving readiness of the 5G ecosystem" as a factor in this, suggesting it has hit some hurdles in delivering all of the necessary elements that customers require: It's worth noting there have been suggestions the Finnish vendor has slipped behind in some 5G deliveries in South Korea and that Nokia hasn't exactly offered a major rebuttal of the speculation.

The second, and more concerning, is the impact of the aggressive competitive pricing among the main radio access network (RAN) infrastructure vendors as they seek to forge early 5G relationships with operators that, they all hope, will last long enough to deliver profitable (rather than loss-leading) revenues. In addition, product costs in the early stages of 5G are high, before scale kicks in. In the near term, those costs and the intense competitive environment is hammering Nokia's margins in its Networks division (as we'll see below).

Nokia's management is indicating, currently, that the first quarter should be regarded as a blip and not an indication the company is entering a downturn or being overrun by rivals such as Ericsson, Huawei, Samsung. "It's fair to say the quarter was weak, as anticipated. We expect to see a soft first half followed by a more robust second half," CFO Kristian Pullola tells Light Reading Thursday morning.

The CFO is keen to point out some first-quarter bright spots in Nokia's portfolio -- IP routing, optical transport, licensing, enterprise -- but at the end of the day it's the mobile (radio access network) business that is the main driver, and "this is where the weakness was," admits Pullola, despite 36 commercial 5G contracts having been signed.

That weakness is evident in these following charts from the company's first quarter slide deck for the Networks division of Nokia, which accounts for about 80% of revenues. They show gross and operating margins diving in the first quarter following relative stability, and even some growth, during 2018 and despite a slight uptick in year-on-year reported revenues: 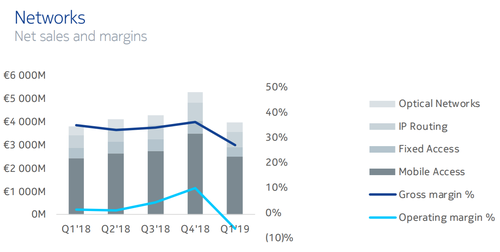 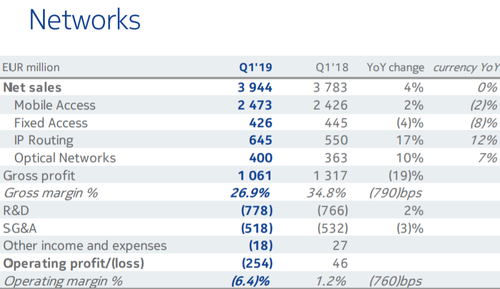 Pullola noted that Nokia "had anticipated some aggression in early [5G] deals and that is coming through. There is intensity in selective customers, and there may be a need for us to respond in a disciplined way." He declined to identify any specific customers or markets.

He added that Nokia has played its role "in the normal intensity we see in any technology transition," but that the vendor was keeping an eye on the "long game" and the impact of any decisions on profitability. "This is a long investment cycle," he added, noting that Nokia is hoping its broad portfolio that includes optical, routing, fixed broadband and virtualized network functions, will "play out" as operators look for integrated systems.

But, notably, the CFO said that if the market intensifies further, then Nokia's margin guidance might be put under pressure.

In the near term, though, Nokia will be keen to get some 5G-related revenues into its coming quarterly reports. Pullola said the shortfall -- Nokia stated it has been "unable to recognize approximately 200 million ($222 million) of net sales related to 5G deliveries mainly in North America" during the first quarter -- was due purely to the timing of revenue recognition. "Some people have reached the wrong conclusion that this means we have lost deals -- that is not the case." (Nokia has 5G deals with AT&T, T-Mobile, Sprint and US Cellular in the US.)

And, at least currently, Nokia believes it is holding its position in the market: The CFO noted that, viewing the market from a rolling four-quarter perspective, Nokia had not noted any "material shifts" in market share following a 2018 during which, by its own analysis, it grew faster than the overall market for telecoms infrastructure.

And for the time being, there is no need to expand on Nokia's current restructuring process, which is targeted to deliver annual operating cost savings of 700 million ($778 million) after 2020.

It's worth noting, also, that Nokia has been unable to offload its subsea networks unit, ASN (Alcatel Submarine Networks): Talks with "a potential French buyer" (it was Ekinops) have ended and Nokia is now assessing what to do with the unit, noted Pullola.

The next quarter's report will be telling for Nokia -- it will need to show some financial spoils of its touted 5G success and be seen to be keeping pace with its rivals, especially if Ericsson continues to prosper. And Huawei, of course, is still boasting significant growth, despite its challenges in multiple markets: The Chinese giant is generating much of its growth from its device business, but Nokia will continue to be compared with the overall fiscal health of its main rivals, whether it likes it or not.